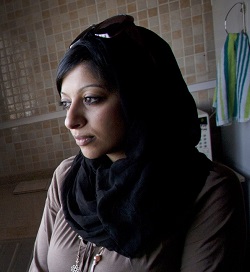 Manama, Bahrain: Irish Delegation: 15th July 2011: New hope for Irish-trained medics imprisoned in Bahrain as Irish delegation concludes visit. The Bahraini Minister for Health has told an Irish delegation that she will appeal to King Hamad to release on bail the 14 medics who remain in prison following anti-government protests last March. Over the course of two days, the delegation met a wide range of groups. Doctors who had previously been in custody recounted how they had been subjected to torture and degradation. The families of those still in prison expressed concern about their loved ones. Meetings were also held with the Minister for Health, the Undersecretary for Foreign Affairs and representatives of the public prosecution service. And a visit was made to the home of Nabeel Rajab, the head of the Bahraini Centre for Human Rights who showed the delegation how his house has been targeted with tear gas for speaking out about human rights abuses in his country. Picture Conor McCabe Photography. © copyright 2011