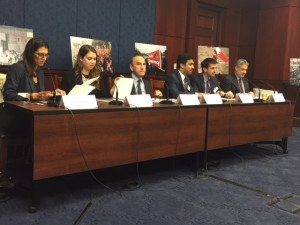 On 16 November 2015, Americans for Democracy & Human Rights in Bahrain (ADHRB) hosted a panel discussion at the US Capitol entitled “Bahrain’s Stalled Path to Reform.” The event coincided with the release of ADHRB’s newest report, Shattering the Façade: A Report on Bahrain’s Implementation of the Bahrain Independent Commission of Inquiry (BICI) Recommendations Four Years On, and provided a corresponding discussion of the current status of human rights and political reforms in the country. 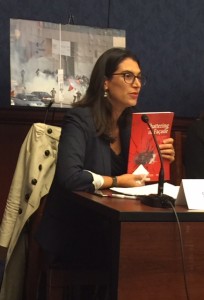 Sarah Margon, the Washington Director for Human Rights Watch, moderated the panel, which included Elliott Abrams, Senior Fellow for Middle Eastern Studies at the Council on Foreign Relations; Dr. Robert Herman, Vice President of Regional Programs at Freedom House; Kate Kizer, US Advocacy Officer at ADHRB; Dwight Bashir, acting Co-Director of Policy & Research at the US Commission on International Religious Freedom (USCIRF); and Matar Ebrahim Matar, a former Member of Bahrain’s Parliament representing the al-Wefaq Political Society. Sarah Margon opened the panel by welcoming the audience and introducing the panelists. To begin, she noted the release of ADHRB’s new report, Shattering the Façade, which she described as a “granular and nuanced look” at the implementation of the BICI recommendations. 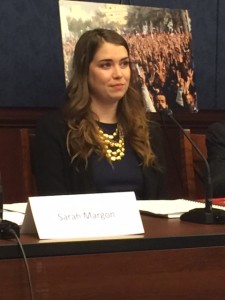 Kate Kizer began by introducing the focus and content of the report. Following the violent response to the 2011 unrest, the government established the BICI in order to review the situation and provide recommendations for reform. The BICI produced a 500-page report highlighting abuses and excessive force on behalf of the Bahraini authorities. To address these problems, the BICI issued 26 recommendations to the government. As this month marks the fourth year since the establishment of the BICI, Ms. Kizer noted, the new report analyzes the degree to which the Government of Bahrain implemented these recommendations. Despite its claims to the contrary, ADHRB’s findings suggest that the government has only fully implemented two recommendations, with the remaining 24 unimplemented or partially implemented. Ms. Kizer closed by stating that the government has failed to even partially implement eight of the most important recommendations, those that address the root causes of unrest: the criminalization of free expression, the lack of political inclusion, and the widespread use of torture. 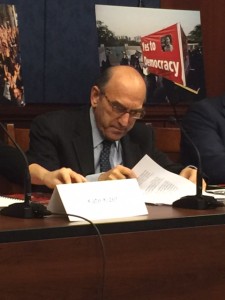 Elliott Abrams spoke about US security interests in Bahrain. First, he noted that ADHRB’s new report is a reminder of how important and excellent the original BICI report was. He described the government’s failure to fully implement its recommendations as “a tragedy of missed opportunity.” Mr. Abrams argued that now, four years later, there is more social division than in 2011 at the height of unrest. The consequent instability has undermined Bahrain’s financial interests and put its valuable security relationship with the US at risk. If the problems highlighted in ADHRB’s report persist, Mr. Abrams concluded, it will be a recipe for more instability and violence. Bahrainis may begin to see US forces as tacit defenders of a repressive monarchy, and the US may face pressures to remove its military presence. Therefore, the US has a clear interest in bringing about a more equitable situation. During the follow-up Q&A session, Mr. Abrams fielded a question on the US counterterror relationship with Bahrain, arguing that human rights cannot be neglected for more narrowly defined security concerns: “Law and order and justice are part of the fight against terror. Unjust repression is not part of the war on terror.” 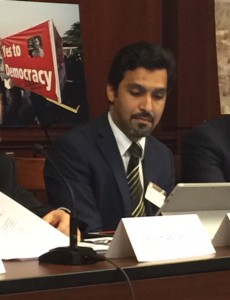 Matar Ebrahim Matar then reviewed five indicators to determine if there has been positive change between 2011 and 2015 in Bahrain: torture, arrests, discrimination, religious freedom, and revocation of citizenship. In all of these areas, he found that progress has effectively stagnated or that that the situation had deteriorated even further. Although 2011 was more violent, for example, the authorities still regularly use torture to coerce confessions, arrests are on the rise, and innocent citizens are facing denaturalization. The government may have rebuilt Shia mosques, but it has also increased its use of discriminatory sectarian policies in the media and in the workplace. Mr. Matar closed by suggesting that the Bahraini government and the current US administration are in denial of the deteriorating human rights situation, seeing gradual progress where there is the opposite. 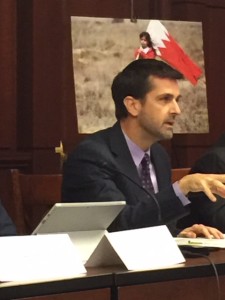 Dwight Bashir discussed religious freedom in Bahrain, asserting that that while there were serious problems before 2011, they are far worse now. In comparison with the rest of the Gulf, Bahrain treats non-Muslim minorities very well, he noted, but the government has long discriminated against its Shia majority. Mr. Bashir argued that these previous forms of discrimination have since evolved into outright policies of sectarianism. As a result, he has observed increasing extremism within both the Sunni and Shia communities. He pointed to the government’s reconstruction of Shia mosques as a positive step, but he added that it is unclear if such progress has translated into less discrimination, arbitrary arrest, and abuse of Shia protestors. On an optimistic note, increased international pressure might be forcing some officials in the Bahraini government to consider change, albeit behind closed doors. 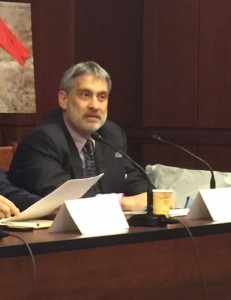 Dr. Robert Herman ended the panel discussion by noting his frustration that, four years on from the original unrest, Bahraini human rights situation has evidently gotten worse. Due to increased extremist violence in MENA region, he also expressed concern that Bahrain will not get the attention it deserves, as it is also a key part of the broader regional trends. Dr. Herman pointed out that people will turn to radicalization in unstable environments, or those wherein they cannot address their legitimate grievances through the political process. In Bahrain, the international community must not “succumb to the false tradeoff between ‘stability’ and ‘democracy and human rights.’” If the Bahraini government and its allies do not implement such reforms, they will be securing a “pyrrhic stability” at best. Drawing on ADHRB’s new report, Dr. Herman concluded that the government has failed to implement the BICI recommendations due to an absence of political will to address the unequal distribution of political power, not a lack of capacity. “The façade has been shattered,” he said, “There is no demonstrable improvement.” Rather than create an environment for civil society, or protect fundamental freedoms, the authorities have exercised their control of the media to censor and further criminalize free expression. “The Government of Bahrain has shown itself to be afraid of its own citizens and has characterized activists as sowing the seeds of division,” Dr. Herman stated, “which is quite ironic when you consider who is really responsible for widening divides in Bahrain.”

Click here for a PDF of this event summary.