During the last four months of 2015, Bahraini authorities made over 400 arrests, averaging roughly 105 arrests per month. Americans for Democracy & Human Rights in Bahrain (ADHRB), the Bahrain Center for Human Rights (BCHR), and the Bahrain Institute for Rights and Democracy (BIRD) have collected and analyzed data on this recent wave of arrests, finding that police officials consistently acted in contravention of international law. In the vast majority of cases, arresting officers failed to provide a warrant or a reason for detention; and arrestees reported having been subjected to excessive force, ill treatment, and torture.

The International Covenant on Civil and Political Rights (ICCPR), to which Bahrain acceded in 2006, requires state security forces to observe certain guidelines when undertaking arrests in order to ensure that the rights of individuals are protected. Article 9 of the ICCPR states that “No one shall be subjected to arbitrary arrest or detention,” and that “anyone who is arrested shall be informed, at the time of arrest, of the reasons for his arrest and shall be promptly informed of any charges against him.” Of the hundreds of arrests recorded by ADHRB, BCHR, and BIRD during the 16-week documentation period, 76 percent failed to meet these standards. The data suggests that for Bahrain’s security forces, adherence to the ICCPR is increasingly becoming the exception, not the rule.

Note: The following analysis is based on data independently collected by ADHRB, BCHR, and BIRD. Unless otherwise specified, it refers only to the actions of Bahraini security forces from 31 August 2015 to 31 December 2015.

Over the course of four months, ADHRB, BCHR, and BIRD tracked the number of arrests effected by Bahraini authorities, recording the legality and circumstance of each case. We found that government forces detained at least 421 individuals, including 53 minors. Additionally, we found that eight distinct circumstances accounted for 95 percent of arrests, listed as follows in order of frequency: house raids, streets and public spaces, prisons,[1] checkpoints and travel hubs,[2] courts, hospitals, traffic offices, and formal court summons (see Figure 1).[3] For clarity, the circumstances of arrest will hereafter be referred to as the arrest category.

The data indicates that Bahraini security forces effected 219 arrests during raids on private homes, representing more than half the total number of documented arrests and the highest number of arrests in a single category. The next most common categories of arrest were public spaces with 76 arrests, checkpoints and travel hubs with 53 arrests (particularly those checkpoints along the King Fahd Causeway between Saudi Arabia and Bahrain, which accounted for 39 percent of all checkpoint and travel hubs arrests), and court summons with 30 arrests.

Altogether, security forces carried out 76 percent of the 421 total documented arrests in violation of Article 19 of the ICCPR, resulting in the unlawful detention of at least 319 individuals. 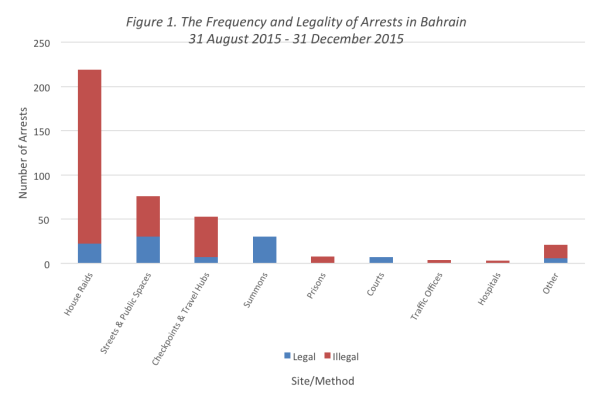 Arrests during raids on private homes accounted for not only the vast majority of illegal arrests, but the majority of total arrests as well. According to the data collected by ADHRB, BCHR, and BIRD, Bahraini authorities made 197 out of 219 of these arrests illegally, indicating that 90 percent of all house raid arrests were unlawful. Moreover, unlawful house raid arrests accounted for up to 52 percent of all arrests conducted during the documentation period.  In other words, one in every two people arrested in Bahrain during the documentation period was illegally arrested in his own home.

Testimony provided to ADHRB, BCHR, and BIRD by witnesses and victims suggests that house raids typically followed a pattern. Security forces often conducted house raids suddenly and at night. At the start of a raid, police officials reportedly surrounded and entered the target home without warning. Once they gained entrance, the authorities searched the house, arresting one or more residents and/or confiscating personal property. During the house raids that occurred in the documentation period, security forces rarely presented an arrest or search warrant.

After they had taken one or more individuals into custody, the authorities commonly transported the detainee(s) to a Ministry of Interior facility such as a police station or an office of the Criminal Investigative Directorate (CID). Arrestees and witnesses regularly reported having been subjected to physical or verbal abuse during house raids, as well as in the processes of arrest and transportation.

Individuals detained at checkpoints and travel hubs reported that arresting officers rarely informed them of a reason for their arrest. Virtually all arrests on the causeway and at the airport failed to meet the standards laid out in Article 9 of the ICCPR, while only 41 percent of miscellaneous checkpoint arrests were conducted in accordance with its provisions.

As noted, streets and public spaces tied with checkpoints and travel hubs for the second-highest number of unlawful arrests, at 46. The data indicates that 60 percent of all street arrests conducted by the authorities failed to meet the standards of the ICCPR.

Witnesses and arrestees reported that Bahraini security personnel generally undertook street arrests either at random, while on patrol, or during targeted sweeps of areas commonly used to hold demonstrations. In the majority of these cases, the authorities failed to provide a warrant or any reason for arrest. A number of these individuals also reported that the arresting officers employed excessive force.

Individuals that have been unlawfully or arbitrarily detained by the authorities are at a heightened risk of experiencing further human rights and due process violations as they progress through the Bahraini criminal justice system. Arrestees reported to ADHRB, BCHR, and BIRD that security personnel physically and verbally abused them during and after their arrests. They described being beaten with batons and wooden sticks as well as being kicked and punched. The authorities also subjected a number of arrestees to enforced disappearance for periods ranging from several hours to up to three weeks. During this period, government officials reportedly interrogated the accused without any legal representation. As such, the inherently extrajudicial nature of unlawful and arbitrary arrests contributes to broader violations of due process, infringing on the right of the accused to a fair trial.

According to our findings, Bahraini state security forces consistently violated international guidelines for arrests during the period between 31 August and 31 December 2015: only 24 percent of the arrests conducted during these 16 weeks were conducted in accordance with international law. Although Bahraini legislation ostensibly guarantees the rights to individual liberty and security of person, the data suggests that Bahraini authorities regularly flout their domestic legal obligations. Additional human rights and due process violations associated with arbitrary detention only aggravate these routine abuses of power. That the agents of Bahraini law enforcement so frequently violate their domestic and international obligations not only undermines the rule of law; it leaves the country’s most vulnerable citizens little recourse for justice.

[2] The ‘checkpoints and travel hubs’ category includes arrests at government security checkpoints along the country’s roadways and at Bahrain International Airport.

[3] An additional 5% of arrests failed to meet any of the defined categories and are listed as ‘other’.