Since October 2013, Americans for Democracy & Human Rights in Bahrain (ADHRB) has regularly received complaints regarding individual allegations of human rights abuses in Bahrain. Generally, these complaints contain information communicated directly from the victim or the victim’s family, and concern the victim’s treatment at the time of arrest, during detention, and – in some instances – during trial. After processing and documenting these allegations, ADHRB submits the information as a formal complaint to the Special Procedures of the United Nations.

Based on the information provided in these complaints, ADHRB, the Bahrain Center for Human Rights (BCHR), and the Bahrain Institute for Rights and Democracy (BIRD) have compiled a comprehensive database on human rights violations in Bahrain. ADHRB, BCHR, and BIRD have used this data to examine the trends in arrest and detention practices employed by the Bahraini authorities. The subsequent analysis demonstrates that the Government of Bahrain has systematically violated both human rights and due process rights as a means of silencing dissent.

Note: Though the complaint program began in October 2013, the complaints received by ADHRB include information pertaining to events that occurred in 2011 and 2012. As such, the documentation period ranges from 2011 to 2015. The subsequent analysis is based on data from this period.

ADHRB has documented and submitted complaints to the Special Procedures of the United Nations concerning the arrest of 495 Bahraini citizens, of which at least 71 were minors at the time of their arrest.

According to the database based on these complaints, ADHRB, BIRD, and BCHR have found that the authorities presented a warrant for only three of the 495 arrests. The majority of these arrests occurred at the victim’s home or at the home of a relative or friend, and 126 victims reported that the arresting forces did not present a warrant upon their arrest. Additionally, 71 victims reported that the arresting forces also conducted a search or seizure without a proper warrant. Security forces reportedly used violence during 116 of these arrests. No information was provided regarding arrest warrants for the remaining 366 victims.

The data indicates that the authorities also disappeared 89 victims following arrest. Most of these victims have reported that they were held at the General Directorate of Criminal Investigations (CID) during their disappearance. These disappearances have lasted anywhere between a few hours to months, and most victims were disappeared for a period of between several days to multiple weeks.

Of the complaints submitted to the Special Procedures, ADHRB, BIRD, and BCHR have recorded 370 instances of torture, almost all of which took place at the CID. While no information was provided regarding torture for 121 victims, only two of the 495 complaints specifically state that security forces did not subject the victim to torture during arrest or detainment. These two victims were, however, reportedly subjected to intimidation and harassment: security forces threatened one victim with torture, and verbally abused the other.

The data suggests that the most common method of torture used by Bahraini security forces is beating the detainees with their fists, which occurred in 275 cases. The complaints also included 154 cases of the authorities beating victims with weapons. In addition to direct physical abuse, the security forces reportedly subjected 166 victims to starvation of water and/or food, 145 to deprivation of toilet use, and 130 to forced standing. Furthermore, 98 victims have reported that Bahraini security forces threatened them with further torture during detainment, while 37 victims have reported that security forces threatened to torture or harm their family members. Other common methods of torture used by the security forces included sleep deprivation with 97 cases, deprivation of prayer with 88 cases, sectarian insults with 74 cases, electric shock with 66 cases, genital abuse with 65 cases, sexual abuse with 65 cases, stripping with 61 cases, hanging with 35 cases, and sodomization with 8 cases. Bahraini security forces also reportedly subjected 22 victims to solitary confinement during their detainment, and deprived another 45 of medical treatment (see Figure 1). Notably, the data indicates that many of the victims were subject to a variety of these methods of torture and ill treatment during their arrest or detention. 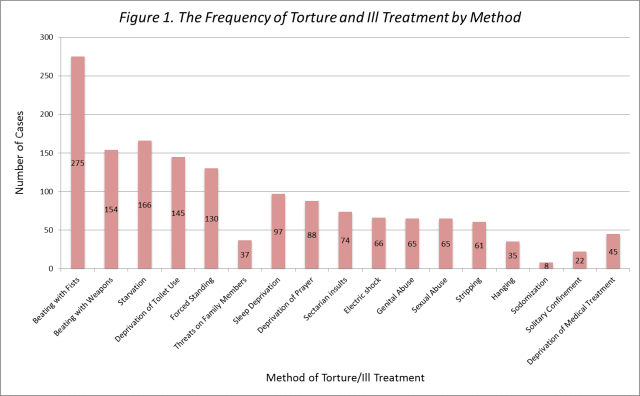 As a direct result of the torture carried out by Bahraini security forces, eight victims have suffered permanent injuries. Government actions have also been responsible for the death of six victims included in the complaint data, as a result of either direct violence or deprivation of medical care.

In at least 122 instances, the methods of torture described above were used to extract false confessions from the victims. Another 23 victims have also reported that their coerced confession was used as the primary evidence for their conviction at trial. In addition, only two victims have reported that they were permitted access to an attorney during their initial investigation, while 116 victims confirmed that they were not allowed access to an attorney at that stage.

Furthermore, ADHRB, BCHR, and BIRD have only received one report of the Bahraini government initiating an investigation into a torture allegation included in a complaint submitted to the Special Procedures. In this case, the accused was eventually dismissed on appeal. Similarly, none of the 495 victims have reported receiving any compensation for their treatment during arrest or detainment.

The complaint database illustrates broader trends in the arrest and detention practices of the Bahraini government. In an effort to silence dissent, the Government of Bahrain consistently employs excessive and violent measures against its own citizens. Specifically, the data indicates that the security forces continue to arbitrarily arrest, detain, torture, and even extra-judicially kill Bahraini citizens.  Moreover, a significant portion of those subjected to these systematic human rights violations have been children.

In light of the evidence gathered from these complaints, it is clear that the Government of Bahrain has engaged in a widespread program of arbitrary arrest and detention. Bahraini security forces, generally from the Ministry of Interior (MOI), commonly arrest victims from private homes without a warrant. Many of these arrests occur in the middle of the night, and they are regularly conducted with excessive force. While unlawfully present in the home, Bahraini security forces frequently conduct in-depth searches and seizures as well.

Compounding the illegality of these arrests, the authorities subject many of the victims to enforced disappearance. In most cases, government forces disappear the victim for several hours to a few weeks, although they have disappeared some victims for more than a month at a time. During disappearance, the victims are typically held incognito at the CID and prohibited from contacting family members regarding their whereabouts.

In addition to the high rates of arbitrary arrest and detention, the data clearly indicates a pattern of state-sanctioned torture. While many arrests have involved physical abuse and ill treatment, those arrested often experience further violence during detention; most allegations pertain to the conduct of Bahraini security forces at the CID. Physical beating, in particular, is widespread and common. Still, Bahraini security forces have implemented a number of different techniques to torture detainees, including such methods as sleep deprivation, temperature manipulation, hanging, electrocution, sexual abuse, and sectarian insults against Shia victims. Accordingly, the detainees often suffer from persistent and lasting effects, some of which result in permanent injury or death.

These complaints also highlight the significant due process violations that occur as a result of the arbitrary arrest and detention of Bahraini citizens. Security forces routinely extract confessions from the victims by way of torture or threat thereof. The government routinely uses these coerced confessions in the victim’s conviction and sentencing. During trial, and even more frequently during the initial investigation period, victims are often denied access to an attorney. Throughout these processes, many of the victims were unaware of the charges against them.

These systemic flaws in the Bahraini criminal justice system are aggravated by mounting evidence that the government specifically targets peaceful protestors, political dissidents, journalists, human rights defenders, and religious leaders. The authorities commonly arbitrarily arrest these individuals and then charge them with offenses such as illegal gathering, inciting hatred against the regime, engaging in terrorist activity, etc.

Through its actions, the Government of Bahrain knowingly and systematically violates its international human rights obligations. Specifically, the Government of Bahrain engages in widespread violation of the International Covenant on Civil and Political Rights (ICCPR), the Convention against Torture and other Cruel, Inhuman or Degrading Treatment or Punishment (CAT), and the Universal Declaration of Human Rights (UDHR).

First and foremost, in carrying out extra-judicial killings, the Government of Bahrain has violated, and continues to violate, the inherent right of all persons to life, liberty, and security as guaranteed by Article 3 of the UDHR. Similarly, Article 6 of the ICCPR expressly prohibits the arbitrary deprivation of life.

Furthermore, the Government of Bahrain has engaged in a systematic and government-sponsored program of arbitrary arrest and detention in violation of international human rights law. Even more problematic is the regularity in which the Government of Bahrain engages in the forced disappearances of those whom it arbitrarily arrests and detains. As stated in Article 9 of the ICCPR and Article 9 of the UDHR, no person shall be subjected to arbitrary arrest, detention, or exile.

By targeting peaceful protestors, political dissidents, journalists, human rights defenders, and religious leaders, the Government of Bahrain is in violation of its international human rights law obligations concerning civil and political rights. In particular, Article 18 of the ICCPR and Article 18 of the UDHR protect the right to freedom of thought, conscience, and religion, which also includes the right to manifest that religion or belief in worship, observance, practice, or teaching. Furthermore, Article 19 of the ICCPR and Article 19 of the UDHR guarantee the right of all persons to hold opinions without interference, as well as the right to freely express that opinion. Similarly, Article 21 and 22 of the ICCPR and Article 20 of the UDHR ensure the right to peaceful assembly and freedom of association. As many of the victims whose complaints were submitted to the Special Procedures were charged with arbitrary crimes, such as illegal gathering and various other crimes of conscience, it is clear that the Government of Bahrain is engaged in the systematic repression of dissent.

Most evident, the Government of Bahrain engages in the systematic violation of the absolute prohibition against the use or threat of use of torture and ill treatment as prescribed by international human rights law. Article 7 of the ICCPR and Article 5 of the UDHR expressly provide, “No one shall be subjected to torture or to cruel, inhuman or degrading treatment or punishment.” Further, Article 10 of the ICCPR requires that “all persons deprived of their liberty shall be treated with humanity and with respect for the inherent dignity of the human person.” In addition, the Government of Bahrain is engaged in a widespread violation of its obligations under the Convention against Torture (CAT). For instance, Article 2 of the CAT requires that States take measures to prevent acts of torture within their territorial jurisdiction, and no exceptional circumstance will justify the derogation from the prohibition on the use of torture. Furthermore, through Articles 4, 7, 13, 14, and 15, the CAT makes clear that States are responsible for criminalizing all acts of torture, for prosecuting and punishing perpetrators of torture, and for providing compensation to victims of torture. Thus, by failing to investigate complaints alleging torture, by not providing a proper means by which victims can file such complaints, by failing to prosecute those who are engaged in acts of torture, and by failing to provide victims with a means of redress and adequate compensation, the Government of Bahrain continues to systematically violate its obligations under the CAT.

Overall, the information provided by the complaint database reveals broad trends in the human rights abuses carried out by the Government of Bahrain against its own citizens. ADHRB, BCHR, and BIRD find that the government is engaged in persistent, violent, and systematic repression, evidenced by widespread allegations of arbitrary arrest, detention, torture, and – in some cases – extra-judicial killing. As the authorities continue to perpetuate such violence with impunity, the human rights situation in Bahrain will likely continue to deteriorate.