On Friday February 12, 2016, Americans for Democracy & Human Rights in Bahrain (ADHRB) held a protest outside the Bahraini Embassy in Washington, D.C. to commemorate the fifth anniversary of the 2011 pro-democracy protests in Bahrain. The protest included a 12-foot inflatable Pearl Roundabout, a monument in Manama that became a symbol for the 2011 mass protests and which Bahraini authorities later demolished. 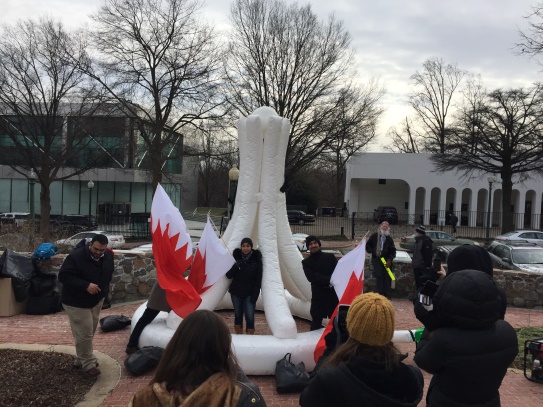 Husain Abdulla, Executive Director of ADHRB, gave the opening speech stating the reason for the protest was “simply to support the people of Bahrain.” Mr. Abdulla went on to state that behind the protests and the images is a human story about all the individuals who rose up and decided to risk government violence to demand justice and self-determination.

Brian Dooley of Human Rights First stated that change is coming to Bahrain and that the dictatorship will soon end.  He specifically highlighted the issue of freedom of assembly and freedom of speech in Bahrain.

Matar Matar, former Bahraini Member of Parliament, gave a speech discussing why he and other politicians joined the original peaceful protests in 2011. He stated the goals of the movement are to establish democracy and human rights in Bahrain. Maryam al-Khawaja of the 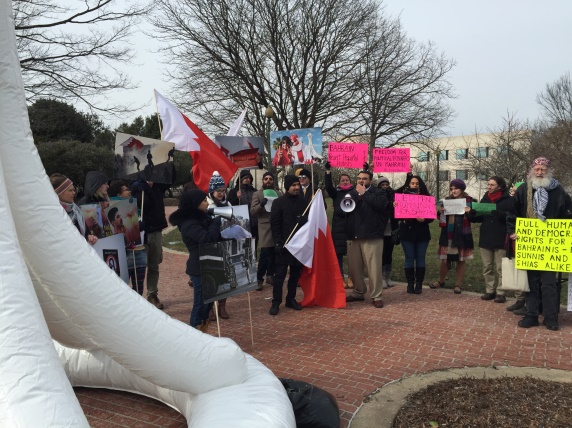 Gulf Center for Human Rights gave the final speech of the protest, commemorating the February 14 uprising and describing her time at the Pearl Roundabout with her family and the feeling and energy that surrounded her in 2011.

Following the speeches, demonstrators led group chants including “1, 2, 3, 4, political prisoners no more, 5, 6, 7, 8, stop the torture, stop the hate.” The speeches and chants were livestreamed on ADHRB’s twitter feed, and will be featured on its website. Individuals who attended the protest included local Bahraini-Americans who spoke out against the crimes committed by the Bahraini government. They all demanded justice for those who had died during the protests as well as those who continue to suffer persecution by the Bahraini government. Individuals also stood in front of the roundabout and called for the release of all political prisoners in Bahrain, including the members of the Bahrain 13. Maryam al-Khawaja concluded the protest by leading a march in front of the embassy and calling for an end to torture, for the release of all political prisoners, and for democracy in Bahrain. 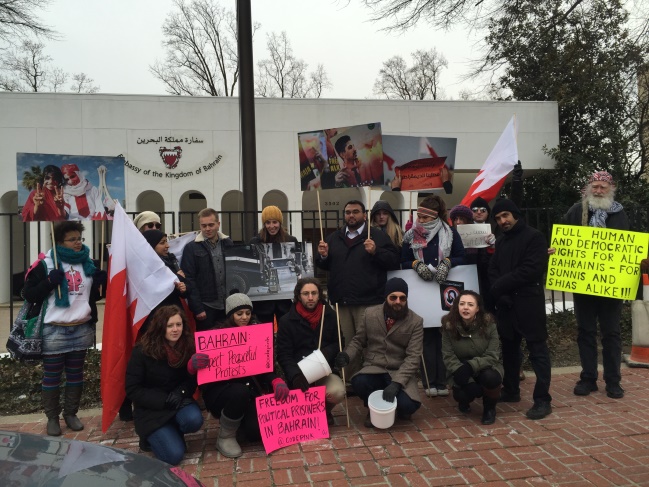