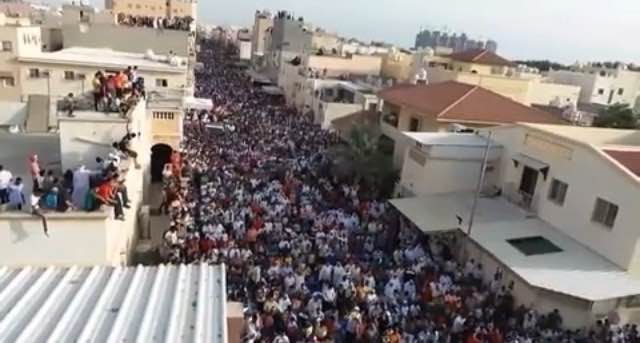 In solidarity with the people of Bahrain

Washington, DC– On Thursday June 30th at 1:00 PM, activists and human rights defenders will gather to protest against the rapid escalation of violations against civil society by the Government of Bahrain. We will gather to call on the Government of Bahrain to stop targeting civil society and work towards political reform and reconciliation in order to guarantee human rights for all in Bahrain.

In the past few weeks, Bahrain has witnessed unrelenting deterioration, the extent of which has been unseen since 2011. On 30 May, the Government of Bahrain increased the sentence of Sheikh Ali Salman, the Secretary-General of al-Wefaq, from four to nine years on appeal. Further, human rights activist Zainab al-Khawaja was forced into exile. On 12 June, the Government of Bahrain imposed travel bans on at least 10 human rights activists and family members of victims of abuse, thereby preventing them from engaging with the international community. On 13 June, the government re-arrested Nabeel Rajab, the President of the Bahrain Center for Human Rights, on charges relating to his free expression. On 14 June, the Ministry of Justice suspended Al-Wefaq, the largest opposition party in Bahrain. Over the past week, the government has targeted with intimidation almost a dozen of the country’s top Shia clerics, calling them in for questioning.

On 20 June 2016, the Government of Bahrain revoked the citizenship of Sheikh Isa Qassim, Bahrain’s most prominent Shia cleric. Within an hour of the news of Sheikh Isa’s denaturalization, thousands of people appeared on the streets surrounding his home in Diraz. This is the greatest number of people we have seen gathered in protest in Bahrain since 2011. One week later, the sit-ins continue in Diraz as the government has set up roadblocks around the town. Witnesses have reported an increased presence of Bahraini security forces.

“Revoking Sheikh Isa Qassim’s nationality is an unprecedented low for the dictators in Bahrain’s government,” said Husain Abdulla, Executive Director of Americans for Democracy & Human Rights in Bahrain (ADHRB). “After Bahrain’s foreign minister insulted the UN High Commissioner for Human Rights for his condemnation of citizenship revocation l ast week, the oppressive government showed that they no longer have any regard for any international human rights standards, and are prepared to silence their critics by any means available.”

For additional information, please contact Americans for Democracy & Human Rights in Bahrain (ADHRB) at media@adhrb.org or (202) 621-6141.