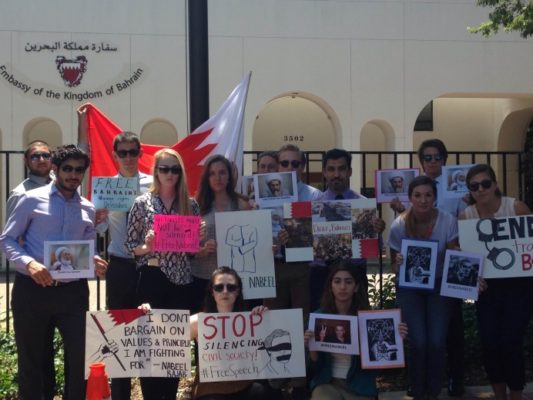 On Thursday 30 June 2016, Americans for Democracy & Human Rights in Bahrain (ADHRB) held a protest outside the Bahraini Embassy in Washington, D.C. to bring awareness to the campaign of repression against civil society by the Government of Bahrain.  The protest included signs calling attention to use of travel bans, the re-arrest and imprisonment of Nabeel Rajab, the citizenship revocation of Sheikh Isa Qassim, and the government’s actions to stifle civil society. 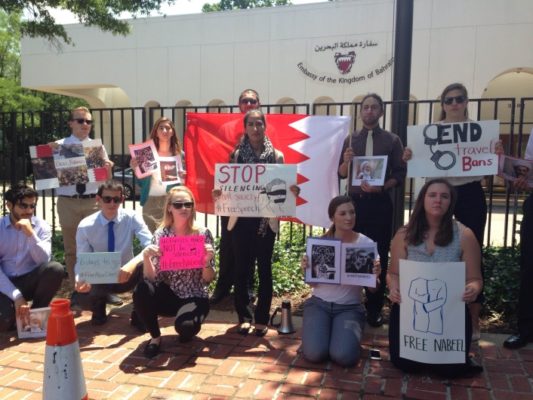 The Rally included speeches from participants highlighting the escalation of repression by the Government of Bahrain. Events mentioned during the protest include the increased sentencing of Sheikh Ali Salman, the Secretary-General of al-Wefaq, and the implementation of travel bans by the Bahraini government on at least 10 human rights activists and family members of victims of abuse, preventing them from participating in the 32nd session of the UN Human Rights Council (HRC). Speeches also called attention to the repeated targeting of Nabeel Rajab, as the government had rearrested him on charges relating to his freedom of expression. Protesters expressed their disapproval of the ongoing efforts to silence Bahraini civil society as the government suspended Al-Wefaq, the largest opposition party in Bahrain.

The protest included speeches and comments on the ongoing sit-in in Diraz following the government’s citizenship revocation of Sheikh Isa Qassim, Bahrain’s most prominent Shia cleric. The demonstrations in Diraz involve the greatest number of people seen gathered in protest in Bahrain since 2011. 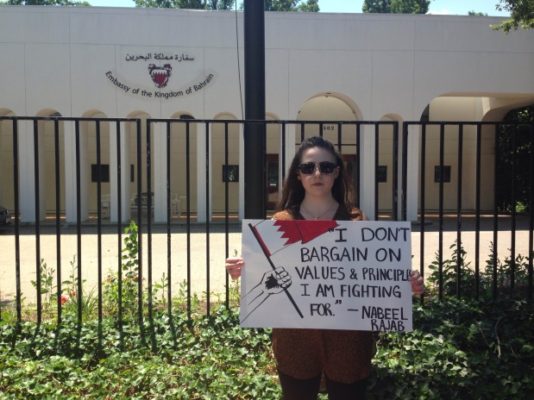 Following the speeches, demonstrators led group chants including “1, 2, 3, 4, political prisoners no more, 5, 6, 7, 8, stop the torture, stop the hate.” The speeches and chants were live-tweeted on ADHRB’s twitter feed. Individuals all called for an end to the human rights violations committed by the Government of Bahrain and demanded justice for all who continue to suffer persecution by the Bahraini government.