14 July 2016 – The Government of Bahrain is targeting public sector employees found in photos and videos of sit-ins with arrest and further punishment. We, the undersigned NGOs, condemn the return of this practice, which violates people’s right to assembly.

On 12 July 2016, Ali Abdulraheem, an official at the state Labour Market Regulatory Authority (LMRA), was summoned for interrogation at the Public Prosecution for participating at the open-ended sit-in in Diraz. Abdulraheem was subsequently arrested and remanded to 15 days in detention. The arrest of Abdulraheem comes after his photo was circulated through pro-government social media channels and groups calling for his arrest. In addition, a parliament member incited against him and demanded his arrest. He then congratulated his followers shortly after Abdulraheem’s arrest. 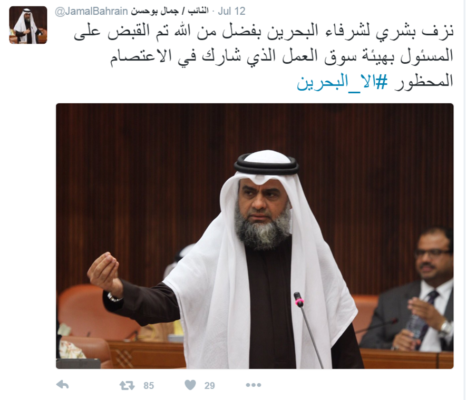 “PM Jamal Abuhasan: Good news to Bahrain’s loyalists. With Grace of God, the official in LMRA, who participated in the unlawful sit-in, was arrested. #Bahrain” 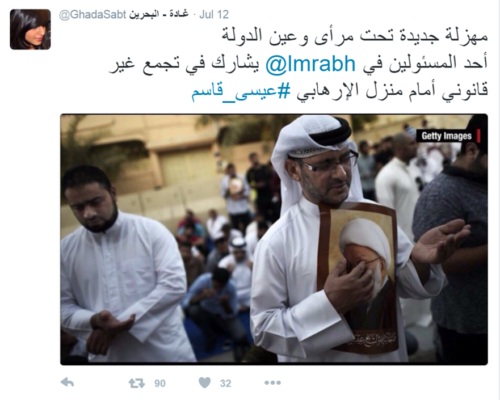 “A new joke under the sight of the government. An official in @lmrabh participate in an illegal gathering in front of the house of the terrorist #Isa_Qasim”

Since 20 June 2016, thousands of citizens have been gathering at a peaceful sit-in in Diraz around the house of Shia spiritual leader Sheikh Isa Qassim, whose citizenship was revoked that day. After the sit-in began, many pro-government social media accounts have started to call for individuals to publish the photos of the protesters so they can be identified and consequently punished, including imprisonment, cutting their government services such as housing, and suspending them from their jobs, among other penalties. Reminiscent of the mass and widespread “witch hunt” of 2011, several Twitter handlers, some with thousands of followers, have started identifying protesters, publishing their photos, and calling them traitors.

“Brothers/ Sister, please provide us with photos of individuals (protesters) in Diraz? We will expose those traitors, whether they’re businessmen or employees! Their punishment will be harsh. #Bahrain”

“Whoever violates the country’s laws and stages sectarian protests must be punished and deprived of his privileges! Starting with housing, scholarships, and governmental jobs.” 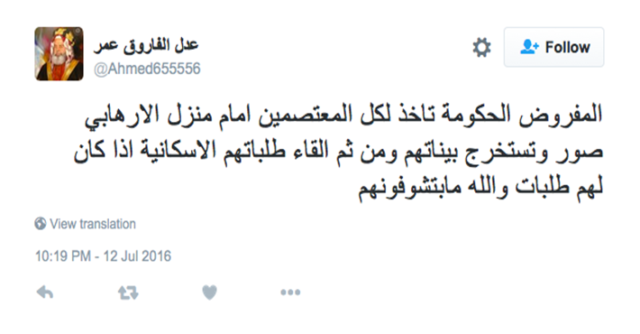 “The government should take photos of all the protesters [participating in the sit-in] in front of the house of the terrorist, get their details, and then cancel their housing requests, if they have any.” 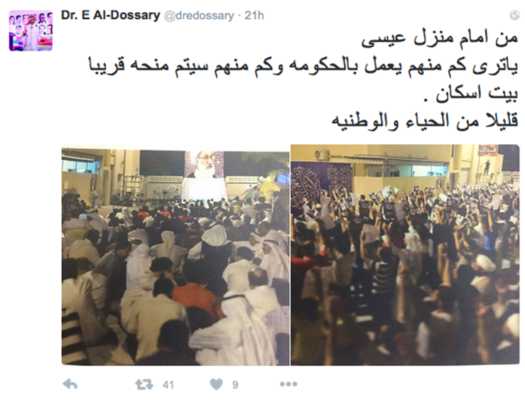 “From the house of Isa. I wonder how many [of the protesters] work for the government, and how many will be granted a house [by the government] soon. Have shame and patriotism.”

In 2011, a similar “witch hunt” practice was observed and documented by the BICI, which concluded in paragraph 1637 of its report that some twitter accounts have targeted anti-government protesters, disclosed their whereabouts and personal details, and openly harassed, threatened and defamed certain individuals. Many of those individuals were later arrested and tortured by the government. The BICI has considered such online harassment to be in violation of the right to privacy while amounting to hate speech and incitement to violence. However, since 2011, no one who has participated in these campaigns has faced any consequences.

We consider the government’s arrest and prosecution of Ali Abdulraheem and any other citizen for merely participating in a peaceful protest as a violation of the right to freedom of expression and assembly. We additionally express our grave concern over the mass targeting of peaceful protesters at the sit-in.

We, the undersigned, call on the Government of Bahrain to respect the rights to freedom of expression and assembly, immediately release Ali Abdeulraheem and all individuals arrested for merely practicing these rights, and to end the electronic hate campaign that is clearly intended to silence dissent and which is supported by the authorities without consequence.