On 30 July 2016, the Bahrain News Agency (BNA), the state news agency of Bahrain, released a statement on behalf of The Labour and Social Development Ministry regarding the activities of its National Child Committee. BNA noted that the Ministry and 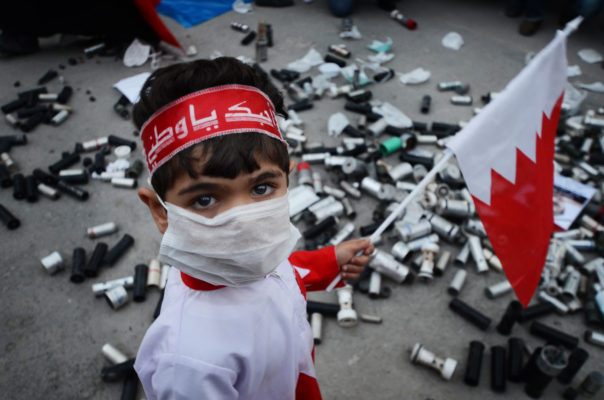 the Committee will convene to submit a 2017 report to the United Nations Committee on the Rights of the Child to highlight the kingdom’s “numerous and advanced” achievements in the field of child rights. The statement also contests local newspaper reports regarding Bahrain’s regression in upholding international standards of children’s rights, alleging that the newspapers received inaccurate information from unknown organizations.

The claims made in this recent press release are unsupported by fact. Americans for Democracy & Human Rights in Bahrain (ADHRB) has been documenting Bahraini authorities oppression and abuse
of children since 2011.

Bahraini law defines a minor as any individual who is under the age of 15. The law also states that Bahraini minors “cannot be held responsible for the commission of an act constituting an offence.” Despite these supposed legal protections, the government routinely subjects children to actions that contradict the international Convention on the Rights of the Child, which Bahrain ratified in 1992.

Since the 2011 Pearl Roundabout protests, government oppression and violence against Bahraini children has grown. During the 2011 protests, Bahraini police were responsible for the deaths of 7 minors and 18 adolescents under the age of 18. The youngest casualty was a 5 day old infant named Sajida Faisal Jawad, who was Bahraini authorities killed when they fired tear-gas into her home after her father, a military member, refused to engage in the violent crackdown against protesters.

Bahraini security forces arrested child protestors in the anti-government uprisings and subjected them to the same violent control methods as adults.  When the 2011 Bahrain Independent Commission of Inquiry (BICI) investigated the country’s prisons, they discovered “a number of children” under the age of 15, who authorities blindfolded and handcuffed for throwing small stones at police cars, despite the children causing only minor damage to the cars. Minors have also been repeatedly charged with criminal offenses under Bahrain’s broad Anti-Terror Law and sent to jail. Imprisoned children in Bahrain are without adequate education or healthcare, and they face varying amounts of physical and psychological torture while in detention.

Government officials and government-run media have consistently failed to criticize the torture and detention of children, demonstrating the lack of accountability held by Bahraini authorities. International outrage ensued when Bahraini police arrested Zainab al-Khawaja, a human rights activist, with her 1-year-old son, Abdulhadi. Officers detained them both in Isa Town Women’s Prison for approximately three months. Authorities repeatedly denied requests by al-Khawaja’s family to release Abdulhadi, even when his mother fell ill in the prison. The baby was exposed to extremely unsanitary and hazardous conditions in the Isa Town prison throughout his stay there, including ant-infested cells and close proximity to prisoners infected with hepatitis C.

The Bahraini state media’s declarations that children are protected by the State are baseless, as exemplified by officials’ consistent violence against children and adolescents. This is one of many examples of BNA concealing the Kingdom of Bahrain’s human rights violations. It is clear that the Kingdom is unwilling to allow State media to acknowledge cases of illegal death, torture, and arrest of minors, or the systematic infringement upon their rights. ADHRB not only disputes the assertions made by the BNA and the government concerning children’s rights in the nation, but also condemns the whitewashing of Bahrain’s crimes against its children.

Farah Kader is an Advocacy Fellow for ADHRB.