On 26 June 2016, Bahraini security forces stormed Taiba Ismail’s house and arrested her. The Government of Bahrain has since charged Ismail for tweets she posted, saying that she “incited hatred against the government.” Ismail’s arrest came at the height of the government’s renewed campaign of judicial harassment against opposition leaders, political activists, and human rights defenders on charges violating their internationally-sanctioned rights to freedom of expression.

Bahraini courts postponed Ismail’s trial numerous times, subjecting her to more than three months in detention. The mother of two stated that just “140 letters have made (my) children without the care and nursery of their mother.” Both of Ismail’s children were under the age of two at the time of her arrest. On 31 August, Bahraini authorities sentenced Ismail to one year in prison in addition to a $1,000 fine on the charge of offending the king, “misusing social media to post calls of incitement,” and undermining Bahrain’s security and stability. Bahrain’s public prosecutor has so far refused to release the tweets, which they cite as the reason for her arrest. 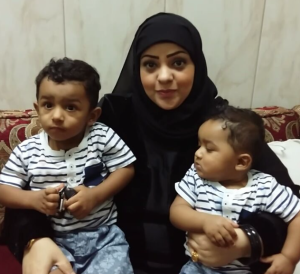 On 19 October 2016, the High Criminal Court reviewed Ismail’s initial charges, and judges upheld her one-year sentence. Bahraini authorities detained her for almost four months leading up to her final verdict. Her family was able to visit her 17 October at Isa Town Women’s Prison.

The Government of Bahrain continues violate the International Covenant on Civil and Political Rights (ICCPR), a treaty to which it acceded to in 2006. Bahraini authorities repeatedly contravene the ICCPR by conducting arbitrary arrests of peaceful human rights activists, journalists, and opposition leaders. Under Article 19 of the ICCPR, “everyone shall have the right to freedom of expression; this right includes freedom to hold opinions without interference and to seek, receive and impart information and ideas through any media and regardless of frontiers.” Additionally, Bahraini authorities have consistently violated the Universal Declaration of Human Rights (UDHR), which calls for individuals’ rights to free expression. Ismail’s arrest for peaceful dissent is a clear violation of the international human rights standards outlined in the ICCPR and the UDHR. The Government of Bahrain should immediately release and drop all charges against Taiba Ismail and all other prisoners of conscience who have been arbitrarily detained for peacefully exercising their rights to freedom of expression.