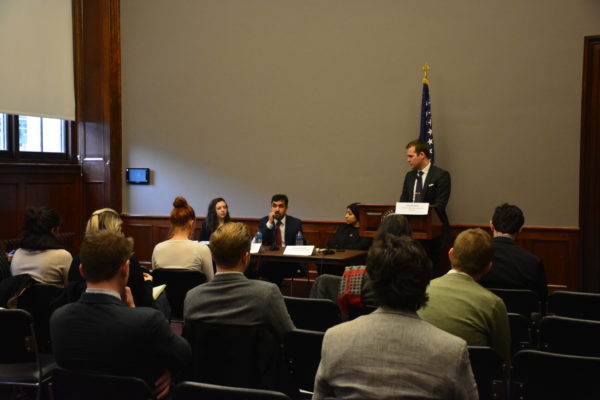 On 14 February 2017, the sixth anniversary of Bahrain’s pro-democracy uprising, Americans for Democracy & Human Rights in Bahrain (ADHRB) and the Office of Senator Ron Wyden (D-OR) hosted a panel at the Russell US Senate Office Building entitled “Recommendations for reform: How can the US diminish destabilization in Bahrain?” Panelists included Maryam al-Khawaja, Bahraini human rights defender and Advocacy Advisor with the Gulf Center for Human Rights (GCHR); Matar Ebrahim Matar, former Bahraini Member of Parliament; and Erin Sigmon, Advocacy Associate at ADHRB. The event was moderated by Cole Bockenfeld, Deputy Director for Policy at the Project on Middle East Democracy (POMED). 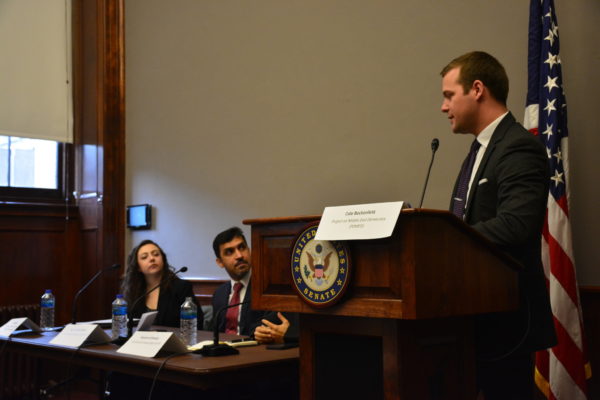 Bockenfeld began the event by introducing the panelists and contextualizing Bahrain’s 2011 pro-democracy protests, reminding the audience that – while the country’s uprising was certainly part of the broader Arab Spring movement – the underlying causes were local and longstanding, including economic, social, and political grievances. He noted that, unfortunately, the intervening years have seen a deterioration in the human rights situation in Bahrain, culminating this past year in a significant deviation away from any progress that had been made toward post-2011 reform commitments. 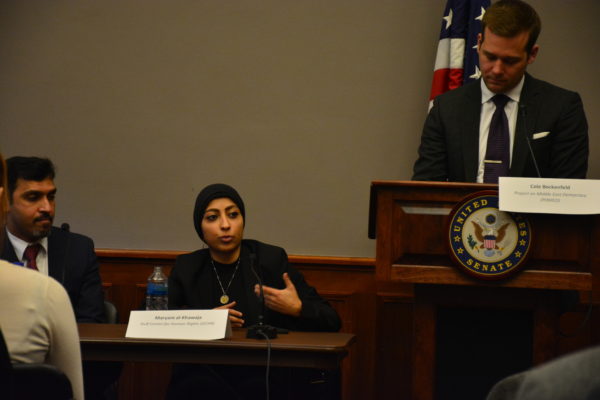 Maryam al-Khawaja focused her remarks on the situation in the ground in Bahrain six years on from the pro-democracy protests in 2011. There is a great degree of anger and frustration among many Bahraini’s today, she explained, particularly in light of the country’s 15 January execution of three torture victims. However, whereas the government’s reaction in 2011 was largely a ‘knee-jerk’ and messy one, Bahraini authorities in the years since have institutionalized their crackdown on dissent. The Government of Bahrain has in particular used the judicial system as a tool for this institutionalized repression. Indeed, prison sentences for activists and anti-government voices have significantly increased in length in recent years: whereas sentences were once around the five-year range, it is now common to see prison terms handed down of ten years or more. This has contributed to an environment in which there is essentially no civic space left in Bahrain, and wherein human rights defenders are in large part imprisoned, under surveillance, or in exile. The Bahraini government has also backtracked on the relatively minimal progress toward instituting the Bahrain Independent Commission of Inquiry (BICI) reforms since accepting all 26 recommendations in 2011. Most recently, Bahrain restored by decree the arrest power of the National Security Agency (NSA), which oversaw the torture of protesters in 2011. Ms. al-Khawaja explained that the NSA is also increasingly returning to its methodologies of the past in other ways. More and more, for example, Bahraini authorities are conducting early-morning raids carried out by plainclothes police officers. A new bill in the Bahraini parliament that would allow civilians to be tried in military courts again harkens back to the days of the 2011 protests and their aftermath.

In wrapping up her comments, Ms. al-Khawaja encouraged the audience to look at the case of Bahrain within the context of the regional security situation as a whole. The worse the security situation is in any given Gulf State, she said, the more repressive they become. Given this pattern, human rights activists must endeavor to convince states like Bahrain that repression will not lead to internal security and stability. Rather, the only path towards ensuring stability is through the facilitation of a safe space for civil society and through a guarantee to protect human rights. Later, in the question-and-answer portion of the discussion, Ms. al-Khawaja also focused on the problem represented by the international community’s failure to hold the Bahraini government to account over its human rights abuses. With no real price to be paid, there exists little incentive for Bahraini authorities to change their behavior. She warned that this situation may worsen given that much of the international community remains focused on the goings-on in the Trump White House. 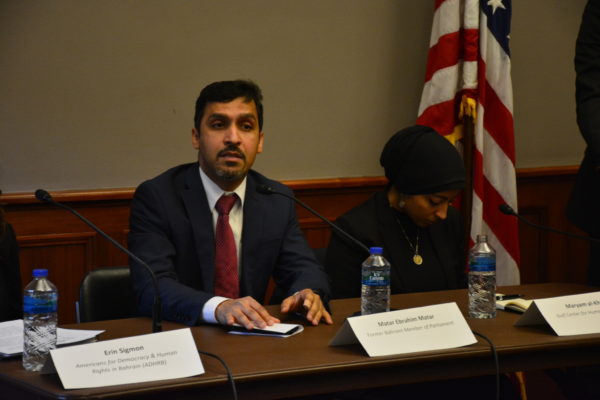 Matar Matar, a former member of parliament for the now-dissolved Al-Wefaq National Islamic Society who was arrested and tortured in 2011, described the government’s repression of the pro-democracy movement leading up to the Arab Spring protests. He specifically contextualized pre-2011 efforts at coalition-building amongst the opposition and pro-reform groups within the fight against corruption. Self-enrichment – and the protection of system that accomplishes this – is one of the driving factors of the ruling family’s repression, in his view, and therefore its harsh response to the uprising was not unexpected. He explained that, after years of sporadic attempts at dialogue after 2011, the government has recently intensified its suppression of the Shia leadership, Al-Wefaq, and other opposition groups. It imprisoned Al-Wefaq’s Secretary-General, Sheikh Ali Salman, closed the society altogether, and targeted the country’s most prominent Shia leader, Sheikh Isa Qassim, despite his informal links to Al-Wefaq and his decision to stay quiet on political matters over the last several years. More recently, the government has either harassed or ignored Sayed Abdullah al-Ghuraifi, perhaps Bahrain’s most senior Shia cleric beside Sheikh Isa Qassim and one who has been urging a return to peaceful dialogue. Mr. Matar asked why the government would decide to silence all of the prominent leaders calling explicitly for reconciliation, reform, and moderation such as Sheikh Ali Salman, Sheikh Isa Qassim, and Sayed Abdullah al-Ghuraifi. He argued that the answer to this question is that the government does not seem to be pursuing reconciliation; rather, it is using increased repression and sectarianism to distract from or justify a corrupt, kleptocratic system. He said it appears that the ultimate goal of the ruling family is to control and exploit the country’s wealth no matter the outcome for its people, so it has created a state structure that generates sectarian conflict where it had been negligible before. The international community must understand that the human rights environment will not change without first addressing this core problem of government corruption at the expense of fair distribution and welfare for all Bahrainis, regardless of sect. 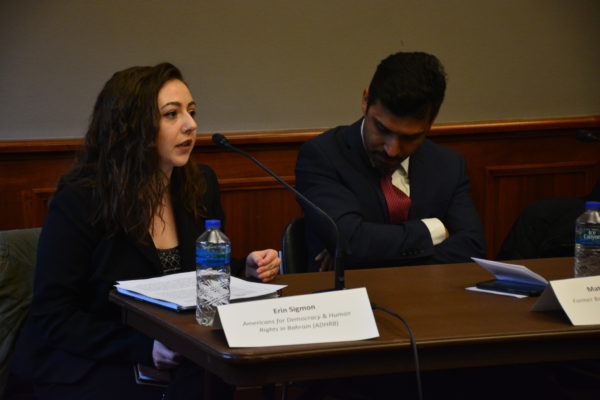 Erin Sigmon, Advocacy Associate at ADHRB, focused her comments on the relationship between the United States and Bahrain, and specifically on what the US can do to push for human rights reform. America has strong security ties with Bahrain: the US has made Bahrain a major non-NATO ally and the US Navy’s 5th fleet is stationed in country. This, combined with the US’ unique position as one of the world’s most powerful countries, also entails a duty to the people of Bahrain to ensure that the remains peaceful and stable. US lawmakers have, in the past, taken steps to try and fulfill that duty. As Ms. Sigmon explained, a bipartisan group of Representatives and Senators in 2015 introduced legislation in both houses of Congress that would have blocked the sale of certain weapons to Bahrain until the Department of State was able to certify that the Bahraini government had implemented all 26 recommendations of the BICI. While these bills did not become law, Ms. Sigmon reminded the audience that the introduction of such measures is impactful in and of itself, in particular because it shows that there are members of the US government who value human rights and care about the situation in Bahrain. Moreover, such efforts put pressure on Manama to change course before stronger actions are taken in Washington. In concluding her remarks, Ms. Sigmon encouraged current Members of Congress to re-introduce and support the bill tying arms sales to BICI reforms, and to send a message to the Trump administration that it cannot support Bahrain until the Bahraini government makes a clear commitment to respecting and protecting human rights. 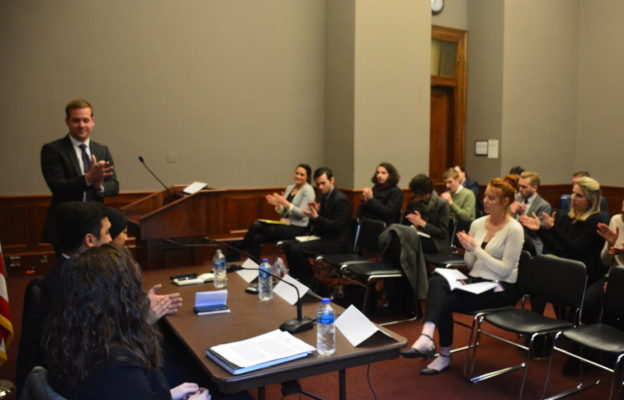