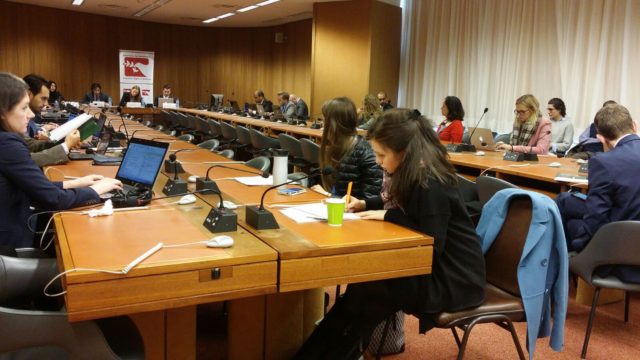 Amanda Milani, UN Liason for Americans for Democracy & Human Rights in Bahrain (ADHRB), moderated the panel and began the event by introducing the topic of discussion: religious and cultural rights in Saudi Arabia. She noted that it would be remiss if she failed to address that there were no Saudi nationals on this important panel, but she stressed that this reality illustrates the severity of the restrictions imposed on civil society in the kingdom. Due to a variety of repressive measures, Saudi activists – like Samar Badawi – are often prevented from leaving the country to engage in international fora, or even to organize domestically. Because of this, the panel also presents videos and remarks from exiled Saudi activists that could not attend the UN Human Rights Council in person. 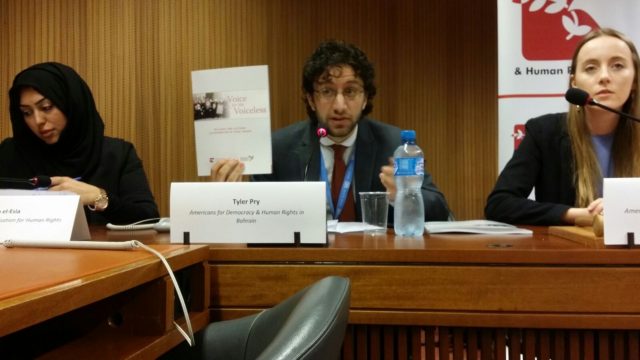 Pry argued that the state does not perceive Shia Muslims as Muslims, and in this way it includes them among other non-Muslim minorities in the country, which it also discriminates against with great intensity. In a country where a particular form of Islam – Wahhabism – is the state religion, then the state itself is biased against individuals that are not considered Muslims, no matter their history in the country.

The country’s religious establishment does not include any representatives of the Shia community or other religious groups. The influence on law and state practices that emanate from this establishment filter throughout all facets of the system. From the media, to the schools, to business – anti-Shia and anti-non-Muslim bias permeates. If these people are not explicitly dehumanized, per se, there is certainly a permissive atmosphere of violence and prejudice.

Finally, he noted that you see these extreme forms of discrimination and structural violence most clearly in the state’s reaction to protests or demonstrations in the Eastern Province, a predominantly Shia region. These areas saw violent repression, excessive force, arbitrary detention, and other severe human rights violations, culminating in the execution of Sheikh Nimr al-Nimr, a leading religious leader and reform activist. 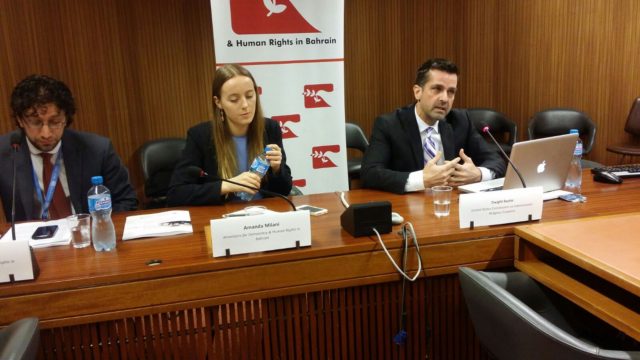 Dwight Bashir, Director of Research & Policy at the United State Commission on International Religious Freedom (USCIRF), began by explaining USCIRF’s role as an independent advisory body for the US government on how to protect religious freedom based on international human rights law. He elaborated on the core protections and values that frame USCIRF’s work.

Bashir then emphasized that, in Saudi Arabia, it is just not possible to freely express your faith in public or in private. The state makes a clear assertion that the Saudi government’s interpretation of Sunni Islam is the only religion that may be practiced in public space on the peninsula. The government simply refers to this as ‘Islam’ – it makes no distinction. Shia and non-Muslims are relegated to private spaces for the practice of faith, and the regulations that protect this are extremely vague.

There is no formal constitution in Saudi Arabia – it is the Quran. There is also no penal code, although the government claims it is about to fully codify a set of such laws. Until that time however, justice is enacted typically by the arbitrary interpretation of Sharia by individual judges, with harsh sentences handed down for apostasy, blasphemy, and other vague offenses.

Things are not static in Saudi Arabia, however, Bashir argued. Jeddah and other cities and regions have been evolving. The role of state institutions are changing and diminishing in some areas. The ‘religious police,’ the Commission to Promote Virtue and Prevent Vice (CPVPV), has had its “wings clipped quite a bit” by the government, and it can no longer enforce religious mores with as much autonomy. Members can be prosecuted for overstepping. Particularly, the Saudi Vision 2030 plan to revolutionize the economy will have drastic effects here, though there are already tensions with the religious establishment. As for counter-extremism efforts, there has also been some progress. The government has rescinded some hate speech from state materials and has begun retraining programs for official clerics that espouse extremist ideology. Some have even been dismissed. It is yet unclear how effective these programs have truly been, however. Moreover, for some 15 years the government has been attempting to remove extremist and overt violent incitement from educational materials. They have revised books through grade 10, as of now, and are still working on grade 11 and 12, according to Saudi officials. However, the books continue to contain derogations, such as language that refers to “Jews as monkeys” and that has more subtle incitement against “non-believers” and those who “do not follow the right path.” The Saudi government has also created a center to combat extremist communications emerging from ISIS and other militant groups.

Bashir additionally emphasized that women have begun to take larger roles in society, which was not seen years ago. There are now female lawyers and women creating online applications to help women independently navigate the judicial system. Nevertheless, women cannot drive and the guardianship system continues to severely inhibit the right of women to assembly, association, etc.

In Qatif and al-Ahsa, where there is a majority Shia community, there have been public Ashura demonstrations and other public assertions of Shia identity. But, since the execution of Sheikh Nimr al-Nimr, much of the public calls for rights have receded due to the heavy-handed crackdown.

Finally, Bashir highlighted the 10 million expatriate workers in Saudi Arabia and the restrictions on belief that they have faced. But, there have been some nominal improvements here as well, especially with the curtailing of CPVPV authority. Still, expatriates often practice their beliefs in fear that their gathering will be raided or attacked by Saudi authorities.

Some of the cases that USCIRF has been following closely in the sphere of religious and cultural rights are Raif Badawi, as well as his lawyer, Waleed Abu Alkhair. Similarly, Ashraf Fayadh, a poet, was sentenced to death for apostasy in Saudi Arabia. USCIRF hopes that the judicial system will be codified so that lawyers can better address these cases. 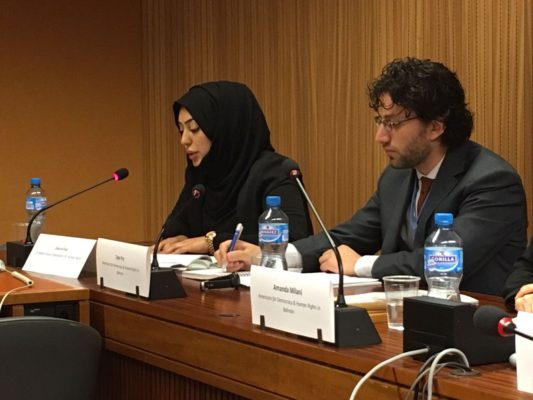 Zena al-Esia, Human Rights Research Associate, argued that there has been a major shift in Saudi Arabia’s positions on religious freedom internationally versus locally. The kingdom’s new religious dialogue center in Austria expresses serious commitments to religious freedom abroad, but at home “alienation, stigmatization, and marginalization” are the staples of the government’s approach. The state superimposes Wahhabi principles upon all of society, exacerbating divisions.

Al-Esia notes that, while the CPVPV has been stripped of some power, as Bashir indicated, their power was transferred to the state police. This has consolidated state power and not necessarily addressed the negative effects of the CPVPV.

Saudi Arabia’s courts criminalize religious freedom. In 2015, the courts sentenced Mikhlif al-Shammari to prison for “sitting with Shia.” In another case, a Shia man was sentenced to prison and lashes for leading a religious gathering. The Specialized Criminal Court, a terrorism tribunal, has criminalized atheism – equating religious freedom issues with national security. In a large “espionage” trial, 15 or so defendants were sentenced to death, partially for trying to create a Shia mosque. Sheikh Nimr has long protested these issues and even petitioned the government – he has since been executed. Al-Esia raised numerous other cases of violations, such as a ban on celebrating birthdays and other such events in hospitals, after a Christian family observed Christmas at a healthcare facility.

Ideologically, the government has used religion as a means of sanctifying state interests and as a means of social control. The religious establishment has issued fatwas that are extremely sectarian: they have prohibited cross-sectarian marriage; analyzed the permissibility of killing Shia; and banned the accepting of food from Shia individuals. The media has been allowed to refer to Shia with derogatory language and incite violence. When one minister tried to shut down an inflammatory television network after a terror attack on a Shia religious center, he was relieved of his duty by the government.

After there were a series of terror attacks in the Eastern Province, local communities called for a law criminalizing sectarian incitement to be proposed by the Shura Council, but it was flatly rejected. The governor of the Eastern Province has also repeatedly described the Shia in his region in hostile and derogatory language.

Al-Esia concluded that the Saudi state must match its international rhetoric on religious freedom with action and reform at home. 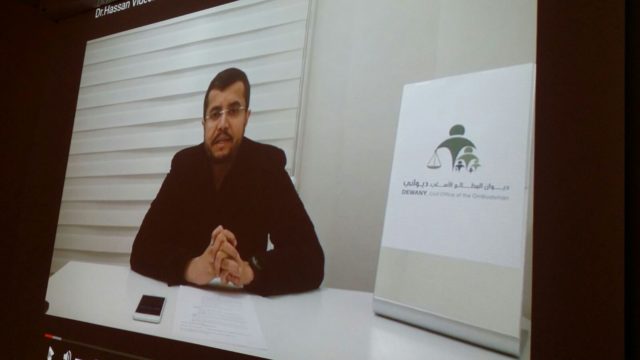 Ali Adubisi, Director of European-Saudi Organization for Human Rights (ESOHR), translated and summarized the remarks of Hassan al-Amri, President of Dewany, which were presented by video. The government’s imposition of Wahhabism on society has motivated or characterized the destruction of key cultural and religious sites in Mecca and elsewhere. In many ways, the Saudi government has attempted to target any manifestations of history that predates the Saudi monarchy. The Saudi state was founded by force, and it has continued to forcefully erase signs of this previous history. Economic modernization and urban development projects in Mecca and Medina have also driven extensive cultural demolition. In the last 20 years, the government has destroyed 1000s of years worth of history, not only in the kingdom but also in Yemen. Notably, the government has not registered Mecca or Medina with UNESCO, but they have registered sites associated specifically with the Saudi royal family.

In response to the Canadian representative during the Q&A, Bashir stressed the importance of international pressure – both states and civil society organizations – in effecting change in Saudi Arabia, and he said the government has recognized opportunities for change, which it is open to. 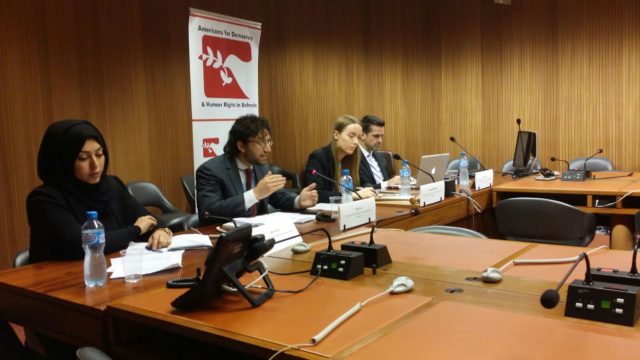 The Austrian representative asked if, as Pry mentioned, the glass ceilings in the country can be shattered and, if so, by whom – clergy, business people, activists? Pry proposed that corporations and companies with an international composition could have a positive impact on pushing back against societal stigmatization of certain groups. Saudi Aramco, for example, has taken some steps in this regard. As far as the role of the clergy, Pry suggested that they would not likely move any quicker than the government – more likely, they will be a force of obstruction for such progress.

Sam Jones of ADHRB asked about the net impact of the Vision 2030 plans: will it ultimately be positive or negative for widening civil society space and the fora for free expression and belief? Or will it be a double-edged sword, in the same vein as the ‘social media revolution’? Bashir and Pry offered cautiously optimistic predictions, noting means of incorporating different sectors of society into the workforce (women, Shia Saudis) as well as the greater opening towards entertainment industries.

Milani asked al-Esia to discuss the overall effect of the execution of Sheikh Nimr on the Shia community and the pro-democracy movement. Al-Esia emphasized that this had in fact had a chilling effect, as Bashir indicated, and we have seen the suppression of the local movement take root rather effectively. The geopolitical tensions between Saudi Arabia and Iran also intensified as a result of this move, which was interpreted by some to be a direct message to Iran. 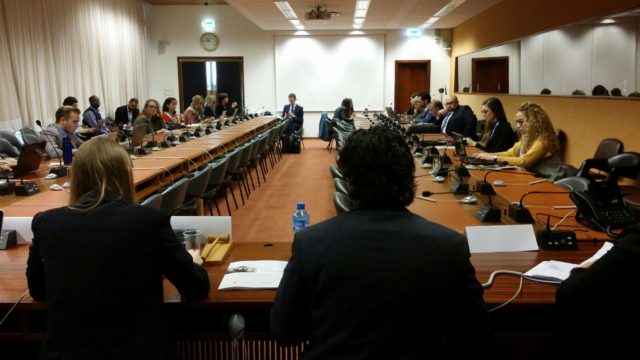