Below you will find the second installment of Americans for Democracy & Human Rights in Bahrain (ADHRB)’s assessments of claims made in the Bahraini government’s National Report to the United Nations (UN) Universal Periodic Review (UPR) Working Group. Assessments contain excerpted information from the full UPR assessment issued by ADHRB, the Bahrain Center for Human Rights (BCHR), and the Bahrain Institute for Rights and Democracy (BIRD), as well as additional or new information, where relevant.

Brief Assessment: Although the government established the Bahrain National Institute for Human Rights (NIHR) in 2009, it has failed to bring it into full compliance with the Paris Principles, a set of international guidelines for national human rights institutions. The NIHR is not sufficiently independent, it lacks adequate investigatory powers, and it has ultimately had little positive effect on the country’s human rights situation. At worst, the NIHR has even endorsed government action that is in clear violation of international human rights standards, such as the January 2017 execution of three detainees tortured into providing false confessions. For more information, see Section G on the NIHR in our full UPR assessment, Bahrain’s Third Cycle UPR: A Record of Repression, as well as our report on Bahrain’s oversight mechanisms, Subservient and Unaccountable: A Shadow Report on the Ministry of Interior’s Ombudsman and the Bahrain National Institute for Human Rights. 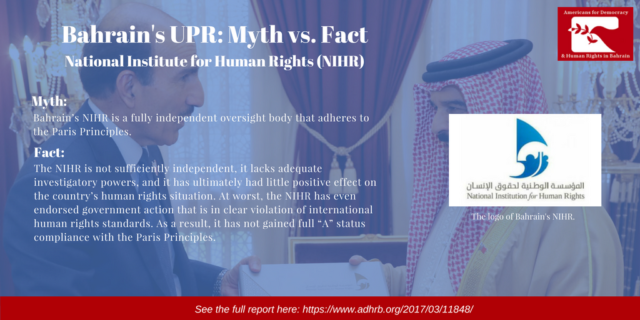 Brief Assessment: The government’s claim to have implemented all Bahrain Independent Commission of Inquiry (BICI) recommendations is false. When Bahraini officials first made this announcement, state media quoted Professor Cherif Bassiouni, chairman of the BICI, as evidence of the government’s progress. However, on 10 May 2016, Professor Bassiouni stated that the Bahrain News Agency had wrongfully cited him, asserting that the Bahraini government had only made progress on ten of the 26 recommendations, and had failed to address “priority” reforms such as those pertaining to accountability and prisoners of conscience.

The chairman’s assessment is the most generous evaluation outside of those released by the Bahraini government. In 2012, a year after the BICI report was released, the Project on Middle East Democracy (POMED) found that the government had fully implemented just three of the recommendations. Moreover, it concluded that no meaningful progress had been made toward six of the most important recommendations, including proposals to increase accountability for officials responsible for torture and severe human rights violations; release political prisoners; prevent sectarian incitement; and relax censorship and controls on free expression.

Human Rights First (HRF) additionally noted in May 2016 that, since the release of the BICI report, no senior government figure has been held accountable for the arrests or deaths in custody; key political leaders remain in jail; and the authorities have continued to deny basic rights including freedom of association, assembly, and expression – all issues meant to be addressed by the BICI recommendations.

The US Department of State released their own report similarly assessing the implementation of the BICI recommendations in June 2016. The report found that the Government of Bahrain failed to implement a majority of the recommendations. 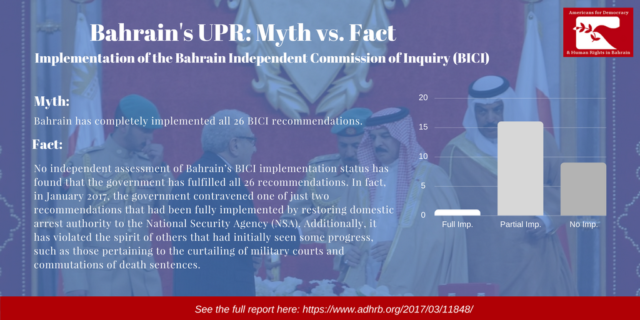