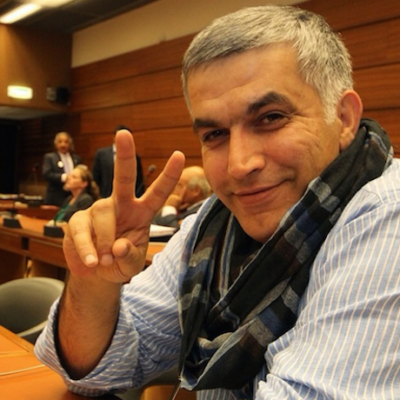 6 August 2017 – The Foreign & Commonwealth Office’s silence on the sentencing of human rights figure Nabeel Rajab in Bahrain has been called “appalling” in a letter to the Foreign Secretary, signed by 17 rights groups & MPs today.

The President of the Bahrain Centre for Human Rights faces trial tomorrow, 7 August, for tweeting about the Yemen war and torture in Bahrain. He faces up to 15 years. He was sentenced in absentia following an unfair trial to two years in prison for giving media interviews on 10 July. Rajab has not been allowed to speak to his family since 15 July. Rajab has been held largely in solitary confinement in the first nine months of his detention. This led to his health deteriorating in April, and he is currently recovering in the Ministry of Interior clinic.

Despite British Embassy representatives regularly attending Rajab’s trials, the 10 July sentence, which clearly violated his freedom of expression, went unremarked on for over two weeks. On 26 July, the FCO stated in response to a parliamentary question: “We note the two year sentence given to him and understand there are further steps in the judicial process, including the right of appeal.”

The FCO’s response evaded providing an opinion on Rajab’s sentence and compares unfavourably with its response to a previous sentence Rajab received in 2012 on similar charges related to his expression. At that time, Middle East Minister Alistair Burt stated he was “very concerned” at the sentencing of Mr. Rajab on charges related to his free expression, and added, “I have made it clear to the Bahraini authorities that the human and civil rights of peaceful opposition figures must be respected.” Burt was reshuffled out of the Foreign Office in 2013, but reappointed Middle East Minister following the June election.

The rights groups told the Foreign Secretary today: “British silence on this case contradicts FCO support for human rights defenders internationally and the FCO’s own past record on Mr. Rajab’s case. We urge you to overturn this policy of silence and support Nabeel Rajab and all human rights defenders in Bahrain … by condemning his sentence and calling on the Government of Bahrain for his immediate and unconditional release and the dropping of all pending charges against him.”

“The FCO’s weak language on Nabeel Rajab’s case falls in line with the UK’s overall disappointing position on free expression in Bahrain and more widely in the Gulf. Boris Johnson should call for Rajab’s immediate release and take broader steps to ensure that human rights – not just arms sales – are a priority in the UK’s relations with Bahrain and the other Gulf states”, said Rebecca Vincent, UK Bureau Director for Reporters Without Borders.

“Instead of working with civil society and human rights defenders to address systemic problems and reform in Bahrain, as it has previously committed to, the government of Bahrain continues to persecute human rights defenders like Nabeel Rajab simply for exercising their right and duty to promote and protect human rights,” said Andrew Anderson, Executive Director of Front Line Defenders.

Sayed Ahmed Alwadaei, Director of Advocacy, Bahrain Institute for Rights and Democracy: “Boris Johnson should be ashamed of his isolated policy, which is at total odds with the foreign policy of all Bahrain western allies and partners. True partners should speak out to their allies when they cross the line. The Bahraini government’s abuses don’t seem to matter to Boris Johnson’s Foreign Office, which only appears to be vocal against repression when it’s by governments that don’t host the Royal Navy or trade with the UK.”

The Bar Human Rights Committee of England and Wales is also separately seeking an urgent meeting with the Foreign Secretary to raise concerns over the treatment of human rights defenders in Bahrain and about the breaches of freedom of expression and fair trial and due process in Nabeel Rajab’s case.

“The trial in absence and subsequent imprisonment of Nabeel Rajab was in flagrant breach of his rights to a fair trial process. The criminalisation of Nabeel Rajeb – for sharing an opinion – is contrary to international rights and protections of freedom of expression. Whilst Mr. Rajab’s health continues to deteriorate, due his treatment in prison, this case stands as a sad indictment of Bahrain’s attitude to citizens who voice criticism. It is not too late for proper due process to be applied in this case; this would result in Mr. Rajab’s immediate release,” said Kirsty Brimelow QC of Doughty Street Chambers.