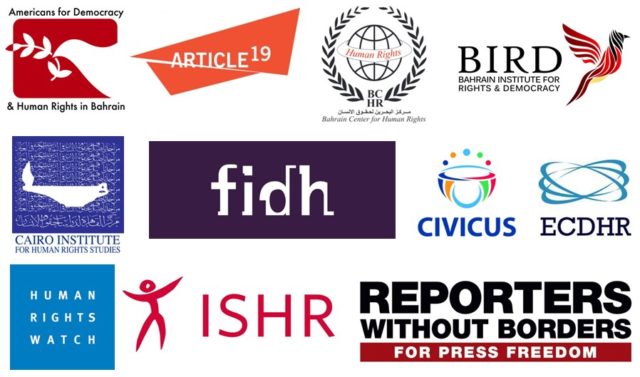 31 August 2017 – Today, Americans for Democracy & Human Rights in Bahrain (ADHRB) along with other international human rights organizations have sent letters to 56 governments calling for increased pressure on the Bahraini government to make significant and immediate human rights reforms.

The governments who received the letter joined in supporting a joint statement from the 35th session of the United Nations Human Rights Council (HRC) reaffirming a joint statement from the 32nd session of the HRC in 2016 that outlined important indicators for international bodies to consider when analyzing emerging situations of concern. “We are convinced that these and other considerations can offer a useful guide for States, to help us decide, in an objective and non-selective manner, when the Council should usefully engage with a concerned State, to prevent, respond to or address violations and to assist in de-escalation of a situation of concern.”

The rights groups have addressed each of the indicators outlined in the 2016 joint statement on country situations of concern and found “Bahrain demonstrably meets the criteria that should compel states and the Council to act to address this situation.” The letter ultimately urges the states to increase diplomatic pressure that “should include, but are not limited to, national statements and joint statements under Items 4 or 2 of the Council’s agenda, and ultimately a resolution by the Human Rights Council.”

“For two years, the human rights situation in Bahrain has been neglected by the Human Rights Council based on political motivations of states,” said ADHRB Executive Director Husain Abdulla, “We were very pleased to see the recent initiatives led by Ireland to set out objective criteria to determine when the Council must act. We feel that the human rights situation in Bahrain has met each requirement set forward by these criteria, so now these states need to follow through on their commitment to act. It is finally time for a resolution from the Human Rights Council addressing the human rights crisis in Bahrain.”

To read the full text of the letter, please continue reading below or click here for a PDF.

We, the undersigned Bahraini, regional and international human rights organizations, remain alarmed at the ongoing human rights crisis in the Kingdom of Bahrain. We are also concerned about the diminished response from states at the Human Rights Council since the situation began to dramatically deteriorate over one year ago. We welcome your country’s commitment to address situations of concern based on the objective criteria laid out in the joint statement delivered by Ireland at the 32nd session of the HRC. This commitment was reiterated in a subsequent joint statement on the improvement of membership standards, signed by 48 states at the 35th session this year. However, we have yet to see this commitment translate into a principled response to the deteriorating situation in Bahrain. As this letter outlines in detail, Bahrain demonstrably meets the criteria that should compel states and the Council to act to address this situation. We therefore call on your delegation to uphold your pledge and renew both individual and collective initiatives at the Council to address the Bahraini Government’s intensifying human rights violations.

The Government of Bahrain has continued to suppress all forms of opposition, criticism, or dissent in 2017. The Government began the year by ending a de facto moratorium on the death penalty when it executed three victims of torture after trials marred by serious due process violations. In January, the Government restored domestic law enforcement powers to Bahrain’s National Security Agency (NSA), an institution implicated in systematic and widespread torture in 2011. In April, the King approved a constitutional amendment allowing civilians to be tried in military courts, further eroding the limited reforms made in line with the recommendations of the 2011 Bahrain Independent Commission of Inquiry (BICI) report. Bahrain’s leading Shia cleric, Sheikh Isa Qassim, was convicted of money laundering in May on politically motivated charges, and the Government used lethal force to clear a months-long peaceful sit-in around his home, killing five individuals in the process, injuring hundreds more, and arresting 286 individuals. In May, courts disbanded the Kingdom’s last major opposition political society, Wa’ad, and in June the Government indefinitely suspended operations at the country’s only independent newspaper, Al-Wasat. Meanwhile, the Government continued its relentless suppression of civil society, committing reprisals against activists and their families and convicting Bahrain’s leading human rights defender, Nabeel Rajab, for commenting on continuing human rights abuses during television interviews and on social media, violating his right to freedom of expression.

It is clear that the Government of Bahrain has failed to uphold its international obligations to safeguard human rights and has repeatedly acted to violate and curtail the fundamental rights of people in the country. Bahrain’s current human rights situation manifestly fulfills the criteria set out in the June 2016 joint statement committing state signatories to engage – strong action is imperative to prevent further instability.

We therefore call on your Government to individually and collectively with others respond to the human rights crisis in Bahrain. Such efforts should include, but are not limited to, national statements and joint statements under Items 4 or 2 of the Council’s agenda, and ultimately a resolution by the Human Rights Council.