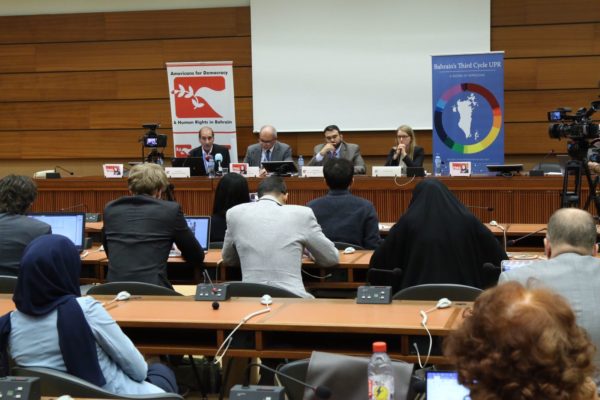 Today, 20 September 2017, at the United Nations (UN) offices in Geneva, Americans for Democracy & Human Rights in Bahrain (ADHRB) held a panel discussion on Bahrain and the Universal Periodic Review (UPR) process as a side event to the 36th session of the UN Human Rights Council. The panel, titled was moderated by ADHRB’s Executive Director, Husain Abdulla, while the speakers on the panel were Khalid Ibrahim, Executive Director of the Gulf Center for Human Rights; Sara Brandt, Policy & Research Analyst at CIVICUS; Zahra Albarazi, Senior Researcher at the Institute on Statelessness and Inclusion; and Jawad Fairooz, a former Bahraini MP and now Executive Director of SALAM for Democracy and Human Rights. The discussion coincides with the UN Human Rights Council’s formal adoption of its third round of recommendations to Bahrain under the UPR on Thursday, 21 September 2017. The panel examined the previous set of recommendations and assessed how Bahrain has measured up, addressed what it must do going forward, and made recommendations to the international community on how to ensure future compliance. 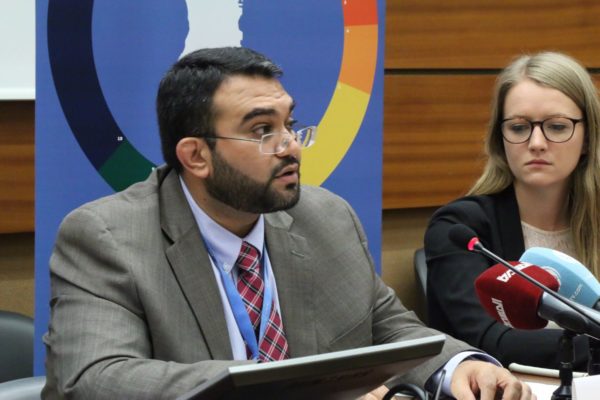 ADHRB Executive Director Husain Abdulla opened by explaining the context, both as to the procedural background at the Human Rights Council and with respect to the situation on the ground in Bahrain. He noted that during the previous UPR cycle dozens of states comprising over a third of the UN’s total membership identified 176 specific recommendations to improve Bahrain’s human rights performance, such as the elimination of torture and an end to the practice of denaturalization (stripping native-born Bahrainis of citizenship). This is Bahrain’s second review since the government violently suppressed the mass peaceful protest movement in 2011, initiating a widespread crackdown on basic freedoms that has only intensified in the years since. In the five years between the second and third UPR cycles, Abdulla noted, the Government of Bahrain failed to fully implement any recommendations, making perceivable progress on about 1% (two out of the 176 total). It made no effort to institute 76% of the proposed reforms, and rejected 10% of them outright. By all measurable standards, Bahrain’s engagement with the UPR – or lack thereof – has demonstrated a clear refusal to reform.

Because of this failure, Abdulla noted, many of the recommendations made during this round of the UPR build on the reforms previously called for. Some states have, however, made positive new recommendations in reaction to the alarming deterioration of human rights conditions, he added. States including Belgium, Germany, the Czech Republic, and the United States have urged the government to curb its use of arbitrary deprivation of citizenship to target civil society actors, a practice that has stripped hundreds of their citizenship since 2012. These recommendations mark the first international effort to address this practice at the kingdom’s UPR. It is imperative that the international community seize on current momentum to secure real change, Abdulla noted. Upon adopting this cycle’s recommendations, the Government of Bahrain must face concerted pressure to transparently implement these reforms, he concluded, or we will be facing an even worse crisis by the next review in 2022. All states valuing human rights – members of the Council and others – should pressure Bahrain by means of joint statements and Council resolutions to meet its obligations as a member of the international community. 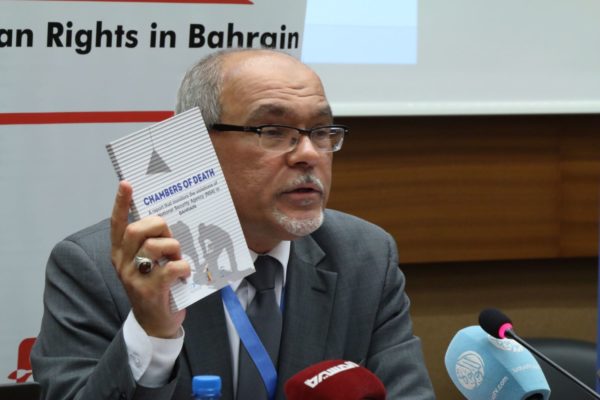 Jawad Fairooz began his remarks by noting that at Bahrain’s first UPR review there were only eight recommendations, as against the nearly 200 at the second review, reflecting both the outbreak of crisis as the 2011 uprising was crushed and the increased international scrutiny that this repression brought on Manama. He reiterated that the repetition of a very high percentage of recommendations from one UPR cycle to the next is a “clear and significant indication” that the international community is not convinced Bahrain is sincerely pursuing reform. With respect to developments on the ground, Fairooz described the bloody May 2017 raid on the town of Duraz and the associated siege around the home of Sheikh Isa Qassim, Bahrain’s most respected Shia cleric, and recalled the case of jailed human rights defender Nabeel Rajab. He noted that just the day before this event 22 detained civil society figures from Bahrain had sent a letter to the Human Rights Council apprising it of their situation. Given the clear signals sent by the international community in the latest two UPR cycles, and the equally clear fact that Bahrain is set on noncooperation with the international community, it requires firmer action from the UN Human Rights Council and member states. “Bahrain has been given enough chances,” Fairooz said, calling for concrete measures such as appointment of a country-specific Special Rapporteur on Bahrain, the convening of a special session of the Council on the situation in Bahrain, and a clear resolution by the Council addressing the Bahraini government’s shortcomings in the UPR process. 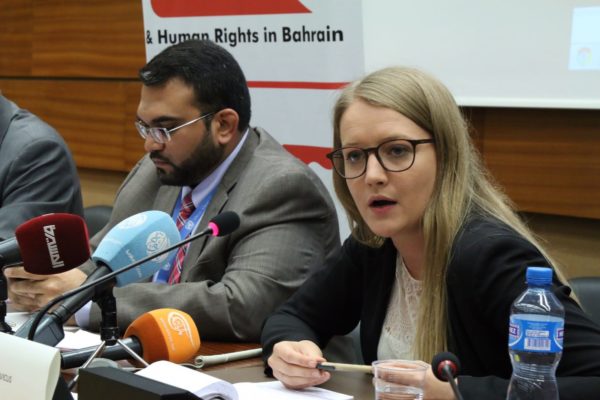 Sara Brandt used her remarks to highlight that, according to the CIVICUS index used to measure civil society space across countries, Bahrain is not in the “Closing” category but is fully “Closed,” meaning there is no room left for civil society to operate. She noted that the three key freedoms needed by civil society – freedom of association, of assembly, and of expression – are all absent in Bahrain. Legislation governing association in Bahrain does not allow any independent civil society organizations to function. She quoted provisions from the law forbidding NGOs from engaging in “political” activity, authorizing the executive branch to dissolve organizations said to have contravened vague social “norms,” and requiring prior state approval for any organization to accept funding from foreign donors. She reports 30 civil society organizations dissolved in Bahrain since 2000, with an observable escalation in such dissolutions since 2016. New legislation passed since the 2012 UPR cycle has made the situation worse, Brandt added. A recent cybercrime law criminalizes encryption, which by definition would make the use of WhatsApp and similar private chat and message services illegal. Forty people have been arrested for making use of the Internet under such laws, and can face sentences of up to 10 years. Other laws impose prison sentences for “insulting” the flag or the monarchy. Individuals who “are in fact just peaceful voices of dissent” are “persecuted through the counterterrorism law,” she observed. A 2016 decree regulating newspapers outlawed online news coverage posted without the prior approval of the government, paving the way for the recent closure of al-Wasat, Bahrain’s last independent media outlet. Recalling that when Bahraini human rights activists have been detained and prosecuted in the past, it was only strong pressure from the international community that had been able to secure their release, she concurred with the other panelists that international action is imperative. This is the only tactic that has seemed to work with the Bahraini government in the past, and the commitment to keep positive pressure on Manama must be renewed. Brandt concluded with the observation that the only way to truly attain stability and security in any country is to allow space for social participation so that citizens are not pushed into violence as the only means to seek change. Closing space for civil society is a worldwide trend today, but it is “particularly severe” in Bahrain, she said, urging the international community to “call out” Bahrain on its repressive laws and practices. 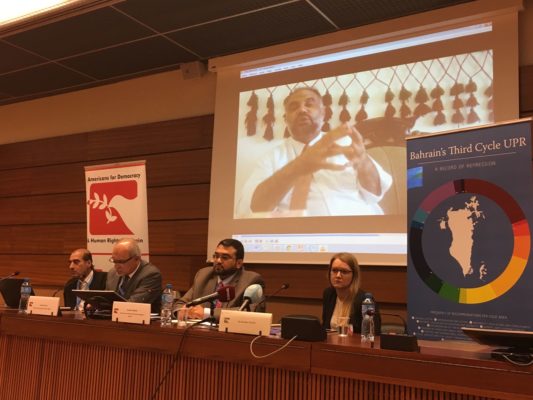 The panel also presented a video sent by a Bahraini human rights activist who was not able to attend in person, Ebrahim al-Demestani. Al-Demestani is a paramedic who was targeted in 2011 after he participated in the emergency medical response to injuries at the Pearl Roundabout demonstrations. He and 46 other medical staff who treated injured protesters were detained, tortured, and sentenced to years in prison for carrying out the ethical duties of their profession. He recalled more recent events in Bahrain that are emblematic of the ongoing repression, such as the reinstatement of the feared National Security Agency’s powers of arrest and the shooting of the young demonstrator Mustafa Hamdan in Duraz in January 2017. Hamdan had to be transported to the hospital by loved ones, al-Demestani noted, because the state-run ambulance service is known to detain those injured by security forces. The private hospital they brought Hamdan to would not admit him due to government policy issued in a circular to hospitals which forbids them from treating injured protesters without notification to the police, who will then detain the injured person. Hamdan’s treatment was delayed as he had to be moved to a public hospital, and he died in the ICU in late March. Al-Demestani concluded by noting that human rights defender Ebtesam al-Saegh had been arrested for her participation in the 34th session of the Human Rights Council, which clearly highlights how Bahrain flouts the institutions of the international community.

Panelist Zahra Albarazi participated by Skype and addressed the flaws in the Bahraini government’s conception of nationality, a key dimension of human rights as “the legal link between an individual and the state.” She noted three key problems in Bahrain’s law and practice on nationality, which have been highlighted in a UPR submission she coauthored with ADHRB. The first is the situation of the historically stateless group known as the biduns, who are a distinct social class in Bahrain and other Arab Gulf countries and are defined largely by the very fact of their statelessness, which pushes them to the margins of society and deprives them of all legal rights. Statelessness among the biduns is transmitted from generation to generation as the state refuses to recognize them as persons before the law. The second dimension is gender discrimination in transmission of nationality. Bahrain recognizes nationality by birth only on patrilineal lines, so that a Bahraini mother cannot pass her citizenship on to her child if the father is not a native Bahraini. Lastly, Albarazi raised the issue of “arbitrary deprivation of nationality” via decrees which have been used to strip the nationality of hundreds, often based on their political leanings. Though these actions are “shrouded” by rhetoric of terrorism, Ms. Albarazi stated, those left stateless are often individuals who have “voiced an opinion opposed to the ruling regime.” 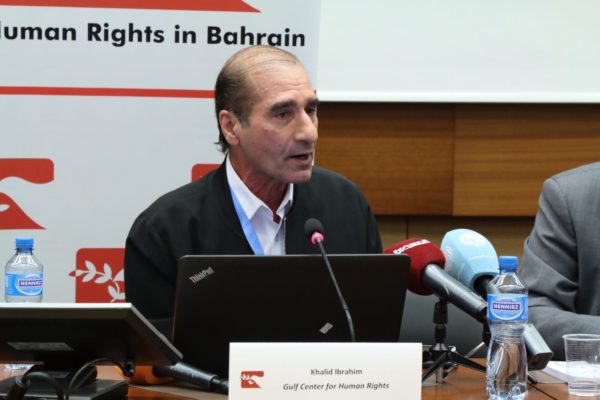 Khalid Ibrahim concluded the panel, noting that the UPR is a unique mechanism that has the potential to truly contribute to positive change. Citing Ireland’s third-cycle recommendation to “take urgent steps to facilitate the work of civil society and human rights defenders, and guarantee protection of all persons from intimidation or reprisals for seeking to cooperate with the United Nations,” Ibrahim described the Bahrraini government’s intensified campaign of reprisals against civil society actors and particularly human rights defenders. The authorities have targeted virtually all Barhaini human rights defenders in some fashion, typically preventing them from engaging the Human Rights Council and other UN mechanisms. Yet there is not sufficient action to stop these practices or to provide recourse for those effected by reprisals. Ebtesam al-Saegh recently reported her to torture by the NSA, but this is a dangerously common practice in Bahrain. Leading human rights defender Abdulhadi al-Khawaja, who cofounded GCHR and the Bahrain Center for Human Rights (BCHR), was kidnapped, tortured, sexually assaulted by the authorities in 2011. He remains in prison, where he has experienced arbitrary deprivation of medical care and other inhumane conditions. Likewise, Nabeel Rajab, BCHR’s current president and another cofounder of GCHR, is imprisoned for media interviews, despite his additional work with major international groups like FIDH and Human Rights Watch. Zainab al-Khawaja, a human rights activist and the daughter of Abdulhadi, is now living in exile due to the threats to imprison her as well. There must be stronger action at the Council and at the international level more broadly to hold perpetrators of such abuses accountable, as there is only impunity in Bahrain.