Wednesday 14 February – On this 7th anniversary of the mass peaceful protests in Bahrain, Americans for Democracy & Human Rights in Bahrain (ADHRB) stands in solidarity with the thousands of Bahrainis who called for more democracy and fundamental freedoms. Join us outside the Embassy of Bahrain in Washington DC as we stand in support with the people of Bahrain in their struggle for human rights and democratic principles and call for the release of all political prisoners and an end to torture and abuse.

In front of the Embassy of Bahrain : 3502 International Dr NW, Washington DC 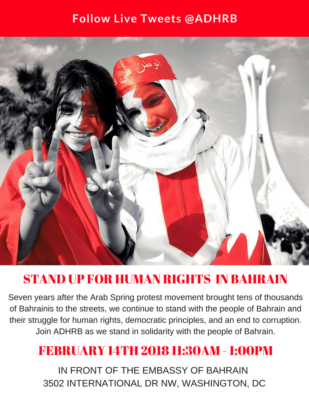