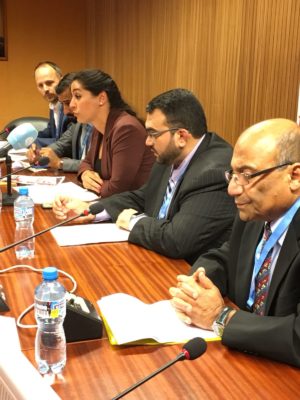 Ms. Matar opened the panel and noted some of the necessary criteria for an election to be considered free, fair, and credible. Among the criteria is the need for the elections and voting to be free from voter coercion or intimidation, the existence of strong free expression and free assembly protections, and the absence of discriminatory or arbitrary actions taken to prevent individuals from exercising their political rights, among others. Ahead of the elections, this panel addressed whether the upcoming elections will fulfill the conditions for a free and fair election as well as how the situation on the ground impacts the upcoming elections. 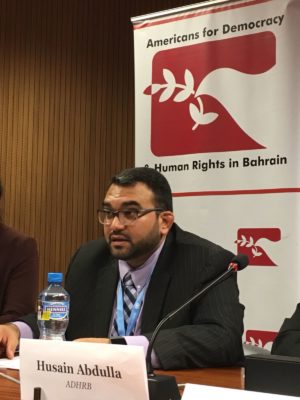 Mr. Abdulla highlighted the dissolution of political groups Amal, Wa’ad, and Al-Wefaq, and the arbitrary detention of their leaders Sheikh Ali Salman, Ebrahim Sharif, and Khalil AlHawachi. Mr. Abdulla noted the recent amendment to Law No. 14 of 2002, which imposes a permanent ban on persons previously convicted to a prison sentence of six months or more who are seeking election in the Council of Representatives; leaders and members of dissolved political organizations that were dissolved by a final sentence for criminal acts; and anyone who disrupts parliamentary life by terminating or leaving the Council of Representatives. Mr. Abdulla also noted the lack of independent monitoring of elections and the silencing of the press, particularly the closure of Al-Wasat, the country’s only semi-independent newspaper, in 2017. He also noted the use of counter-terror laws to imprison journalists, human rights defenders, and political activists, as well as the growing trend of citizenship revocations against these individuals, with over 719 individuals denaturalized since 2012. Mr. Abdulla called on the Human Rights Council to deliver a resolution on the human rights situation in Bahrain, and called for Bahrain to reinstate dissolved political parties and release all political prisoners in advance of the 2018 parliamentary election. Lest anyone thinks that outside pressure has no effect, Mr. Abdulla stated that Bahrain reacts to international pressure. Conversely, once international pressure ceases, there country sees an increase in human rights violations, highlighted by the arrests of prominent rights defenders Nabeel Rajab, Ebtesam al-Saegh, and Sayed Alwadaei 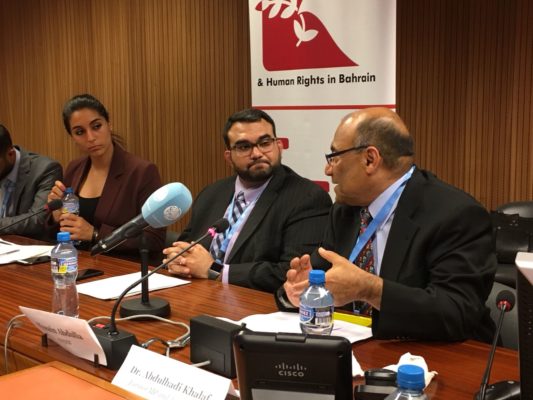 Dr. Abdulhadi Khalaf was previously a Member of Bahrain’s Parliament in 1973 and 1974, and a political prisoner in Bahrain in 1974 and 1976 before having his citizenship arbitrarily revoked in 2012. In his remarks, Dr. Khalaf highlighted recent events which, he said, show the pattern of suppression in Bahrain. He noted in particular the case of Nabeel Rajab, who was sentenced to prison for “spreading false rumors during a time of war” and “insulting a foreign country;” charged based on Twitter posts that were critical of Bahrain’s activities with Saudi Arabia in Yemen and criticism of torture in Bahrain’s prison. His sentence was affirmed by the Court of Appeals on 5 June 2018. Dr. Khalaf noted that this sentence sends a message to other activists that any opposition, including on social media, can lead to severe punishment and sanctions. In this vein, Dr. Khalaf drew attention to the Bahraini government’s reaction to the French Ambassador to Bahrain’s tweet in solidarity with Nabeel. Although the tweet is in line with official French policy regarding his case, ten days after she posted it, the Bahraini press demanded her removal from Bahrain. 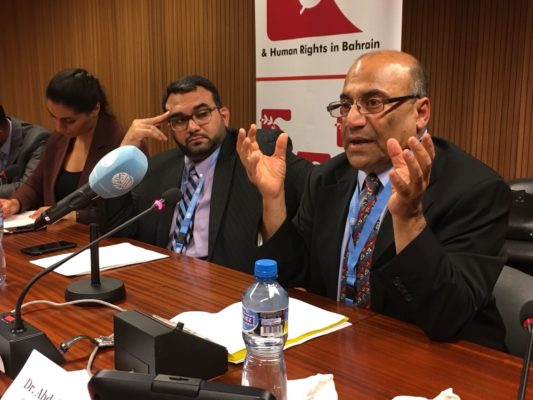 Dr. Khalaf also echoed Mr. Abdulla’s comments concerning the trend of denaturalizations, stating that all three Bahraini panelists had been stripped of their citizenship. He highlighted that the loss of citizenship is the loss of civic rights, the ability to participate in elections and express opinions. He also discussed the recent change to the law on political rights, which remains intentionally vague so as to give the government extensive leeway to threaten and intimidate individuals, and suppress political activity. While these are the most recent actions by the government to suppress dissent, Dr. Khalaf noted they built on longstanding free expression and free assembly restrictions that have conspired to ensure that the Bahrain’s election process has been unfair and not free from the outset. The unfairness of the system is compounded by structural inequalities of power in the government between the Council of Representatives and the Shura Council, and the pressure that the royal family can exert on both bodies that ensure it can effectively govern in an autocratic manner. As a consequence of this, elections, and the laws governing elections, have always remained strictly under the control of the King. 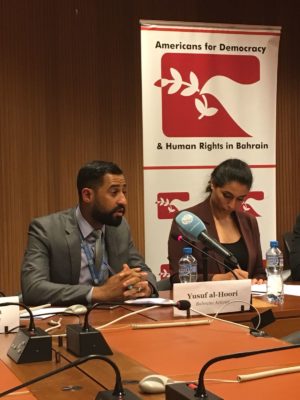 Yusuf al-Hoori is an expatriate Bahraini activist who had his citizenship revoked because of his activism and whose human rights work has meant his family has faced reprisals from the government, particularly due to his engagement with the United Nations Human Rights Council. In his remarks, Mr. al-Hoori described a series of events occurring in May 2017, when he was attending Bahrain’s Universal Periodic Review (UPR) session. During this, the government targeted his family as well as the family of Sayed Alwadaei, a Bahraini activist living in the UK. While Mr. al-Hoori was in Geneva to attend UPR events, his father and sister were arrested and tortured in direct reprisal for his activism. Sayed Alwadaei’s mother-in-law and brother-in-law were also arrested during that Council session. Mr. al-Hoori noted that neither his case nor Mr. Alwadaei’s cases are unique. Rather, reprisals against human rights defenders, both in Bahrain and abroad, is systematic. He then recalled the cases of Ebtesam al-Saegh, Nabeel Rajab, and Hassan Mushaima, who are all still currently facing harassment and ill treatment in reprisal for their human rights activities. 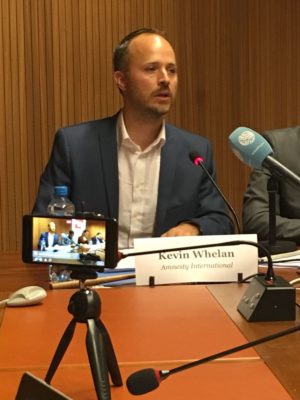 Kevin Whelan discussed Amnesty International’s 2017 report “No One Can Protect You: Bahrain’s Year of Crushing Dissent,” which focused on the crackdown of civil and political rights. Mr. Whelan stated that the situation in Bahrain is “alarming,” and noted the repression of freedoms of expression and assembly. He particularly noted the use of counter-terror laws to target and imprison human rights defenders. Mr. Whelan stated that despite the worsening human rights situation in Bahrain, other states remain silent. There is, he noted, a direct link between the absence of international political pressure and the aggressive manner in which the Bahraini authorities repress rights defenders and activists. Mr. Whelan also noted Bahrain’s refusal to cooperate with the United Nations, including its rejection of visit requests from the Special Rapporteurs on torture, assembly and association, expression, and the situation of human rights defenders, as well as visit requests from the High Commissioner for Human Rights. He highlighted the fact that other organizations outside of the UN have similarly been barred from the country, including ADHRB, Amnesty International, and Human Rights Watch. 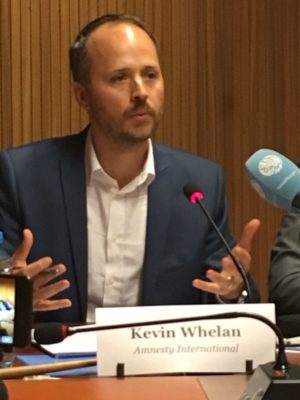 Mr. Whelan echoed the High Commissioner’s remarks and concerns for the deteriorating human rights situation and closure of civil society in Bahrain, and noted the brazen attempts by the Bahraini government to influence the UPR outcome by silencing activists, including the arbitrary detention of 32 activists in advance of the UPR session. Mr. Whelan posed the question – what can be done? He echoed the comments of Mr. Abdulla, noting that the Irish principles for objective criteria should be followed in the Council. He noted that enforcing these principles is a political challenge, rather than a human rights challenge. He noted also the work of treaty bodies on Bahrain, including the High Commissioner for Human Rights, the Human Rights Council Special Procedures offices, and the Treaty Bodies, including the Committee Against Torture and the Human Rights Committee, which will review Bahrain’s obligations under the International Covenant on Civil and Political Rights in July 2018. He noted that these experts have all expressed a willingness to engage with the Bahraini authorities to provide expert advice, which the Bahraini government has refused to accept. He did note however, that other States can use the work of these expert bodies to engage on human rights with Bahrain or in the Council and United Nations.

The question and answer session focused in particular on concerns over political will. It was stressed that political will does not come from within and is in fact a result of external and internal pressure. External pressure proves to be a major factor considering the lack of political will on part of Bahrain’s two biggest allies, the United Kingdom and the United States of America. Further, it was stressed that the treaty body documentation is an underutilized resource in terms of ensuring maximum utilization of the outcome of the review carried out by expert bodies. In conclusion, it was highlighted that on account of the lack of freedom of voters, as well as the elected members and a flawed constitutional framework, Bahrain’s upcoming elections face numerous challenges. For this reason both external and internal pressure is crucial to influence the powerful and to push demands in the right direction. Finally, the panelists noted the significance of these events at the Council to the Bahrainis on the ground. 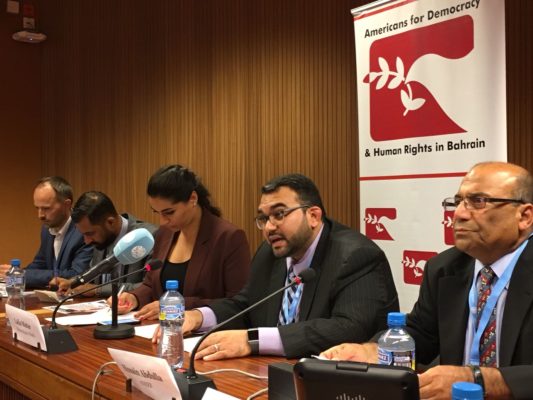