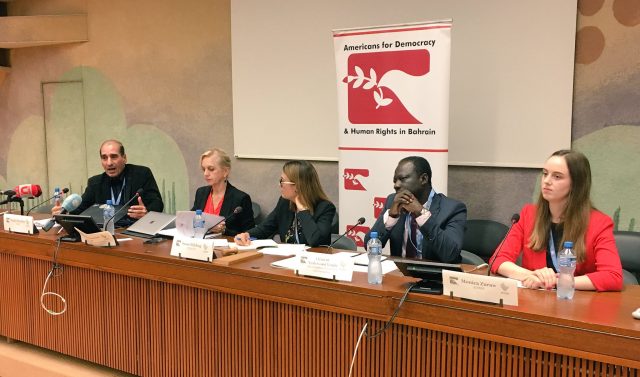 On Wednesday 12 September, Americans for Democracy & Human Rights in Bahrain (ADHRB) hosted a side event at the 39th session of the United Nations (UN) Human Rights Council (HRC), in cooperation with the Gulf Centre for Human Rights (GCHR). Susan Wilding from CIVICUS moderated the event, which featured the Special Rapportuer on the freedom of peaceful assembly and association Clement Nyaletsossi Voule, the Chair of the Bar Human Rights Committee Kristy Brimelow, Khalid Ibrahim, the Director of GCHR, and Monica Zuraw, Advocacy Fellow at ADHRB. The discussion focused on the repression of freedoms in Bahrain, including freedoms of expression, association, and assembly.

The event began with moderator Susan Wilding discussing the importance of getting activists from different countries to attend the Human Rights Council, in order to drag the Council’s attention to the human rights situation in these countries. She then outlined the difficulties of this activity in the case of Bahrain and noted that CIVICUS’s monitor of civil space has tagged Bahrain as being ‘closed,’ thus indicating the excessively high restrictions placed on civic and public space in the kingdom. Ms. Wilding traced this closure of civil space to the Bahraini Government’s activities such as denaturalization, arbitrary detention, enforced disappearances, and torture of human rights defenders – which began following the 2011 pro-democracy demonstrations and have since amplified. 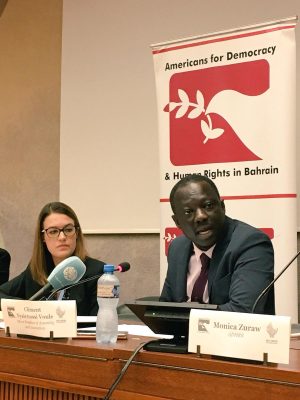 The next speaker, Special Rapportuer (SR) Clement Nyaletsossi Voule, began his comments by asserting that freedom of assembly and association form the cornerstone of democracy, and states must ensure their provision. He then stated that over the past two years, five press releases and 16 communications had been issued to Bahrain by the UN Special Procedures to which Bahrain had provided 14 detailed answers. He noted, however, that despite this act of co-operation by the government, the incidence of human rights violations in Bahrain had increased. Mr. Voule outlined the systematic crackdown on dissidence and the criminalization of basic rights, which are being carried out by the government and grounded in the domestic legislation. In particular, the SR raised concern on the Law of Association and the overtly broad aspects of the Penal Code, which aimed at protecting society from terrorist acts, but was instead used by the state to label protestors as terrorists. SR Voule also made note of the recent amendment to the electoral law, which permanently banned members of now-dissolved political parties, as well as individuals who had spent more than 6 months in prison, from running for election. He stated that the international community must make Bahrain aware that its ongoing violations of human rights were not invisible and that he and his office would remain committed to work alongside the government to ensure that freedom of assembly and association were allowed in the kingdom. SR Voule concluded his remarks by stating that in light of the upcoming November parliamentary election, he called on Bahraini authorities to respect the people’s rights of political participation and to repeal the amendment to the electoral law. 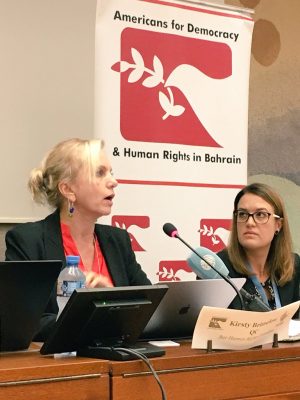 Ms. Kristy Brimelow then discussed her organization’s longstanding engagement with the situation of human rights in Bahrain. She noted some of the core issues included authorities prohibiting visits from UN Special Procedures, independent NGOs and Human Rights Organizations, as well imposing travel bans on Bahraini human rights defenders. She noted that these actions were against the Bahraini state’s obligations under human rights law. Ms. Brimelow then discussed her experiences of being in Manama, Bahrain in 2009, and witnessing the trial of 35 defendants belonging to the Haq Movement of Civil Rights and Democracy, a Bahraini NGO which no longer exists. She also noted the Bahraini state’s use of the counter-terrorism act, which was criticized by the then Special Rapporteur on terrorism, and its role in shutting down human rights activities in the kingdom. Ms. Brimelow also made reference to the Bahraini Independent Commission of Inquiry (BICI), established to investigate allegations of human rights violations with respect to the 2011 pro-democracy protests. She noted that the BICI had submitted findings of torture and forced confessions in its report, accepted by the King of Bahrain, but that impunity still prevailed due Bahrain not actually complying with the recommendations of the Commission. She further added that in 2017, Human Rights Watch had published a report outlining the deteriorating human rights position in Bahrain – addressing the ending of the de facto moratorium on the death penalty, and the reversal of the BICI’s recommendations with regards to the power of the National Security Agency. Ms. Brimelow then discussed that Bahrain had responded to criticism by releasing a report in September 2018, which placed emphasis on the Ombudsman’s office and the National Human Rights Institution and denied allegations of suppression of dissent. Ms. Brimelow however noted that the independence of these institutions from the government, as well as their effectivity, was questionable. Ms. Brimelow indicated that Bahrain should re-examine its penal code and its conflicts with the International Convention on Civil and Political Rights, as well as the Convention Against Torture, to which it was a signatory.

As a last point, Ms. Brimelow discussed the increasing turn towards applying the principle of universal jurisdiction and the case of torture carried out by Prince Nasser, which was conducted in the UK and which concluded that the Prince did not have immunity from his crimes. She concluded by stating that universal jurisdiction was being taken up by the EU and Germany, and that the principle was no longer about states holding other states to account, but instead about enabling individuals’ access to justice. 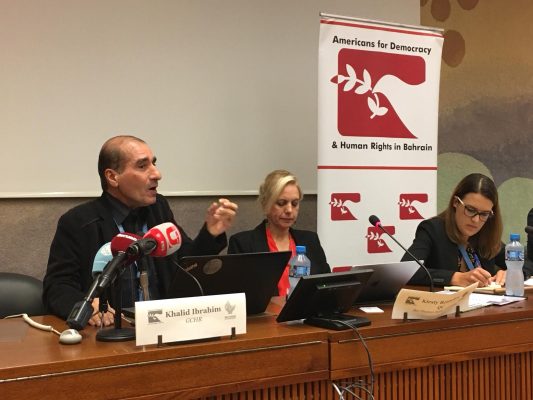 The next speaker, Mr. Khalid Ibrahim, began his remarks by pointing out that not a single Bahraini activist was in attendance for the HRC’s 39th session. He indicated Bahrain’s past reprisals as well as the travel ban being the reasons behind this. He then discussed GCHR’s recent report about the cases of human rights defenders imprisoned and tortured by Bahrain, such as Ebtisam al-Saegh, Nabeel Rajab, Abdulhadi al-Khawaja, and Hassan Mushaima. Mr. Ibrahim also discussed the impunity afforded to the torturers of these activists by the government, as well as the hunger strike carried out in front of the Bahraini embassy in London by Ali Mushaima, the son of Hassan Mushaima. He indicated that the upcoming parliamentary elections in November were not going to be free or fair, and that the Bahraini government had imprisoned a lot of peaceful and legitimate protestors. Mr. Ibrahim indicated that GCHR was trying to use foreign judiciaries in order to ensure that perpetrators of torture in Bahrain were facing justice elsewhere, if not in their own country. Mr. Ibrahim also contrasted Bahrain’s bid for membership in the Human Rights Council with the widely prevalent system if injustice present in the country. He asked for the release of the human rights defenders as a first step towards improving the human rights situation in Bahrain. 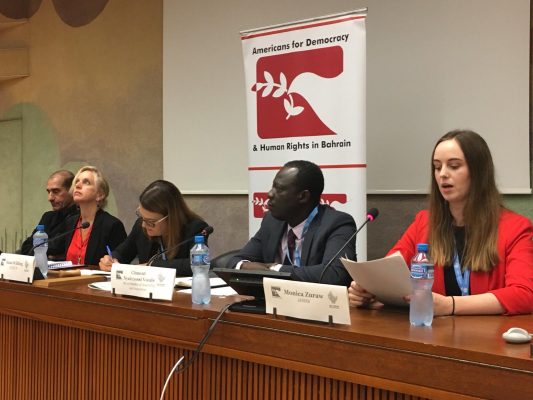 Subsequently, Ms. Monica Zuraw discussed the repression and criminalization of free expression in the kingdom, whilst mentioning the cases of Nabeel Rajab – imprisoned for tweeting critically about the violent war in Yemen, the lack of investigation into the murder of Karim Fakhrawi, the founder of the only independent paper in Bahrain, as well as the torture of journalist Nazeeha Saeed. Ms. Zuraw also raised the case of imprisoned opposition leader Sheikh Ali Salman, and the harassment faced by former political prisoner Mr. Mohamed Khatim, while expressing concern about the possibility of having fair and free parliamentary elections in November. Ms. Zuraw alse drew attention to the inhumane conditions in Bahraini prisons, with prison authorities denying access to healthcare to Mr. Hassan Mushaima. On this background, Ms. Zuraw then discussed Bahrain’s membership bid to the HRC, despite its reprisals against activists such as Ebtisam al-Saegh for her participation in the HRC proceedings during the previous session in June 2018. Ms. Zuraw ended her remarks by stating that states in the Council should strongly oppose Bahrain’s membership bid in order to prevent the spread of its negative influence internationally. 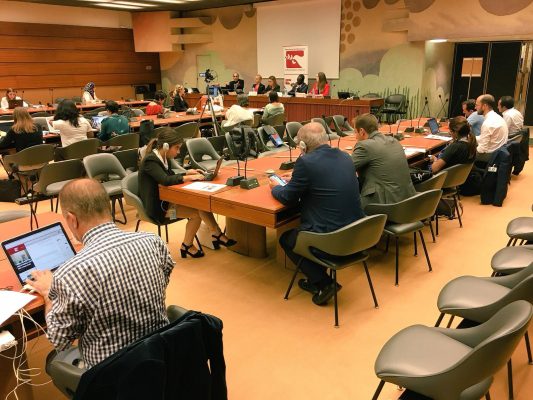 The event then entered a question and answer session, with the moderator and an audience member asking the panellists how the international community, and the HRC mechanisms, could use the opportunity of the upcoming Bahraini elections. An audience member also questioned what could be done to secure the release of human rights defenders mentioned by the panellists. Mr. Ibrahim’s response focussed on getting the USA and the UK to apply pressure on Bahrain publicly, which Ms. Brimelow echoed. She also added that the Ombudsman’s Office and the Bahraini NHRI should be strengthened, and that the government should issue an amnesty or pardon to the human rights defenders, especially to defenders such as Mr. Mushaima who are suffering from health issues. Ms. Zuraw also underlined the importance of the upcoming elections in exerting pressure on Bahrain and asked for the release of all political prisoners. Mr. Voule reiterated the panellists calls to the Bahraini government about lifting its travel bans on activists, and allowing country visits from the Special Procedures while also highlighting the need for international focus on Bahrain.