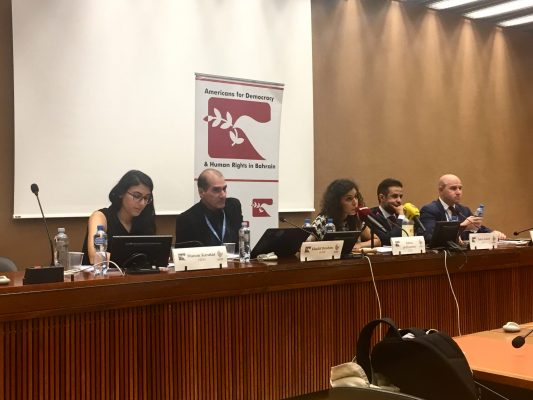 On Tuesday 11 September, Americans for Democracy & Human Rights in Bahrain (ADHRB) hosted a side event at the 39th session of the United Nations (UN) Human Rights Council (HRC), in cooperation with the Gulf Centre for Human Rights (GCHR). Salma al-Hosseiny from the International Service for Human Rights (ISHR) moderated the event, which featured Yahya Assiri from ALQst, Manon Karatas from the International Federation of Human Rights (FIDH), Khalid Ibrahim, the Director of GCHR, and ADHRB’s Director of Advocacy, Michael Payne. The discussion focused on women’s rights, the criminalization of free expression, the war in Yemen, and other Saudi human rights issues in advance of their November Universal Periodic Review (UPR). 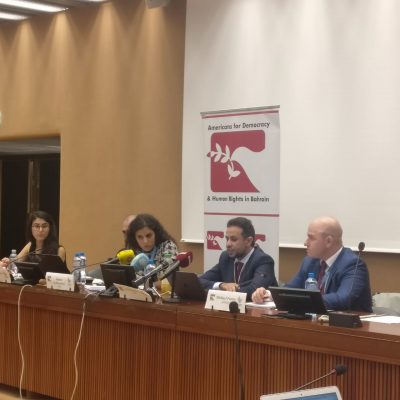 Mr. Yayha Assiri then took the floor and discussed topics such as the increased rate of executions in the Kingdom, the Crown Prince’s promises of reform and his contradictory actions of starting the violent war in Yemen, as well as the Saudi Law on Associations and Foundations. With regards to the latter, Mr. Assiri stated that the law was meant to regulate civil society organizations but instead has resulted in closing the door for civil society organizations to exist in the Kingdom. The arrests of women human rights defenders on the eve of lifting the ban on women driving demonstrated the concurrent Saudi campaign to punishing those who pushed for these reform. Mr. Assiri also drew attention to the increase in state sponsored hardline fatwas supported by the Grand Senior Council of Fatwas and the Grand Mosque of Mecca, which increasingly brand dissidents as infidels. He also noted that the Saudis sought to spread propaganda in media about the true human rights situation leading them to silence all critical voices domestically. On the international level, Mr. Assiri drew parallels with the attempts to silence critical voices by alluding to the recent state of Canadian and Saudi relations.

The next speaker, Mr. Khalid Ibrahim, asserted that the closure of civic space was the most pressing issue in the Gulf. He stated that there was no law allowing work in human rights organizations in Saudi Arabia and that working on human rights issues led to activists such as the founders of ACPRA, and the women’s right defenders being tried in the counter-terrorism affiliated Specialized Criminal Court, imprisoned, and then held incommunicado. He also referred to the male guardianship system and the government’s tacit support of the system to be against human rights principles. He then demanded that states act like Canada and put international pressure on the Saudi Kingdom, which had been elected twice as a member of the Human Rights Council, in order to improve the human rights situation in the Kingdom. 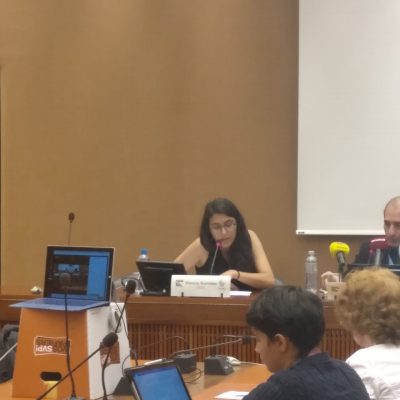 Ms. Manon Karatas then discussed the dismal implementation of the rights which had been allowed to women in Saudi Arabia. She discussed the delayed implementation of women’s right to vote, while also outlining the difficulty of women candidates in running their campaigns due to restrictions on these candidates from speaking to male voters. She also noted the state’s creation of obstacles for women to compete and vote in the municipal elections, by keeping a short three-week period of registration for voters, as well as taking off the names of women’s rights activists from the list of candidates. Ms. Karatas then discussed the right to drive recently afforded to Saudi women and indicated that the reasons for this allowance by the Saudi state were economic in nature, rather than based on human rights principles. She also discussed the Saudi state’s open show of support for the patriarchal male guardianship system in the last CEDAW review, and the discriminatory and harmful effects of this system on women in general, and women fleeing from abusive homes in particular. Ms. Karatas also discussed the string of anti-terrorism laws enacted by the Saudi government in 2013, and 2017 and the vague wording of these laws which allow the state the curtail activists’ fundamental freedoms. She also referred to the 2015 Law on Associations which made it possible for the state to interfere in the internal workings of civil society organizations. She joined the other panellists in noting the usage of the Specialized Criminal Court in imprisioning human rights defenders and concluded by asking states in the November UPR to recommend the Saudis to repeal these laws which criminalize dissent. 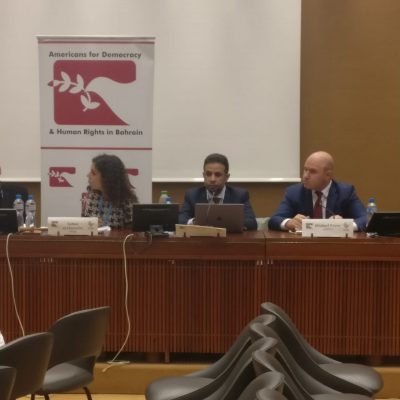 The next speaker, Mr. Michael Payne, discussed the common theme underlying human rights abuses in Saudi Arabia – namely the restrictions on the right to the freedom of expression and opinion. Mr. Payne noted the systematic campaign of silencing dissent carried out by the Saudis on the basis of laws which are open for interpretation by government authorities. Apart from the counter-terrorism laws mentioned by other panelists, Mr. Payne also drew notice to the Law on Printed Materials and Publications of 2000, which has allowed the government to widely censor diverse media such as books, television shows and radio shows on vague grounds of national security. The Anti-Cyber Crime Law of 2007 has empowered the government to regulate any content produced or stored on a computer and has led to the targeting and imprisonment of a number of bloggers, artists, poets and activists. Mr. Payne concluded his remarks by outlining the upcoming Saudi UPR as a welcome opportunity for the international community to engage with Saudi Arabia through a depoliticized universal peer-review process.

The event then entered the question and answer session, with an NGO representative asking a question about the centrality of hard-line wahabism and Sharia law in Saudi identity and the difficulties which this presented to human rights in the Saudi context. The panellists replies began with Mr. Ibrahim stating that extremism was increasing due to the teachings of religious bodies in the KSA and that this posed a threat to not only Saudi internal security but for security in the region as well. Mr. Assiri replied stating that the Saudi ruler controlled the fatwas decreed by the religious bodies and that the Saudi state used the Sharia law as a political tool by refusing to codify the law and instead applying articles based on vague interpretations of the law. Mr. Payne in his reply stated that the existence of ACPRA disproved the Saudi state’s propaganda of universal human rights being an external construct and added that Islam and human rights were not mutually exclusive of each other, but instead were compatible. 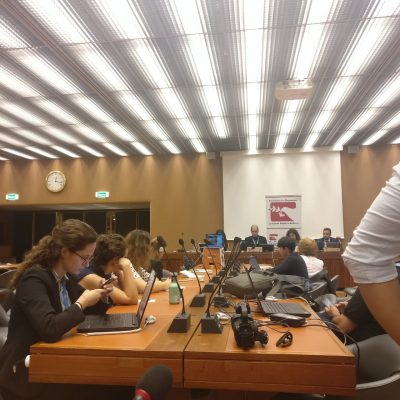 A second participant asked two final questions; the first about the possibility of conducting dialogues about human rights within the Kingdom through a perspective of religion and the second being about international barriers to reforms in Saudi Arabia that also empower the country’s impunity. In particular he asked whether America’s changed position would be enough to change the human rights situation within Saudi Arabia. Mr. Ibrahim replied stating that all religions were about peace and that such avenues should be promoted by the Saudi state, and that the Trump Administration had emboldened Saudi Arabia to carryout its repressive missions. He added that US and UK support to the Kingdom should be stopped. Mr. Payne replied stating that the UN system, as well as examples such as Sweden and Canada and other principled states should step forward in order to exert pressure on the Saudi Kingdom. Ms. Karatas, in her reply indicated the Saudi’s waning influence via the means of oil on the global scenario while Mr. Assiri stressed on the need for external pressure, and following the Canadian example in order to change the situation in Saudi Arabia.