Since the 2011 pro-democracy movement and subsequent government crackdown, restrictions on civil and political society in Bahrain have remained, and even tightened. In the years since, the small Gulf state has restricted access to fundamental human rights for much of the population. However, while the government has tried to overwrite the 2011 crackdown and clamp down on dissent, many vibrant images of the pro-democracy movement live on and, among them, salient street art remains. In the wake of 2011, politically-charged graffiti has become more and more prominent, especially surrounding the annual Formula 1 Grand Prix. This medium has taken on a renewed role in discharging a message of peaceful resistance to the Al Khalifa monarchy in recent years. 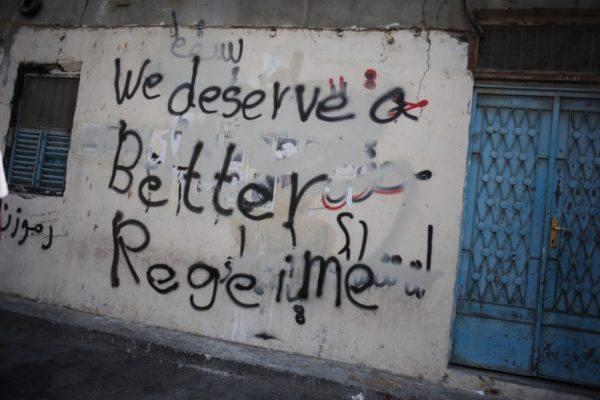 When the pro-democracy movement took hold in 2011, the Pearl Roundabout no longer served solely as a traffic circle in Manama, but became a center for Bahraini opposition protestors. Here and in the surrounding neighborhoods, new grounds were provided for politically-charged art with a message. Declarations of “we deserve a better regime” appeared on walls in the Sanabis suburb of Manama, while in the Pearl Roundabout banners reading further slogans of reform were raised.  More abstract pieces arose that explicitly targeted government officials. Among these pieces included a crooked chair adorned with a toy machine gun and two arrows – one etched with the word “martyrs” and 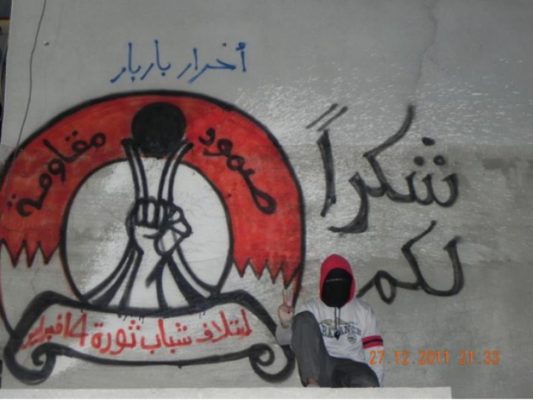 the other with “political naturalization.” On the seat of the crooked chair was an image of superglue. The art piece was in reference to Bahrain’s Prime Minister, who had been “stuck sitting” in his position for over 40 years, and sought to illustrate the corrupt and undemocratic nature of Bahraini politics . While protest art such as this decorated the streets of Manama and the Pearl Roundabout, it too fell victim to the government crackdown. Security forces would often come overnight to cover the slogans of the opposition graffiti art calling for reform and human rights.

Though the 2011 crackdown sought to silence dissidents in Bahrain, protestors have continued to fight for rights reform, using the Formula 1 Grand Prix as a new platform for doing so. After the cancellation of the Formula 1 in 2011 due to the ongoing government crackdown, the race returned to Bahrain the following year and was met with much controversy. Security forces and protestors clashed again, and police brutality resulted in the deaths of Salah Abbas Habib, a father of five, and photojournalist Ahmed Ismail Hassan. In the years since, the race has been met with increasing violence by the authorities. In 2016, 17 year old Ali Abdulghani was killed during protests around the time of the Grand Prix when 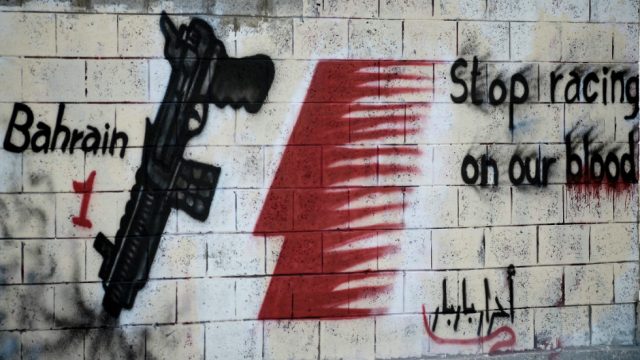 witnesses reported he was hit by a security vehicle. 2017’s protests surrounding the race were met with further violence when security forces tear gassed protestors. Much like 2011, protests surrounding the Formula 1 have been accompanied by street art and graffiti, now denouncing the continuation of the race in Bahrain and its complicity in Bahrain’s human rights abuses. Images of the F1 logo constructed of machine guns and the Bahrain flag, along with depictions of cars racing on the blood of protesters captioned “boycott Formula 1 in Bahrain” are among the more provocative pieces to come out of the ongoing Formula 1 protests. Despite clear vocal and visual opposition to the continuation of the race, Formula 1 continues to insist on holding its annual Grand Prix in Bahrain. 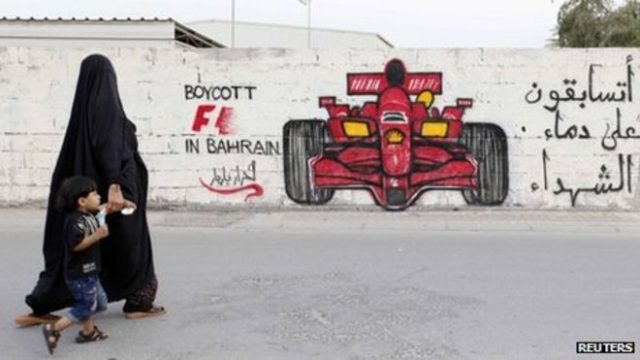 Protests, calls for reform, and street art regularly coincide in Bahrain. The 2011 movement that found its home in the Pearl Roundabout served as one chapter in a provocative history of visual resistance that has carried on through to the unrest around the annual Formula 1. The medium serves as a salient visual reminder of the ongoing repression of human rights in Bahrain at the hands of the government and the fight many Bahrainis have long been engaging in to exercise their fundamental freedoms.

Laura Neumayer is an Advocacy Fellow with ADHRB.