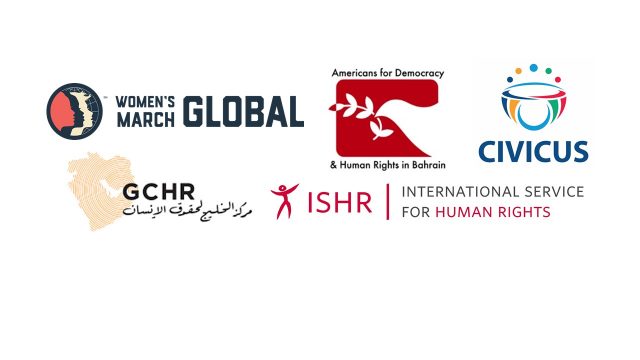 WORLD | 26 November 2018 – Since May 2018, at least a dozen women’s rights defenders have been arrested and subject to human rights violations for their activism in Saudi Arabia. Recent reports have emerged that some of the detained women activists have been subject to electrocution, flogging, sexual harassment and other forms of torture. Testimonies recount that this abuse has left some of the women unable to walk or stand properly with uncontrolled shaking and marks on their bodies. One of them has attempted suicide multiple times.

“Since May we have been advocating for the unconditional release of Saudi Women’s Rights Defenders – and to learn of the torture WHRDs are subject to fuels our work even further,” said Uma Mishra-Newbery, Director of Global Community from Women’s March Global.

A campaign launched by members of the Free Saudi Women Coalition – including Women’s March Global and Coalition partners, the Gulf Centre for Human Rights (GCHR), the International Service for Human Rights (ISHR), CIVICUS and Americans for Democracy & Human Rights in Bahrain (ADHRB) – has been advocating for the immediate and unconditional release of Saudi women human rights defenders. Over 240,000 signatures have been collected on Women’s March Global’s Change.org petition calling on the United Nations to hold Saudi Arabia accountable. Over 170 NGOs called on the UN to suspend Saudi Arabia from the UN Human Rights Council and to hold an inquiry into human rights abuses in the country.

“Among the women’s rights defenders jailed this year in Saudi Arabia are partners and friends. One young woman was kidnapped and brought to Saudi Arabia against her will – just as the authorities had planned with prominent journalist Jamal Khashoggi who was murdered in the Saudi Consulate in Istanbul in October,” said Khalid Ibrahim, GCHR Executive Director. “We can’t forget the brave women’s rights defenders who are at risk of torture and abuse in prison, and we fear greatly for their well-being.”

Notably, Saudi Arabia has silenced women human rights defenders for decades, and those recently arrested are not the only ones in prison, where other women are serving prison sentences or even facing execution for protesting. “Authorities continuously violate rights to peaceful assembly, curb the formation of independent civil society organisations, and restrict freedom of expression for Saudi activists” said Masana Ndinga-Kanga, MENA Advocacy Lead from CIVICUS. “The very women at the forefront of campaigning for the right to drive, which was recently granted, have been detained for their calls for an end to the male guardianship system over women.” Saudi Arabia is rated closed on the CIVICUS Monitor.

“Women human rights defenders in Saudi Arabia, in the absence of any independent NGOs, provide a vital lifeline of support for equality and protection from violence for women of their country who are left with blocked access, inadequate resources or ineffective protection from violence of all forms,” said a Saudi human rights defender who can’t be named in order to protect them.

The coalition partners have called for international action, including ending arms sales to Saudi Arabia, which is enabling the war in Yemen since 2015. Salma El Hosseiny,  ISHR’s Human Rights Council Advocate said that UN Human Rights Council members should call for a Special Session on the increasing internal repression by the Saudi authorities against human rights defenders, journalists and other peaceful critics. “Silence by the world’s top UN human rights body on these egregious violations would only embolden the Saudi authorities to escalate their internal repression, continue to torture defenders, with complete impunity”, said El Hosseiny.

“Action by the international community will put Saudi Arabia on notice not only that domestic repression is unacceptable, but that its actions in Yemen are unacceptable,” said Husain Abdulla, ADHRB Executive Director. “We call for accountability for those responsible, not only for the arrests of women’s rights defenders, but the millions facing famine in Yemen, and for the kingdom to meet its international treaty obligations.”

Women’s March Global, GCHR, ISHR, CIVICUS and ADHRB reiterate calls for Saudi Arabia to immediately release all human rights defenders, including women’s rights activists, and end the abuse and torture of women human rights defenders in prison. The Saudi claims that torture is not taking place in prison are not credible and the international community must act immediately to protect these detainees, especially the women who are reportedly being subjected to torture.