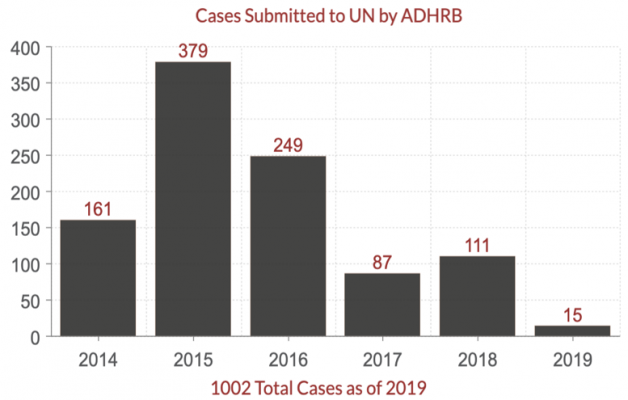 In October 2013, Americans for Democracy & Human Rights in Bahrain (ADHRB) began its United Nations (UN) Complaint Program to assist individuals suffering from human rights abuses in Bahrain and the broader Gulf region. ADHRB complains on behalf of victims to the Special Procedures offices of the UN, who then communicate with the offending government for an explanation regarding the allegations. As of April 2019, over 1,000 complaints have been submitted by ADHRB to the UN Special Procedures on behalf of Bahraini individuals subjected to rights violations. 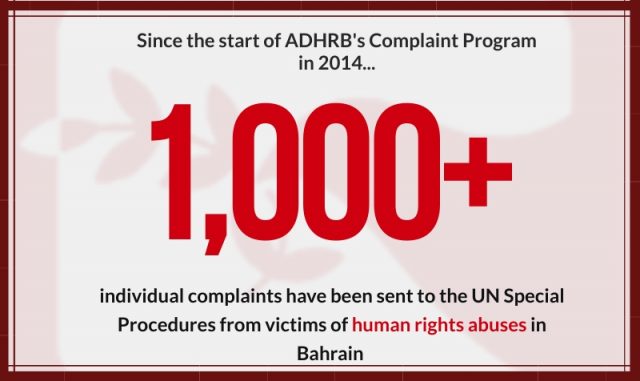 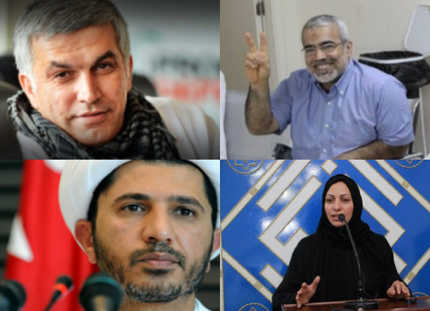 ADHRB has submitted complaints of behalf of thousands of Bahrainis, including high-profile individuals such as prominent human rights defender Nabeel Rajab, prisoner of conscience Dr. Abduljalil al-Singace, political leader Sheikh Ali Salman, and women human rights defender Ebtisam Al-Saegh.  All of their cases highlight Bahrain’s ill-treatment and arbitrary sentencing of activists and politicians in reprisal for their work. In addition, ADHRB has advocated and complained on behalf of many lesser-known Bahraini victims that have been tortured, denied due process, and subjected to inhumane prison conditions. Through ADHRB’s complaint program, 1002 Bahrainis have been represented and brought to the attention of the UN Special Procedures offices. 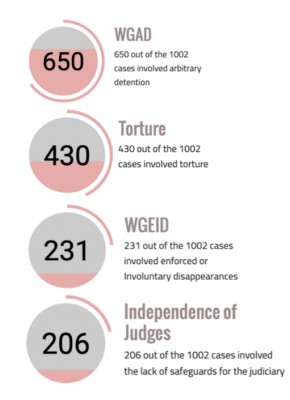 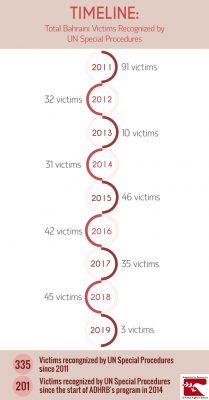 Once a complaint is received, Special Procedures submit information to the offending government, seeking an explanation regarding the allegations. Governments are asked to respond, but some choose not to. At the end of the process, the Procedures publish the allegations on the UN website and these are included in a Joint Communications Report ahead of the next Human Rights Council session. In addition, the Working Group on Arbitrary Detention (WGAD) may issue official Opinions regarding the status of detained individuals when applicable, and the Working Group on Enforced and Involuntary Disappearances (WGEID) can request the government to clarify and make known the whereabouts of a disappeared person.

Since 2011 the United Nations Special Procedures has sent 90 joint communications to Bahrain as of April 2019. These communications have recognized more than 330 individual victims. Cases have been highlighted by the following mandates: