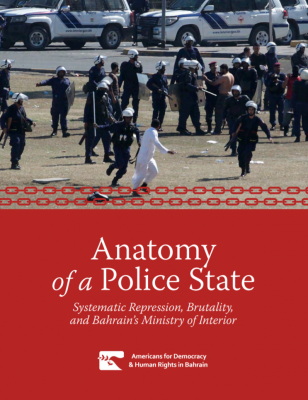 Americans for Democracy & Human Rights in Bahrain (ADHRB) is pleased to release Anatomy of a Police State: Systematic Repression, Brutality, and Bahrain’s Ministry of Interior, a comprehensive look at the core security agency driving Bahrain’s human rights crisis. See the introduction to the report below, and click here to read the full report.

A comprehensive look at the core security agency driving Bahrain’s human rights crisis, Anatomy of a Police State is the first full study of the Ministry of Interior (MOI) police force’s integral role in the kingdom’s repression of dissent. It reveals that the MOI has led Bahrain’s catastrophic devolution into a police state even as it has received millions of dollars from countries like the United States (US) and the United Kingdom (UK), presenting overwhelming evidence of widespread gross human rights violations perpetrated as a matter of government policy.

Drawing on years of primary documentation, Americans for Democracy & Human Rights in Bahrain (ADHRB) analyzes over 1,000 discrete incidents of abuse comprising more than 3,000 specific rights violations attributable to MOI agencies from 2011 through to the present day, from arbitrary detention and torture to rape and extrajudicial killing. The report demonstrates a clear pattern of police brutality and repression at every command level of the MOI, with the same types of violations perpetrated by the same units consistently over time.

Despite Bahraini government claims that misconduct is isolated to a few “bad apples,” our documentation proves that serious violations like torture are the product of de facto policy generated not just by a culture of impunity, but also by a system of incentives aimed at rewarding perpetrators. As the government has gradually tasked the MOI with enforcing new and more stringent prohibitions on fundamental freedoms, the most ruthless officers are distorted into the most effective officers – and they are promoted, not punished.

No amount of superficial reform, training, or international assistance will prevent abuse when law enforcement has become synonymous with repressing basic human rights. This is the reality of the modern Bahraini police state, and the kingdom’s partners must immediately suspend cooperation with all those responsible within the MOI. Moreover, with a view toward stemming the tide of abuse and compelling real accountability measures, we urgently call on the international community to impose sanctions on key perpetrators across all MOI agencies and command echelons, up to and including Interior Minister Sheikh Rashid bin Abdullah Al Khalifa.

Throughout this period of escalating repression, Bahrain’s chief western allies have consistently trained, funded, and equipped the MOI’s most brutal sub-agencies – with more than $13 million in support from the US and UK alone. Our report finds that: