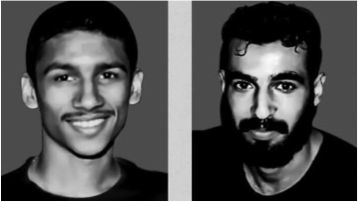 ***Updated: On 27 July 2019, the Government of Bahrain executed 25-year-old Ali AlArab and 24-year-old Ahmed AlMalali. Both individuals had been convicted and sentenced to death in a mass trial marred by allegations of torture and due process violations alongside 58 other individuals on 31 January 2018. A third individual from Bangladesh was also executed. Presently, there are eight other Bahrainis at imminent risk of execution, with ten other individuals on death row still undergoing appeals of their cases. 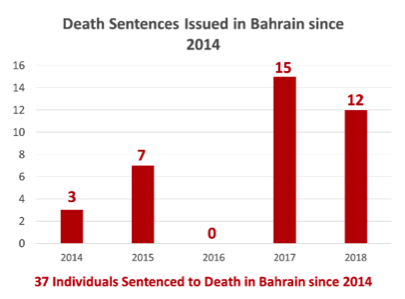 In January 2017, Bahrain’s Court of Cassation upheld the death sentences against Ali Al-Singace (21), Abbas Al-Samea (27), and Sami Mushaima (42). The men had been sentenced to death in an unfair trial in 2015. All three men were arbitrarily arrested, tortured to confess, and deprived of access to legal counsel. Despite this, the courts dismissed their lawyers’ arguments and refused to investigate their allegations of torture. They were executed less than a week after their sentences were upheld, with no prior notification given to the men or their families. They were the first people executed in Bahrain since July 2010 and the first Bahrainis executed since March 1996. 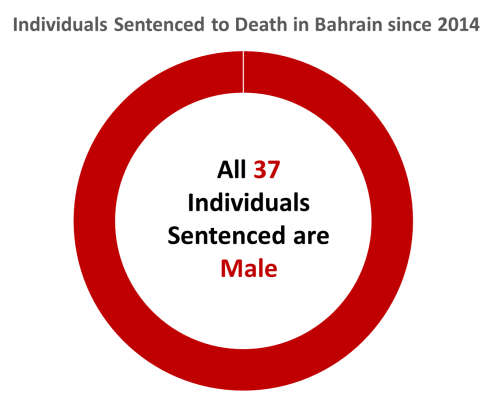 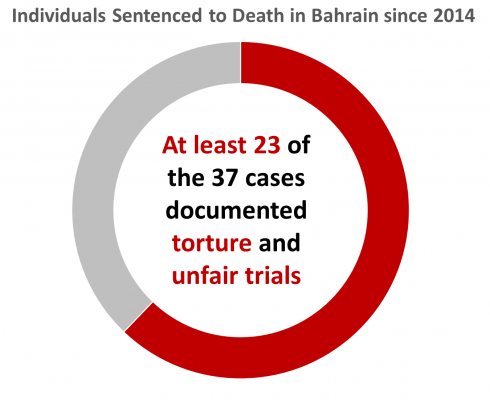 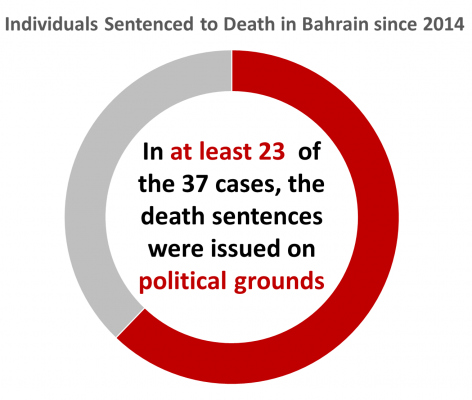 Mohammed Ramadan and Husain Ali Moosa, both currently at the appeals stage, were sentenced to death in 2014 and allege they were tortured to produce confessions. Both men were subjects of an urgent 4 February 2016 resolution from the European Parliament addressing their torture and death sentences.

Following the executions in January 2017, Bahrain has seen a dramatic increase in the issuance of death sentences. On 6 June 2017, the kingdom’s 4th High Criminal Court issued death sentences against Sayed Ahmed al-Abbar and Husain Ali Mohamed. Both men were tortured into signing prepared confessions and are currently at risk of imminent execution. Salman Isa Ali Salman and Husain Ebrahim Ali Husain Marzooq are also at imminent risk of execution. Additionally, six of the men sentenced to death in 2017 were sentenced in the first military trial of civilians following an April 2017 amendment to remove a constitutional prohibition on the practice. Their sentences were later commuted to life sentences.

On 29 January 2018, Bahrain’s Court of Cassation confirmed the death sentence against Maher Abbas al-Khabbaz. He was tortured in detention until he provided a confession. Husain Abdulla Marhoon Rashid and Moosa Abdulla Moosa Jaafar, who were tortured to provide a confession, had their death sentences confirmed by the court of appeals on 20 May and 3 June 2019 respectively and are at imminent risk of execution. Mohammad Radhi Abdulla Hassan, Ahmed Isa Ahmed Isa AlMalali, and Ali Mohamed Ali Mohamed Hakeem AlArab also had their death sentences confirmed by the Court of Cassation. Many of these cases involved torture in detention and AlMalali and AlArab were both sentenced in absentia. 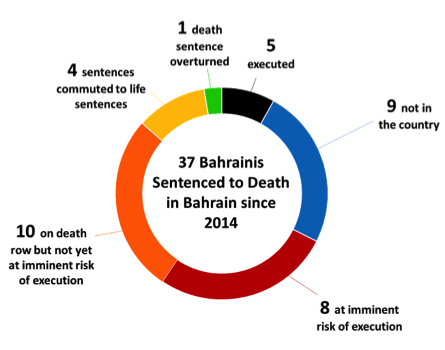 Bahrain’s use of capital punishment has caught the attention of the United Nations (UN). Due to the circumstances surrounding the January 2017 executions, the UN Special Rapporteur declared the executions to be extrajudicial in nature, highlighting the government’s use of “torture, unfair trial and flimsy evidence” in securing their convictions. The UN Office of the High Commissioner for Human Rights also released a statement expressing sincere concern for the individuals’ torture, unfair trial, and ultimate execution. Additionally, in December 2018 Special Procedures sent a communication on 20 of the individuals sentenced to death in Bahrain. In May 2019, UN experts called on Bahrain to halt the imminent executions of AlMalali and AlArab amid concerns they were coerced into making confessions through torture and did not receive a fair trial.

Bahrain’s National Institution for Human Rights (NIHR) is cited as the kingdom’s key monitoring institution on human rights. However, the NIHR functions as an extension of the government, as it lacks independence, and has even supported the execution of prisoners of conscience on multiple occasions.

April 2016 – A senior commissioner of the NIHR and member of Bahrain’s National Assembly, Khaled Al-Shaer, tweeted that Bahrainis who exercise their right to free speech and criticize the king “have committed a great treason against the nation and deserve the death penalty.”