On Tuesday 4 June, Americans for Democracy & Human Rights in Bahrain (ADHRB) organized an event at La Sapienza University in Rome. At the event, ADHRB and Amnesty International–Italy raised concerns about human rights violations in Bahrain, the Italy-Bahrain bilateral relationship, and Bahrain’s endowment of the King Hamad Chair for Interfaith Dialogue and Peaceful coexistance. The debate was heated, as the professor who holds the King Hamad Chair was in attendance. Professor Sonia Gentili of La Sapienza began the event with initial, opening remarks noting that she wrote an open letter to Bahrain calling for the removal of King Hamad’s name from the endowed position. Riccardo Noury of Amnesty—Italy also spoke, as did several representatives of ADHRB.

Riccardo Noury from Amnesty International—Italy descussed Amnesty’s work relating to Bahrain, highlighting the scale of human rights violations since the 2011 mass prodemocracy demostrations. In particular, he noted security personnel raiding schools and hospitals, the use of tear gas against demonstrators, and officials’ disproportionate use of violence agaisnt peaceful protesters. He addressed the government’s imprisoning of human rights activists on baseless charges like Tweeting, noting that Nabeel Rajab had his five-year prison sentence upheld on 31 December 2018 for tweeting and re-tweeting criticism of the government and its policies.

Noury also talked about the professorship, highlighting how the Bahraini government’s effort to name the chair is a cosmetic operation, calling it an “Infiltration” in the cultural field. He compared the government’s buying a named professorship to Saudi Arabia’s failed attempt to buy Teatro della Scala in Milan and expressed how he hopes that the professorship will be withdrawn.

Claudia Carnevale of ADHRB spoke about the diplomatic relationship between Italy and Bahrain. She discussed how the Italian embassy in Bahrain fails to meet the United Nations (UN) and European Union principles concerning human rights violations. She also spoke about Bahrain and Italy’s economic relationship, the importance of trade, and agreements between Italian industries and Bahrain government.

Yannick Cocard of ADHRB focused his remarks on the good relationship between La Sapienza and Bahrain, including the professorship. He highlighted how ADHRB and Amnesty are concerned about the ethical implications of La Sapienza receiving funds from Bahrain, rather than the decision-making process of the acceptance of the donation, which is legal. Nor are Amnesty and ADHRB addressing individuals in particular – like the professor who holds the King Hamad Chair – but they are highlighting concerns about the Chair and its symbolism. He recalled how Amnesty and ADHRB have separately sent two letters to the president of La Sapienza, whose reply has been unsatisfying. 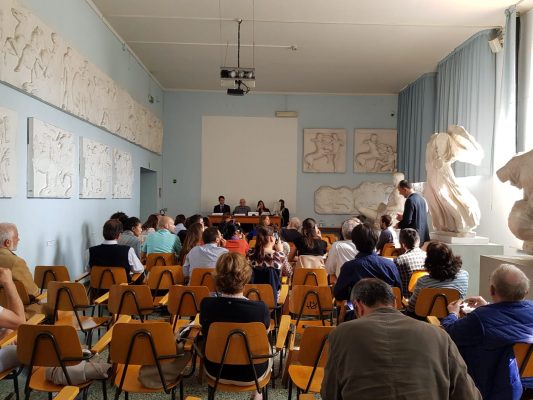 A number of questions echoed questions and concerns about the panel. One professor noted that while law and ethics are separated most of the time, even if something is legal, that does not mean that is right. As a result, the university must filter some sources of donations in order to meet ethical concerns. Angel Marasca, the President of ANPI (Rome Section), noted the issue of the professorship is a shame, as is the university president’s reply to letters addressing concerns about the chair, in which the president denied any political implication of this sponsorship. Marasca also spoke about the need for a law concerning the ethics of funds going to the educational system.

Alessandro Saggioro, who holds the professorship, spoke, noting that the decision on this professorship complies with all the rules – internal and national – and that all documents concerning the chair are public. He said that Bahrain’s funding of the chair can be seen as an opportunity and a challenge, and that in view of the importance of La Sapienza University, the university cannot stand back. Saggioro stated that it is normal for this professorship to be named after the king.

Saggioro also noted that Bahrain has introduced important and good principles in its constitution, how the government delivered an impressive speech defending human rights during one of the last UN General Assembly meetings. He believes that La Sapienza has to take this challenge because it concerns the future, in which regard we do not have any possibility of foreseeing. He ended his speech by describing the good initiatives the professorship is starting.