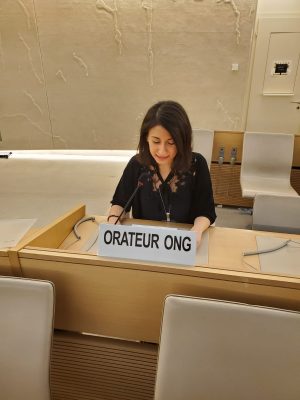 On 3 July 2019, within the 41st session of the UN Human Rights Council in Geneve, Americans for Democracy & Human Rights in Bahrain (ADHRB) made an oral statement during the Item 5 General Debate, drawing the Council’s attention to some of the abuses committed by the Bahraini government, demonstrating the state’s disregard to human rights during its candidacy in the Council. As such, ADHRB called on the Human Rights Council to Invoke GA Resolution 60/251 to Eject Bahrain from the Council.

Please click here for a PDF of the submitted statement and you can find it below, as well.

Bahrain was elected to the Human Rights Council in October 2018 on a blank slate. It has only been a matter of months since then, but already it has engaged in behavior that does not befit a member of the Council. ADHRB would like to draw the Council’s attention to only some of these abuses.

In November 2018, Bahrain attempted to secure the extradition of refugee Hakeem AlAraibi from Thailand by abusing INTERPOL’s Red Notice system. That same month, Bahrain held its parliamentary elections which were neither free nor fair, since most opposition societies were dissolved and their members banned from seeking office.

In January 2019, political prisoner Sheikh Ali Salman and human rights defender Nabeel Rajab had their sentences upheld. Convicted on spurious charges, Sheikh Salman will now spend the remainder of his life in Jau Prison, and Nabeel Rajab will be imprisoned until 2023.

In February 2019, Bahraini human rights defender Sayed Ahmed Alwadaei’s relatives had their sentences upheld in reprisal for his activism. That same month, Bahrain sentenced 167 people to prison for non-violently protesting in Duraz in 2017.

In April 2019, Bahrain convicted 139 individuals in a mass trial and stripped them of their citizenship. A month later Ali AlArab and Ahmed AlMalali had their final appeals rejected and their death sentences upheld.

Bahrain’s behavior since its election demonstrates its disregard for human rights, and constitute a rejection of the promises made during its candidacy. This Council must take action, invoke GA Resolution 60/251, and eject Bahrain from the Council.