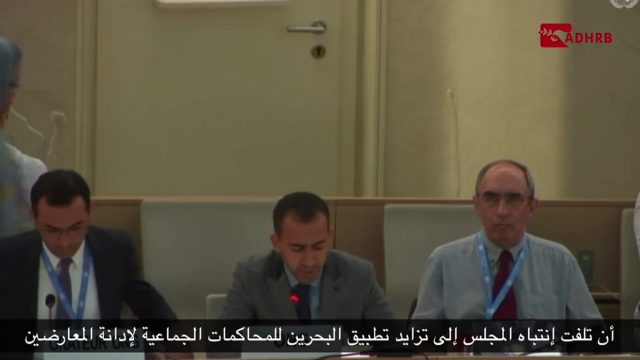 On 1 July 2019, within the 41st session of the UN Human Rights Council in Geneve, Americans for Democracy & Human Rights in Bahrain (ADHRB) made an oral statement during the Council’s Item 3 General Debate on Bahrain’s increasing implementation of mass trials to convict dissidents. And called on Bahrain to restore revoked nationalities, to annul all convictions from unfair trials, and to stop conducting mass trials.

Click here for a PDF of the submitted statement.

Please find the statement below.

Alsalam and ADHRB would like to bring the Council’s attention to Bahrain’s increasing implementation of mass trials to convict dissidents. In the past two years, the government held 5 mass trials, convicting 505 individuals.

In May 2018, Bahrain convicted 115 people on charges of participating in a group the government calls the “Zulfiqar Brigades.” Their citizenships were stripped. And the sentences were upheld today in the final appeal. Many defendants reported they were banned from attending court hearings, and some reported torture to coerce confessions.

In February 2019, 167 people were convicted in a mass trial for non-violent sit-ins in Duraz village. In May 2017, security attacked the non-violent protestors, killing 5 and arresting 286.

In April 2019, 139 people were denationalized for alleged participation in the group claimed by the government as the “Bahraini Hezbollah”. Thanks to international pressure, 551 individuals had their citizenship reinstated by royal order, yet, many of them remain imprisoned for life or on the death penalty.

We call on Bahrain to reinstate the citizenship of the remaining individuals, to annul all convictions from unfair trials, and to stop mass trials. We call on Members of this Council to urge the Bahraini authorities the same.