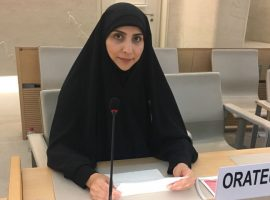 On 4 July 2019, during the 41st session of the UN Human Rights Council in Geneva, an oral statement was delivered in Arabic during Item 6 UPR Outcomes, drawing the Council’s attention to the Hadi government’s failure to ensure civilians’ human rights. Highlighting the government’s blatant disregard for civilian safety and protection amidst airstrikes, blockades, and famine, the statement calls upon the Human Rights Council to hold all parties of the conflict accountable to participate without delay in UN-led peace negotiations. Please continue reading below for the English translation.

We express dismay at the internationally recognized Hadi government’s dismal record when it comes to ensuring the protection of civilians in Yemen.

The Hadi government has called on a Coalition of states that have conducted airstrikes resulting in over 60000 casualties among the civilian population, a third of whom are women and children.  These airstrikes also caused near complete destruction of civilian infrastructure, including the education and health sectors. The Hadi government has stood by while the Coalition imposed a de facto blockade choking the civilian population’s lifelines that prevented necessary food, medicine, and fuel supplies from entering Yemen and spurred on the famine that has led to the death of over 200,000 children and the ongoing starvation of millions.  The Hadi government made a public promise that it would pay public sector salaries if it controlled the operations of the Central Bank of Yemen. The past 3 years have shown that it was just an empty promise that has resulted in the direct impoverishment of 7.5 million civilians.

What is it that can be expected of a government that flouts its human rights obligations in this manner?  A government that uses impoverishment and starvation as a weapon of war? Can we reasonably expect the Hadi government to put an end to the human rights abuses and crimes?  Can we reasonably expect the government to impartially and transparently investigate alleged violations of international humanitarian and human rights law by all parties to the conflict, make public the findings and ensure prosecution of those implicated in war crimes?  That would require independence, competency, and enforceability, all of which are lacking.

To address the human rights situation in Yemen properly the government and all parties involved must engage seriously in United Nations-mediated peace talks, recognizing that a comprehensive political solution is the most effective way to address the suffering of the Yemeni people.