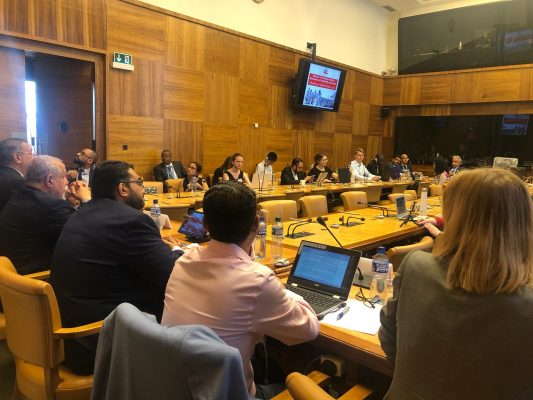 The panel was moderated by Husain Abdulla, Executive Director of ADHRB, and featured remarks by Dr. Saeed Shehabi, a veteran political activist with the Bahrain Freedom Movement; Dr. Jalal Fairooz, a former Bahraini Member of Parliament; and Abbas al-Morshed, a historian and cultural expert; and Margaret McIntyre, Advocacy Volunteer at ADHRB. 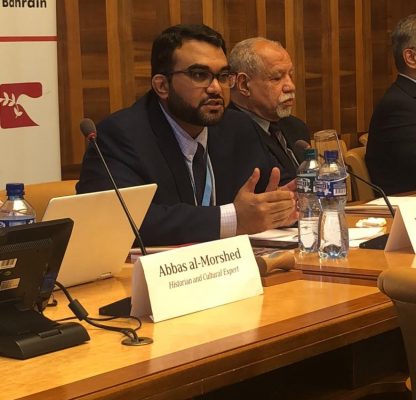 Husain Abdulla opened the panel by discussing repression broadly, including restrictions on civil society, criminalization of free expression, and the targeting of human rights activists. He noted that one thing that has lacked when we discuss Bahrain, however, is the voices from experts from Bahrain. To hear those voices from the ground, ADHRB invited Bahrainis who have years of experience in the political opposition, and who have extensive knowledge into the human rights situation from the ground. Notably, among our panelists are several Bahrainis who have had their citizenship revoked due to their activism. Even as we frequently discuss political repression and civil society, we must recognize that there has been a similar attack on Bahraini culture and society.

Dr. Shehabi, a member of the opposition for decades, began his remarks discussing the status of Bahrain’s opposition, noting its roots in opposition to British rule that ended in the mid-twentieth century. At the time, the aim of the opposition was to end colonialism. After the British withdrew, there was moderate hope that things would get better. This was especially true with the writing of a constitution and the holding of elections. The other main period of moderate hope was when Bahrain’s emir promised to “turn back the clock of repression and start a new era.” However, the hope that arose from creating a constitution was short-lived, as the government walked back its plans. 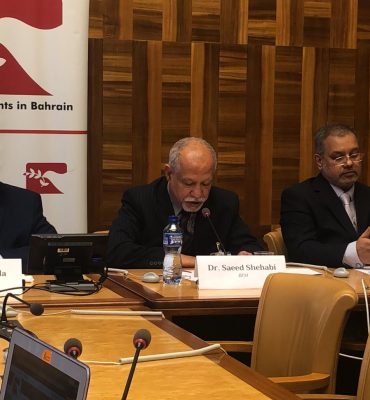 Dr. Shehabi noted that the monarchy “will not abide by any agreement with the people.” Between 1975 and 2000, there was a period of a “black era, one of the worst periods of the country when prisons were open, torture was abundant” and a British colonial officer, Ian Henderson, acted with impunity. Then in 2000 and 2001 there was moderate hope when the King offered amnesty and freed prisoners, offering also a binding document. From 2002 to 2011, Bahrain struggled to re-establish itself as a nation, seeking to build a national consensus to unite fragmented opinions. During this time, the government demonized the Bahraini people and began to grant citizenship to non-Bahrainis in an effort to change the demographics of the country. From his perspective, Dr. Shehabi expects to see a new popular movement to push for change, in spite of the agonies, because the current leadership in the Gulf is inhuman and brutal. 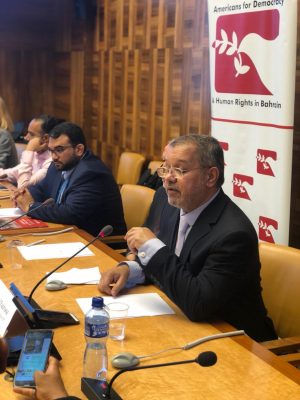 Dr. Fairooz, a former Member of Parliament with AlWefaq, started his remarks by discussing the deep repression in Bahrain, noting that there are about 5,000 political prisoners in Bahrain, a state with an approximate population of 600,000 citizens. The Prime Minister and the King, who have been in power for decades unelected, have overseen this repression and this mass jailing. All of the ministers are members of the ruling family, appointed because of their relationship to the king, rather than to popular will. This system is supported by the kingdom’s powerful allies, the United States and the United Kingdom. The ruling family owns a significant amount of private land, especially along the shore and the sea. Noting the level of repression and the steps the government will take to put the population in fear, Dr. Fairooz noted the case of journalist Karim Fakhrawi, who was arrested and tortured to death. Despite this repression, the Bahraini people feel that the Human Rights Council has not stood up for Bahrainis – rather the situation has gotten worse. Dr. Fairooz called on the Council to take stronger action and to appoint a Special Rapporteur for Bahrain. He stated that one barrier to this is that “money talks” louder than morality, noting that the United States’ President Trump declined to take stronger action to punish Saudi Arabia over Khashoggi’s murder, because he says that economics and business are more important.

Abbas al-Morshed noted that, while the political unrest in Bahrain is well-known, little is known of the unrest concerning cultural and historical identity in Bahrain. He noted that the conflict in Bahrain is the conflict between opposing identities – which must be addressed and resolved if there is any chance for political resolution. Al-Morshed noted the cultural identity of Bahrain, and noted specifically the government of Bahrain’s concealment of this heritage and the portrayal of this heritage as the “other.” He noted the historical importance of resistance in Bahrain, dating back as early as the 1920s. 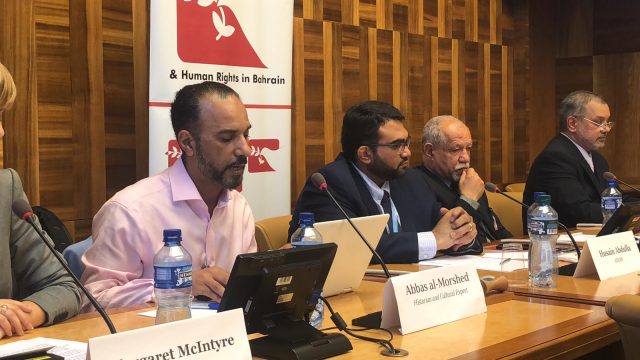 Al-Morshed noted that since the 2011 Arab Spring, pro-state media target Bahraini Shia for hate speech and ignore reporting on Shia news. He stated also that educational curricula and state-sponsored television does the same, ignoring or re-writing Shia history, and portraying them as “traitors.” Al-Morshed also mentioned the Bahraini National Museum, which excludes Shia history, and the role of the Department of Antiquities and Tourism in doing the same. Finally, al-Morshed concluded by stating that the official identity being promoted by the Bahraini government includes the creation of an external enemy, with the Bahraini Shia portrayed as the “other.” 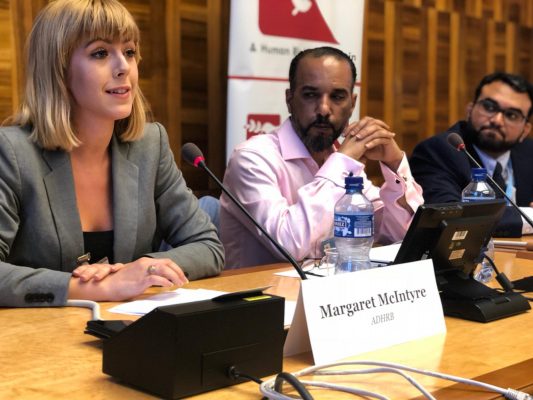 Margaret McIntyre provided concluding remarks to the panel, calling attention to the experience on the panel brought by Drs. Shehabi and Fairzooz, and al-Morshed. She highlighted that while all three are from Bahrain, they live in London, as they are unable to reside in Bahrain due to the repression. Bahrainis cannot come from the ground because of both formal and informal travel bans, and because there are no independent activists due to the government’s suppression of independent civil society, and restrictions on free expression, free assembly, and free association, with the fear of arrest, detention, torture, and a lengthy prison sentence if not capital punishment, the Bahraini government has effectively shut down, neutralized the opposition and activists.

McIntyre noted the detention and imprisonment of important leaders in the pro-democracy and political opposition movements: Dr. Abduljalil AlSingace, Hassan Mushaima, Abdulwahab Hussain, Abdulhadi AlKhawaja, as well as religious leaders Abdulhadi AlMukhoder, Mohamed Habib AlMiqdad, Abduljalil AlMiqdad, and dozens of others. She noted that the level of repression is a systematic encroachment by the government into the last remaining areas of freedoms for Bahrainis. The sentencing of Sheikh Ali Salman in 2015 – when he was the Secretary General of AlWefaq, the dissolution of AlWefaq and other political parties demonstrate the level of repression present in Bahrain. McIntyre noted that this level of repression manifests itself in the inability of activists to travel abroad for human rights purposes, in particular to this Council, due to reprisals and travel bans.

McIntyre and Abdulla thanked the panelists, and called on members of the Human Rights Council to take action on Bahrain. 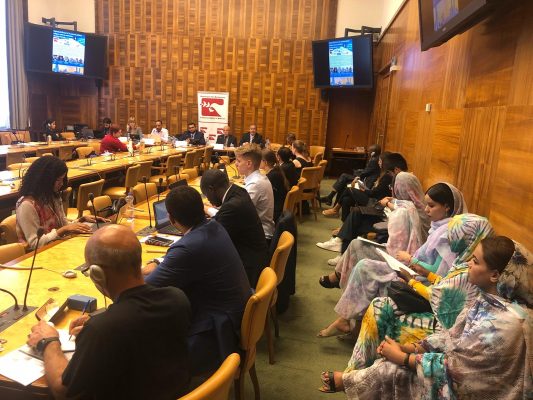