Extend Releases to Those at Special Risk of COVID-19

April 6, 2020- Amid the global threat posed by COVID-19, Bahraini authorities should release human rights defenders, opposition activists, journalists and all others imprisoned solely for peacefully exercising their rights to freedom of expression, assembly, and association, a coalition of 21 rights groups said today.

On March 17, 2020, Bahrain completed the release of 1,486 prisoners, 901 of whom received royal pardons on “humanitarian grounds.” The remaining 585 were given non-custodial sentences. While this is a positive step, the releases so far have excluded opposition leaders, activists, journalists and human rights defenders – many of whom are older and/or suffer from underlying medical conditions. Such prisoners are at high risk of serious illness if they contract COVID-19, and thus ought to be prioritized for release.

“Bahrain’s significant release of prisoners is certainly a welcome relief as concerns around the spread of COVID-19 continue to rise. Authorities must now speedily release those who never should have been in jail in the first place, namely all prisoners of conscience who remain detained solely for exercising their right to peaceful expression”, said Lynn Maalouf, Amnesty International’s Middle East director of research. “We also urge the authorities to step up measures to ensure full respect for the human rights of all those deprived of their liberty.”

Opposition leaders imprisoned for their roles in the 2011 protest movement remain behind bars. These include Hassan Mushaima, the head of the unlicensed opposition group Al-Haq; Abdulwahab Hussain, an opposition leader; Abdulhadi Al Khawaja, a prominent human rights defender; and Dr Abdel-Jalil al-Singace, the spokesman for Al-Haq.;

Other prominent opposition figures, including Sheikh Ali Salman, secretary general of the dissolved Al-Wefaq National Islamic Society (Al-Wefaq), also remain imprisoned. Sayed Nizar Alwadaei, who was deemed arbitrarily detained by the United Nations in “reprisal” for the activism of his brother-in-law, the exiled activist Sayed Ahmed Alwadaei; and human rights defenders Nabeel Rajab and Naji Fateel, have not been released either. Amnesty International considers them to be prisoners of conscience who should be released immediately and unconditionally.

The Bahrain Center for Human Rights has documented that a total of 394 detainees of the 1,486 released were imprisoned on political charges. According to Salam for Democracy and Human Rights, another Bahraini nongovernmental group, 57 of the 901 prisoners who received a royal pardon were imprisoned for their political activities, while the rest were given non-custodial sentences. Since the Bahraini government has not made available any information on the charges for which those ordered released had been convicted the exact figures cannot be verified. However, it is clear that people imprisoned for nonviolent political activity are in the minority of those released.

Scores of prisoners convicted following unfair trials under Bahrain’s overly broad counter-terrorism law have been overlooked and denied early release or alternative penalties, even though other inmates serving considerably longer sentences were freed. This includes Zakiya Al Barboori and Ali Al Hajee, according to the Bahrain Institute for Rights and Democracy (BIRD).

Conditions in Bahrain’s overcrowded prisons compound the risk of COVID-19 spreading. The lack of adequate sanitation led to a scabies outbreak in Jau Prison – Bahrain’s largest prison – and Dry Dock Detention Center in December 2019 and January 2020. Almost half of the Dry Dock Detention Center’s prison population was infected. In 2016 a governmental Prisoners and Detainees Rights Commission found buildings at Jau Prison to suffer from “bad hygiene,” “insect infestation” and “broken toilets.”

Furthermore, Amnesty International, Human Rights Watch, and the United Nations have expressed their concern over the authorities’ persistent  failure to provide adequate medical care in Bahrain’s prisons. This has endangered the health of some unjustly imprisoned persons with chronic medical conditions, such as Hassan Mushaima and Dr Abdel-Jalil al-Singace, who may now be at heightened risk of contracting COVID-19.

Hassan Mushaima, 72, has diabetes, gout, heart and prostate problems, and is also in remission for cancer. Prison authorities have routinely failed to take him to appointments due to his refusal to submit to wearing humiliating shackles during transfers to his appointments. International human rights mechanisms have said that the use of restraints on elderly or infirm prisoners who do not pose an escape risk can constitute ill-treatment.

Dr Abdel-Jalil al-Singace, 57, has post-polio syndrome and uses a wheelchair. Prison authorities have also refused to transport him to his medical appointments due to his refusal to wear shackles.

“As the world faces the unprecedented COVID-19 crisis, it is more important than ever that the international community work together to contain its spread and ensure that the health and rights of the vulnerable are protected,” said Husain Abdullah, executive director at ADHRB. “Bahrain’s allies, in particular the UK and US, should explicitly call on Bahrain to secure the release of all those solely imprisoned for their peaceful opposition to the government.”

States have an obligation to ensure medical care for all those in their custody at least equivalent to that available to the general population and must not deny or limit detainees equal access to preventive, curative or palliative health care. Given that conditions in detention centers pose a heightened public health risk to the spread of COVID-19, and the persistent failure to provide an adequate level of care to those in their custody,  there are grave concerns about whether prison authorities could effectively control the spread of COVID-19 and care for prisoners if there is an outbreak inside Bahrain’s prisons.

The Bahraini authorities should seize the opportunity to immediately and unconditionally release everyone imprisoned solely for peacefully exercising their rights to free expression, including Hassan Mushaima, Dr Abdel-Jalil al-Singace, Abdulahdi Al-Khawaja, Abdulwahab Hussain, Nabeel Rajab, Naji Fateel, and Sheikh Ali Salman. The convictions of those imprisoned following unfair trials – including Sayed Nizar Alwadaei – should be quashed, or at the very least they should be released pending fair re-trial.

The risks posed by the COVID-19 pandemic to those in detention should be a strong factor weighing toward the reduction of the prison population through the release of pre-trial detainees, particularly given the poor, unsanitary conditions in Bahrain’s prisons and the inadequate provision of medical care.  In addition, prisoners who are especially vulnerable to COVID-19, such as those with underlying medical conditions and the elderly, should be considered for early release, parole, or alternative non-custodial measures as a means to further reduce the prison population and prevent the spread of COVID-19.

In any event, the authorities should ensure that anyone who remains in custody has access to disease prevention and treatment services, including ensuring physical distancing of prisoners at all times, including in housing and eating and social areas. Prison authorities should screen all guards to prevent the introduction of COVID-19 into prisons and provide appropriate information on hygiene and supplies and ensure that all areas accessible to prisoners, prison staff, and visitors are disinfected regularly. They should develop plans for housing people exposed to or infected with the virus in quarantine or isolation and ensure that necessary medical care is available.

“Bahrain’s first wave of prison releases was positive, but insufficient,” said Joe Stork, deputy Middle East director at Human Rights Watch. “The authorities should further reduce the prison population by releasing those who are imprisoned solely for their political beliefs or for exercising their right to free speech and peaceful assembly.  Meanwhile, the authorities should ramp up efforts to ensure that the remaining prison population has access to the medical care, is protected from transmission and is provided the information that they need to combat the COVID-19 pandemic.” 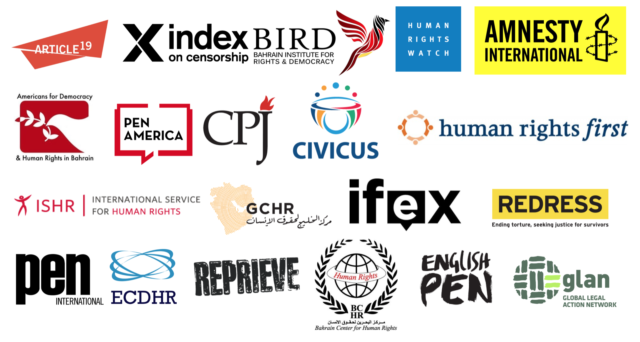