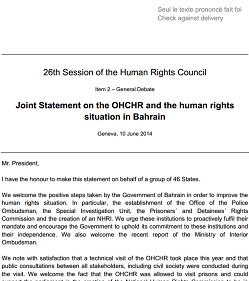 Geneva, Switzerland – 10 June 2014 – Americans for Democracy and Human Rights in Bahrain (ADHRB) praises the coalition of 47 United Nations (U.N.) Member States who joined in supporting a joint statement expressing serious concern over the human rights situation in Bahrain.  The statement –the fourth joint statement to come out of the U.N. Human[…]

END_OF_DOCUMENT_TOKEN_TO_BE_REPLACED 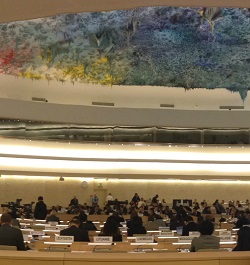 END_OF_DOCUMENT_TOKEN_TO_BE_REPLACED

WASHINGTON, DC – January 7, 2014 – On Tuesday, January 7, the Government of South Korea announced that it is indefinitely suspending all exports of tear gas to the Kingdom of Bahrain in response to repeated calls from advocacy and human rights groups.  Americans for Democracy and Human Rights in Bahrain (ADHRB) joined with other[…]