Americans for Democracy and Human Rights in Bahrain is pleased to announce the release of Slaving Away: Migrant Labor Exploitation and Human Trafficking in the Gulf. The following report will examine migrant labor in Bahrain, Qatar, and Saudi Arabia, documenting how the combination of poor working and living conditions of migrant workers, the consequences of the kafala system, and the limited efforts made by the governments to protect migrant workers has continued to leave them extremely vulnerable to exploitation and forced labor or sex trafficking. Adequately protecting migrant workers and holding offenders accountable will require the governments of Bahrain, Qatar, and Saudi Arabia to properly implement reforms that are currently in place, as well as to create new reforms that will address the social and legal discrimination that migrant workers face.

Please click here for a PDF of this report and continue reading for an executive summary and policy recommendations. 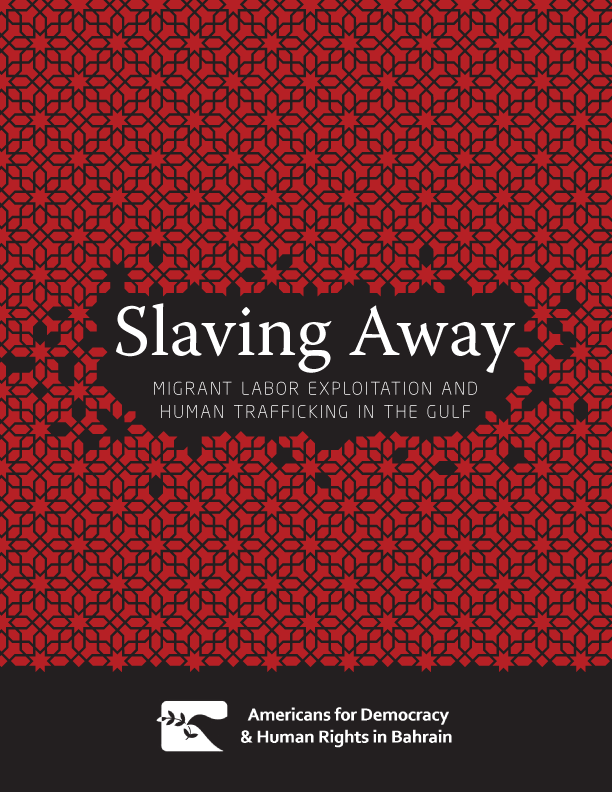 Since the creation of the modern metric for human rights standards, the Member States of the Gulf Cooperation Council (GCC) have habitually ranked near the bottom. Yet, while the human rights situation of domestic persons in Gulf countries is very rightfully highlighted by both the international community and domestic civil society in their respective countries, the plight of migrant or trafficked workers in the Gulf is often understated by those same actors. Slaving Away: Migrant Labor Exploitation and Human Trafficking in the Gulf aims to fill that gap, analyzing the situation of migrant workers and human trafficking in three key Gulf countries: Bahrain, Qatar, and Saudi Arabia. In so doing, it examines not only promises and commitments made by the countries as regards how they will tackle the enormous issues associated with migrants’ rights, but also measures the implementation of those promises. It is not enough for a country to pass a law protecting migrant workers or criminalizing human trafficking; that law must be enforced in order for those protections to mean something.

Central to this analysis is the issue of the kafala system, an oppressive employment system that quashes worker mobility by forcing migrant workers to continue their employment relationship with abusive employers. Ostensibly dismantled in Bahrain and with Qatar and Saudi Arabia having in the past made commitments towards at least weakening the system if not abolishing it completely, it is somewhat surprising that the kafala system continues to flourish in all three countries. In Qatar and Saudi Arabia, it is altogether illegal for an employee to seek alternative employment without first obtaining permission from his original employer, while in neighboring Bahrain a worker must wait a year before seeking permission from the government to relocate (a request that is routinely denied). This raises significant concerns, as under kafala it is impossible for a migrant worker domestic servant to find work elsewhere when her employer physically abuses her, as is it equally impossible for a migrant construction worker to find alternative work when his employer forces him to work 12 hours per day in 100 degree weather.

This is to say nothing of the litany of other abuses endemic for migrant workers in the Gulf. Promised a decent wage upon leaving their home country and hoping to send the extra back home, migrant workers often find themselves given wages at a less-than-subsistence level, or can even have their wages completely withheld for up to years at a time. Many migrant workers are forced into overcrowded and unsanitary labor camps lacking clean water or decent food. Oftentimes, young women are lured to Bahrain, Qatar, or Saudi Arabia with the promise of a well-paying domestic worker job for a good family, only to find themselves sold into sex slavery upon arrival. Runaways are labeled illegal, and can be detained for years or deported at their own expense as GCC governments effectively sponsor human rights violations.

Correcting these issues should be of paramount importance to the governments of Bahrain, Qatar, and Saudi Arabia, but so far efforts towards reform have been lackluster. The three countries have all individually legislated reform, but, as with so many other human rights commitments made by the three governments, progress towards implementation has been slow. With the plight of migrant workers in the Gulf now highlighted by the 2022 Qatar World Cup, however, migrant source countries as well as members the international community have a renewed opportunity to push for a better realization of the rights of migrant workers in these countries. This report aims to inform those actors.

ADHRB recommends the following for Bahrain, Qatar, Saudi Arabia; the international community; and citizens of the world:

To the Gulf Authorities:

To the Governments of Source Countries:

To the Government of the United States:

To the International Community: