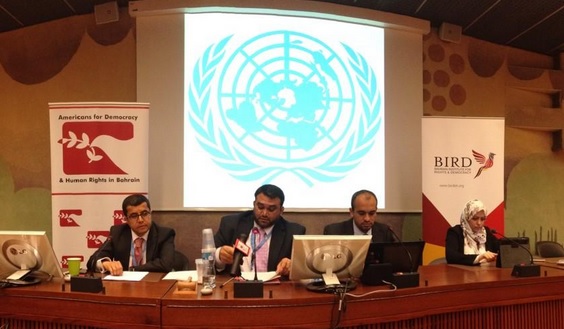 Husain Abdulla, ADHRB’s Executive Director, moderated the panel. Husain argued that Saudi Arabia, as a member of the Human Rights Council, should stand as an exemplar of human rights, but has thus far failed to do so. He noted that Saudi courts often use anti-terrorism laws to persecute human rights activists at the behest of the government and that the government stifles religious freedom without consequences. Furthermore, women continue to face significant discrimination. Abdulla concluded by stating that Saudi’s actions show that it is not committed to reform, but instead aggressively enforces the status quo.

Mrs. Samar Badawi, a human rights defender and activist in Saudi Arabia, agreed that defenders in the country are routinely accused of terrorism for their activism on behalf of human rights. “The oppression in the country has reached unprecedented levels,” Badawi said through a translator, noting that organizations around the world have documented severe human rights violations in Saudi Arabia. Badawi discussed the case of her husband, Waleed Abu al-Khair, who the government sentenced to 15 years in prison and a 15-year travel ban for advocating for human rights in the country. She urged the international community to intervene on behalf of the citizens of Saudi Arabia, stating that they, too, have the right to live in dignity.

Mr. Adam Coogle, a Middle-East researcher at Human Rights Watch, joined the conversation via Skype from Jordan. He noted that Saudi Arabia has “cracked down significantly” on human rights activists in the country, and that a “string of activists” had been imprisoned in the last year for asking the government to respect its human rights obligations. “The criminal justice system is a veneer for state oppression,” Coogle said, which uses confessions obtained through torture to garner convictions in Saudi courts. Coogle argued that the courts also use vague charges such as “breaking allegiance with the ruler” to convict human rights defenders, and that defenders often receive sentences harsher than those handed down to violent terrorists. “It’s odd, because you have a situation where Saudi Arabia, as a member of the Human Rights Council, has pledged to honor the highest standards of human rights,” said Coogle. As such, Coogle argued that Saudi Arabia’s membership makes a mockery of the body.

Dr. Hassan al-Amri, chairman of the New Bakkah Foundation, discussed the government’s practice of punishing human rights defenders for their activities. “The Government of Saudi Arabia has signed the Arab Charter of Human Rights,” stated al-Amri through a translator, “but serious concerns persist regarding the government’s treatment of human rights defenders in the country.” Detailing the activities of the general prosecutor belonging to the Ministry of Interior, al-Amri stated that the courts often prosecute defenders for “disobeying the ruler and God.” Criticism of government activities or judicial decisions is also a serious crime, as is cooperating with international human rights organizations. “What I’m doing now, sitting here among you and my colleagues and criticizing the government, is a crime in Saudi Arabia,” said Al-Amri.

Mr. Ali al-Dubisi, founder and executive director of the European Saudi Center for Human Rights, noted that Saudi government officials violating human rights operate with impunity. “There are no protections for human rights defenders,” said al-Dubisi through a translator. “The officials themselves do not recognize the problem, and often state that they have the most fair and efficient justice system in the world.” This, al-Dubisi argued, is a farce. Human rights defenders face continuous persecution in Saudi Arabia, with imprisoned defenders often requiring but not obtaining medical attention for injuries sustained at the hands of government officials. “The situation in Saudi Arabia is severe and urgent,” al-Dubisi said.