On 28 October 2014, a Bahraini court sentenced award winning photographer Ammar Abdulrasool to two years in prison. Americans for Democracy & Human Rights in Bahrain (ADHRB), the Bahrain Center for Human Rights (BCHR) and the Bahrain Institute for Rights and Democracy (BIRD) condemn the court’s decision and the ongoing prosecution and detention of photographers in Bahrain.

Abdulrasool was arrested and taken, handcuffed and blindfolded, to the Criminal Investigations Directorate (CID). While in detention, Abdulrasool was forced to stand for three days and denied the ability to pray. Security forces beat Abdulrasool, stripped him of his clothes, sexually harassed him, threatened him with electric shocks, and threatened to arrest his wife and infant daughter. Abdulrasool was subjected to enforced disappearance for seven days and was denied access to a lawyer. 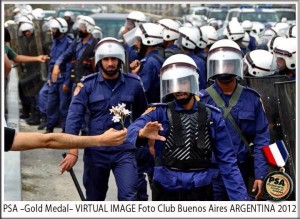 Government forces interrogated Abdulrasool regarding his work, placing emphasis on a photograph showing a peaceful protestor giving a police officer a flower (above). The photo was taken during the February 2011 demonstrations that took place in Bahrain and has been widely circulated and acclaimed since its publication, winning a number of international prizes.

The aforementioned organizations believe that the Bahraini government’s reprisals against photographers is a violation of covenants and international treaties that guarantee the right to freedom of expression, in particular Article 19 of the International Covenant on Civil and Political Rights, which states that “everyone has the right to freedom of expression; this right shall include freedom to seek, receive and impart information and ideas of all kinds, regardless of frontiers, either orally, in writing or in print, in the form of art, or through any other media of his choice.”

The aforementioned organizations calls on the government of Bahrain to ensure the following and call on the United States, the United Kingdom, the United Nations, and all other allies of the Bahrain government, and international institutions to put pressure on Bahrain to: