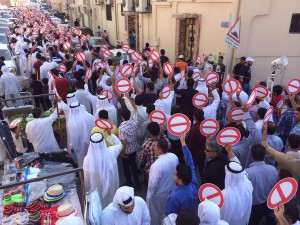 Earlier this month, Bahraini security forces attacked several peaceful protests against unfair parliamentary elections. Americans for Democracy & Human Rights in Bahrain (ADHRB), the Bahrain Center for Human Rights (BCHR) and the Bahrain Institute for Rights and Democracy (BIRD) express concern over such attacks and call on the Government of Bahrain to end its systematic violations of freedom of expression and freedom of assembly.

Please click here for a PDF of this document.

On 21 November 2014, political opposition parties announced a self-determination referendum asking Bahraini nationals to vote on the political system in the country. The symbolic gesture was held as a part of a broader boycott campaign against parliamentary elections in the country. Supporters of the referendum opened and operated approximately 44 voting centers the results from these voting centers were to be submitted to the United Nations. Coinciding with peaceful demonstrations, opposition groups submitted requests to the authorities to hold public gatherings. The government however denied these requests.

On 21 and 22 November 2014, security forces attacked peaceful protests calling for the boycott of parliamentary elections in several areas, including Duraz, Karzakan, Sanabis, AlDair, AlMaameer, and Sitra. In suppressing the protests, security forces employed tear gas and shotguns against unarmed protesters, and subjected at least 21 villages to indiscriminate and excessive use of tear gas. Eyewitnesses documented several injuries resulting from the use of shotguns against protesters in at least five villages. 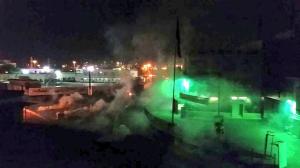 Government forces also raided several homes on 21 and 22 November, leading to the arrest of at least 31 individuals including children. Among those arrested was Mohamed Alrayash, who had previously been photographed voting in the public referendum. The Ministry of Interior said many of the arrests were related to “participating in an illegal gathering.” 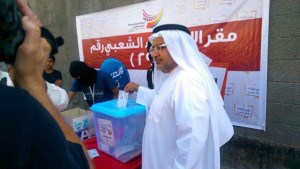 The Government of Bahrain utilized intimidating tactics to increase participation in the 22 November elections, sending letters to Bahrainis asking them to “respond to the call of duty” by participating in the elections. Some of the Bahrainis that received such letters were deceased, imprisoned, or forcibly denaturalized by the government. A  Report surfaced that the government would “review possible action against non-voters”, while priority in employment and public services would be granted to voters. 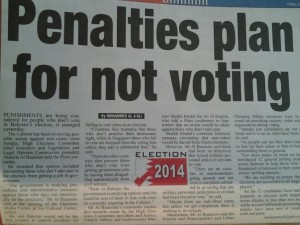 Meanwhile, local news agencies reported that some government institutions, including the Ministry of Interior, Ministry of Municipalities and the Bahrain Telecommunication Company, asked employees to provide proof that they participated in the elections. Many journalists were prevented from photographing election centers, while the Criminal Investigation Department ordered printing shops to refrain from printing any materials calling for the boycott of the elections. Existing legislation in Bahrain does not impose any reprisals against non-voters. 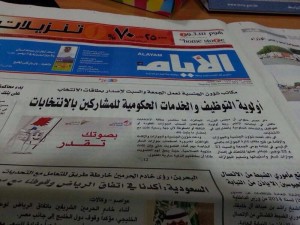 The aforementioned groups call on the Government of Bahrain to respect freedom of expression and assembly and immediately end all attacks on protests and other forms of peaceful expression. We also call on the immediate release of individuals held on charges related to their participation in the public referendum and the boycott of the election.