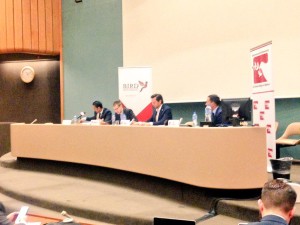 12 March 2015 – Americans for Democracy & Human Rights in Bahrain, in coordination with the Alsalam Foundation, the Bahrain Center for Human Rights, the Bahrain Institute for Rights and Democracy, CIVICUS, and UPR Info, hosted an event at the 28th Session of the Human Rights Council entitled, “Civil Society Documentation & Engagement with UN Mechanisms.”

Tor Hodenfield, the Policy and Advocacy Officer from CIVICUS, moderated the panel, opening by stating the importance of documenting human rights violations and engaging the United Nations. “In light of the unprecedented legal restrictions being brought upon civil society across the globe, it is increasingly important to identify innovative strategies to monitor and document human rights violations at the national level.”

Safir Syed from OHCHR’s Civil Society Office joined the panel to provide information on UN mechanisms, explain how OHCHR promotes civil society’s role in the international community, and show how OHCHR protects the space in which civil society operates. Hodenfield asked Syed how best civil society can use international avenues to engage with the Human Rights Council and OHCHR. “Everything that [NGOs are] doing, it’s going to carry on whatever the Human Rights Council or the UN does,” stated Syed, continuing by saying that promoting human dignity and inclusive participation should be a priority regardless of UN action. “In the UN Human Rights System,” he continued, “we have three methods to engage civil society: OHCHR, the treaty bodies, and intergovernmental bodies such as the Human Rights Council.” He also described the Special Procedure system, stating that the UN in this instance maintained about 60 entry points for civil society to engage by addressing individual human rights complaints. “All of these mechanisms rely on documentation,” said Syed. “It’s what feeds the system,” he continued, stating that these mechanisms cannot function without civil society providing them with useful information and reporting.

Hodenfield asked Syed to follow-up on documentation for countries that don’t have an OHCHR regional presence. “For national actors to share information with the system, we rely upon transmissions through email, electronically, or through the post in places where we don’t have national offices. This is the best way to reach us.”

Sayed Yusuf al-Muhafdah, Vice-President of the Bahrain Center for Human Rights, continued the conversation. Hodenfield asked al-Muhafdah to provide the context of documenting human rights abuses. “We’re in a very critical situation for human rights in Bahrain,” said al-Muhafdah. “There are 3,500 prisoners of conscience in Bahrain, and Bahrain arrests the highest number of journalists per capita in the world.” He emphasized that there is no space for civil society to work without fear of reprisal, framing that his work in documenting human rights abuses is always impacted by the possibility of government retaliation. “Most of the human rights NGOs aren’t even allowed to be registered in the country. BCHR had its organizational status revoked by the government and had to incorporate in Copenhagen, while ADHRB operates in Washington.”

Hodenfeld followed up by stating that, despite these issues, Bahraini civil society has managed to continue a robust documentation structure, and asking al-Muhafdah how that was possible. “It’s certainly not easy,” said al-Muhafdah. “We have a number of volunteers working for us, and on a daily basis they’re interviewing victims, taking informative photos, taking videos… They know the potential consequences, but they’re brave enough to face them.” He went on to emphasize the importance of informed consent, stating that victims of human rights abuses who have already experienced retaliation are often intimidated against cooperation with documentation teams. “We always get permission from victims and family members to publish their information. That’s extremely important.” He went on to speak about engagement with UN mechanisms. “BCHR and ADHRB have a team on the ground that helps us get information from victims, and we take that information, process it, and submit it in the form of a complaint to the Special Procedures. It’s a great way to get our documentation in front of UN experts… We also engage in public advocacy, by publishing victims’ stories and pictures online.

Hodenfield asked al-Muhafdah a second question regarding how best civil society can coordinate in situations such as that present in Bahrain. “We coordinate via email, via Whatsapp. But we know they’re spying on us, so we also use a lot of anonymous social media to coordinate.

Roland Chauville, the Executive Director of UPR Info, spoke on the UN mechanism known as the Universal Periodic Review (UPR). Hodenfield asked Chauville to provide information regarding the UPR’s entry points, and how best civil society can use the UPR to enhance its advocacy. “The best way for NGOs to engage the UPR process is to directly lobby State missions in Geneva,” said Chauville, explaining that the UPR process allowed human rights-observing states to make periodic comments and recommendations on the human rights situation in abusing countries. “NGOs can also submit mid-term reports,” he said, highlighting ADHRB’s mid-term report as an example of an excellent tool for keeping the spotlight on a country’s poor human rights record. “In other countries, we’ve actually seen the UPR bring NGOs and governments together,” he continued, stating that the UPR can even push governments to honor their human rights commitments when a government is willing.

Hodenfield followed up by asking Chauville to discuss what steps NGOs can take to advocate for the implementation of UPR recommendations. “The first thing is to make the UPR known in the country,” Chauville stated, describing that governments are often ignorant of the UPR outside of their foreign affairs ministries and departments. “Documentation is also essential,” he continued, saying that it is necessary for the UN to receive information regarding implementation in order to engage in further action.

Hodenfield then opened up the floor for questions. Michael Payne from ADHRB asked that, with the Third Cycle of the UPR approaching, what changes Chauville anticipated for the process. He also asked what role parliamentarians could play. “We’ll need to first see how governments respond to the second cycle… I feel there’s an effort to be made to incorporate the second cycle into the third.” Regarding the role of parliamentarians, Chauvulle said, “They must inform themselves. There needs to be communication between parliaments and NGOs to come to a consensus on what the situation actually is.” He added that parliamentarians have a responsibility to ratify international human rights treaties and conventions.

James Suzano from ADHRB asked a question regarding treaty bodies, querying Syed about how best civil society can engage treaty bodies when countries haven’t ratified the optional protocols or even the treaties. “It’s difficult to engage the treaty bodies when a treaty hasn’t been ratified,” said Syed. “However, oftentimes the same kind of content can be brought to other treaties that have been ratified. For example, if ICCPR [International Convention on Civil and Political Rights] hasn’t been ratified, but the CRC [Convention on the Rights of the Child] has, perhaps bringing information under the second body might be a solution.”

Fatema al-Mutawa, a lawyer from Bahrain, asked a question about whether al-Muhafdah had ever seen retaliation against victims for cooperating with his documentation team. “Yes, we have seen this in Bahrain, and it does have a negative effect on the documentation process.”

Mohamed al-Tajer, a Bahraini human rights lawyer, questioned the panel as to how the UPR mechanism can be effective when States themselves refuse to implement the recommendations. Syed defended the system, stating that the progress is debatable but that, “it’s really about being better at communicating ideas and countering misinformation.” Chauville also responded, stating that States created the rules and States have to obey them.

Ahmed Ali from BIRD asked Syed about reprisals, asking him how OHCHR might react against government action against human rights defenders. “The work you’re all doing takes a long time. It’s slow and sometimes dangerous… States, when they run out of ideas, will use violence and force.” He added that OHCHR can help minimize risk, but can’t stop them entirely. “OHCHR has adopted a policy of protecting human rights defenders… the High Commissioner speaks out, the treaty bodies speak out…” continued Syed, stating that OHCHR does what it can but again emphasizing OHCHR requires documentation in order to do so.

Michael Payne added an additional question to Syed, querying him on how civil society mechanisms without UN accreditation can engage OHCHR, and asked Chauville about seeing progress on recommendations that were not implemented in previous cycles. “The UPR can target anything,” said Chauville. “Repetition shows systemic problems.” Syed addressed the question of ECOSOC status, saying, “All it is is a ticket to get into this building [Palais des Nations]. The rest of the system does not require it.”

Hodenfield then closed by asking the panelists to describe concrete steps that civil society can take. Syed echoed his previous remarks, stating that change is difficult but important. “In order to use the UN, you need to be informed of its language, its structure, and how it works,” Syed continued. “For Bahrain in particular,” said al-Muhafdah, “we need to continue to pressure the government to let the Special Rapporteur into the country.” Chauville closed by stating that NGOs need to understand how the UN works and invest in its mechanisms.