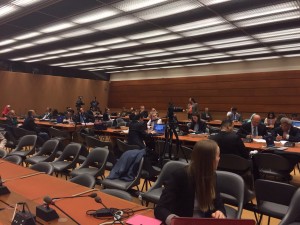 Husain Abdulla, the Executive Director of ADHRB, opened the panel by explaining that the idea of a Shia genocide is a popular but hyperbolic sentiment in Bahrain. He continued by stating that, while genocide does not apply in Bahrain, the situation in the country closely approaches that of another crime against humanity – that of apartheid. He then introduced the event’s esteemed panelists, allowing them to continue the argument.

Saman Naquvi, the grassroots advocacy associate for ADHRB, presented ADHRB’s report. “The Bahrain government is guilty of systemic discrimination against the majority Shia population,” said Saman Naquvi, continuing by stating that sectarianism does not exist in Bahrain except insofar as the government commits sectarian acts. “Our report covers state violence against Shia, the disclusion of Shia from the political process, and direct attacks against the Shia religious establishment, literally setting the Shia discrimination apart in their own land… Were the Shia considered a race instead of a religion, their situation would almost directly mirror the Apartheid Convention.”

Nabeel Rajab, a prominent human rights defender in Bahrain, joined the panel via Skype, as he could not travel to Bahrain on account of a travel ban imposed upon him in retaliation against a tweet he authored in which he criticized the government. “It’s not considered to be a crime here,” said Rajab, speaking about government violence committed against Shia. “The village in which I live is surrounded by government troops. It is tear gassed on a nightly basis, and government violence occurs daily. Yet if I wanted to move, I would have to receive government permission to leave the violence.” Rajab continued by emphasizing that the Sunni population is not implicated in the discrimination, and that the Shia and Sunni live in harmony in the country. “It is the system that is the problem,” explained Rajab. “We have an apartheid system here in Bahrain… If the government were to change its apartheid-like policies, violence against the Shia would disappear overnight.”

Fatima al-Mutawa, a Bahraini human rights and criminal defense lawyer, spoke about her personal experience as a legal practitioner in Bahrain. “We often can’t even find the defendants,” said al-Mutawa, stating that the government often disappears victims and interrogates them without notifying or allowing them to retain counsel. “When they’re in the trial, we can see the prejudice against our Shia defendants… the way the judge speaks to them, the way that the police handle them, it all reveals systemic prejudice in the government.” Al-Mutawa continued by stating that the government often does not even accept legitimate evidence of innocence. “In one trial, we submitted a video showing that the Shia defendant was playing in a basketball match at the time of the crime. The government still found him guilty, without explaining how he could be in two places at one time.”

Josh Colangelo-Bryan, a U.S. attorney specializing in human rights, continued the conversation. “In 2012, the King of Bahrain accepted the findings of the Bahrain Independent Commission of Inquiry and promised that political trials would stop. Based on the government’s own words, however, it’s indisputable that they haven’t.” Colangelo-Bryan went on to describe a case in which the court ruled against Shia defendants, quoting that the court’s reasoning included that “the goal of changing a monarchical system is itself illegal.” “If you ask for democracy in Bahrain, you are a criminal,” concluded Colangelo-Bryan.

Mohammed al-Tajer, a human rights lawyer and the President of the Bahrain Human Rights Observatory, concluded the panelists’ remarks. “I remember maybe 15 years back, when the new King Hamad began his reform projects… As a Shia, I was hopeful for a true democracy in Bahrain… but that hope no longer exists today.” He argued that the entire system is balanced against the Shia. “In the last few years, I haven’t seen more than one or two Shia become public prosecutors, and there are only seven Shia judges in Bahrain. The government needs to incorporate Shia into its structure in order to truly represent all of Bahraini society.”