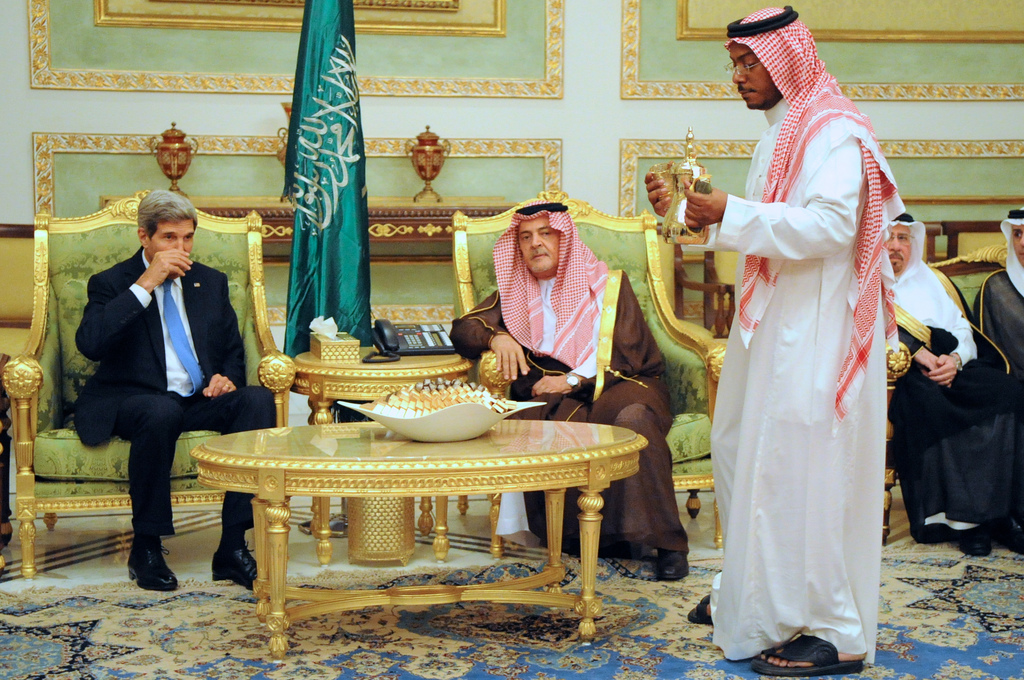 Secretary of State John Kerry has certainly earned the right to speak before the Human Rights Council (HRC) in Geneva, Switzerland. As a US Senator and now Secretary of State, he has promoted human rights and the expansion of freedom in authoritarian nations. Therefore, when Secretary Kerry remarks, “When people in every corner of the globe are denied the rights that they deserve, the HRC must live up to the standards upon which it was created,” it sends a strong and clear message about the resolve the US intends to exercise in its duties as a member of the HRC.  When he touched down in the Saudi capital on Thursday – less than three days after delivering this statement – he and the administration he represents sent another message – one that is weak, muddled and conflicting with the first.

After celebrating the “courage and commitment” of each generation of American citizens in pushing the US to “live up to its founding ideals”, he met with a Saudi government that works to prevent its citizens from engaging in a similar process. After recognising the “moral standard that summons” all participating member nations to the Council, he embraced a government which has exempted itself from this standard time and time again. By failing to include needed human rights reforms alongside grave discussions about the Iranian nuclear programme and the threat of the Islamic State (IS), Kerry unwittingly contradicted the US message to Geneva.

Of course, the government for which he speaks does not intend to send mixed messages. Rather, Kerry succumbs to the same ailment that has struck so many human rights-conscious diplomats and politicians attempting to manoeuvre within the US-Saudi alliance. In order to maintain the status quo vis-à-vis Riyadh, US policymakers at all levels wrestle with diplomatic cognitive dissonance. The conflict between the values espoused by Kerry in his HRC speech and the reforms that he did not include in his Riyadh itinerary is a clear source of tension within US policy circles.

In Geneva, Secretary Kerry said that “activists, journalists, community organisers, [and] critical thinkers” can combat the spread of violent ideologies by “showing people a way to express hopes and grievances peacefully”. In Riyadh, he attended to a government that has sought to quash any trace of a critical civil society. Almost all the founding members of the Saudi Association for Civil and Political Rights, reformers calling for expanded freedoms and a transition to a constitutional monarchy, have been arrested and imprisoned. Human rights lawyer Waleed Abu al-Khair, who founded the Monitor for Human Rights in Saudi Arabia, is serving a 15-year prison sentence. Political organisation is forbidden. Tweets can lead to charges of treason.

In Geneva, Kerry also said, “Violent extremists have made it clear that not only do they have zero regard for human rights, they have zero regard for human life, period.” In Riyadh, he visited the ranch of a monarch who, for decades, involved himself in overt and covert Saudi efforts to fund the radical groups that served as the forerunners of IS and al-Qaeda. Standing beside his Saudi counterpart on Thursday, Kerry talked about disrupting extremist militants in Syria and related terror networks. It may have been discomfiting to acknowledge that many of the officials with whom he met in Riyadh were complicit in the spread of the ideology behind these networks.

When feelings of cognitive dissonance arise, people often work to rid the tension by bringing their beliefs more in line with their actions. Attempts to rationalise American diplomacy extend all the way to the office of the presidency. In January, when President Obama received criticism for meeting directly with King Salman after speaking strongly on the state of women’s rights in India, he said: “Sometimes, we need to balance our need to speak to them about human rights issues with immediate concerns we have in terms of counter-terrorism or dealing with regional stability.”

While the above serves as an easy explanation for inconsistent behaviour, it cannot replace the hard work that will secure long-term peace and security for all parties. Reshaping the alliance with the Saudi government is a difficult task, but one that – if undertaken – would fundamentally improve both counter-terrorism capabilities as well as regional stability. US officials can press for human rights reforms alongside weapons shipments. They can publicly advocate for the release of political prisoners. They can demand an end to a guardianship system that turns women into second-class citizens. They can soberly address the Saudi government’s role in exacerbating regional conflict, instead of treating it as an element of a bygone era. They can, simply, act upon the sincerity evident in Kerry’s remarks to the HRC.

During a joint press conference with Saudi Foreign Minister Saud al-Faisal, Kerry stated that the United States “will remain as resolved as ever to pursue what we believe is in the interests of our country and with respect to universal rights and values”. Such a declaration does not also have to be a contradiction.

The administration can start righting this dissonance, instead of rationalising it away. It would do Secretary Kerry well to remember his commendable record in pushing for justice at home and abroad. In 1971, as a young man and a veteran, he sat before the Senate Foreign Relations Committee in the wake of the Vietnam War and pointedly asked: “Where are the leaders of our country?” He should add to the legacy he has built and fight to give Saudi men and women the freedom to publicly ask the same kinds of questions.

This article was originally published by The Middle East Eye.