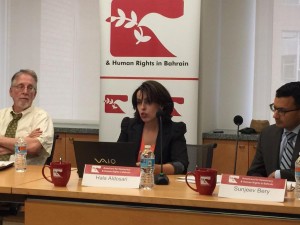 Joe Stork introduced the panel by commenting on the need for reform in Saudi Arabia and mentioning that Human Rights Watch engages in substantial advocacy work on human rights in Saudi Arabia.

James Suzano began by explaining the purpose of ADHRB’s advocacy work on Saudi Arabia. He said that ADHRB’s approach to advocacy in all GCC countries is not dissimilar to the approach of the Gulf governments, which mimic each other’s tactics and prosecute human rights defenders across borders. Mr. Suzano then explained that, over ten years ago, the UN Special Rapporteur on the independence of judges and lawyers visited Saudi Arabia to observe its new judicial system, providing recommendations to improve judicial independence. Later, ADHRB produced a follow-up report to assess the Saudi government’s implementation of the recommendations. The ADHRB report found that the recommendations had largely gone unheeded. Mr. Suzano went on to describe three main issues in the Saudi criminal justice system: judicial independence, the status of women, and the Anti-Terror Law. With regard to judicial independence, the report emphasized the need to separate the judges’ service to the law from their service to the king. Currently, the king has absolute control over the legal system, directly appointing and dismissing judges. Second, with regard to the status of women in the legal system, Saudi Arabia has no female judges. Although Saudi Arabia did lift the ban on women serving as judges, the king has not appointed any women to the position of judge. Finally, Mr. Suzano emphasized that the Anti-Terror Law substantially overreaches its stated subject. For example, the law makes it a crime to harm any interest of the Saudi state, which is read to apply to anyone advocating for reform. The Saudi government has refused to incorporate any human rights in its rules of criminal procedure. 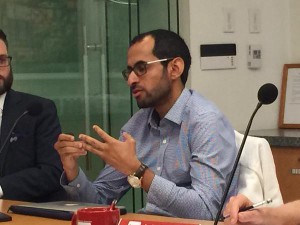 Abdulaziz Alhussan began by explaining that, in order to understand reform in Saudi Arabia, we have to understand the judicial and legal systems. New laws are not the solution; the solution is much deeper. Though Saudi Arabia has three branches of government, they differ from the branches in the United States. The first branch is the executive branch, headed by the King and his Council of Ministers. Second is the legislative branch, composed of the Shura Council, which does not have any actual legislative authority. The Shura Council has the right to suggest new laws, but the suggestions do not mandate legal action. Council members often fear to speak out about political issues. The third branch is the judiciary, which is nominally independent under the Basic Law. In practice, however, the king has ultimate authority over the judiciary. He has the right to appoint members in each of the three branches and the right to veto any law. The government recently established the Specialized Criminal Court (SCC) in response to the short sentences being handed down to suspected terrorists. Within the SCC, detainees have no rights. Mr. Alhussan explained that this is why he stopped trying to work within the SCC.

Hala Aldosari spoke on the way that the criminal justice system discriminates against women, and began by emphasizing that the law is fluid in Saudi Arabia. She spoke about a specific victim, “Amal,” that wished to remain anonymous. Amal was forced to enter into several marriages, all ending in divorce. She was placed in temporary shelters and finally in the custody of her brothers. There is no codified law governing divorce cases in Saudi Arabia, and decisions related to housing and other expenses are never enforced. The Saudi cables released by WikiLeaks revealed that another woman was arrested by the Emirati police for the crime of marrying outside Saudi Arabia against the wishes of her guardians. These cases highlight the restrictions on women in Saudi Arabia. Most of the women under the protection of the social services are placed in locations known to their families and abusers, affording little actual protection. A woman cannot be alone as a legal entity in Saudi Arabia. Ms. Aldosari further explained the conditions for women in prison. Within the prisons, there is overcrowding and delayed processing of non-Saudi inmates. Access to medical services is limited, and emergency service can be completely unavailable outside of normal working hours. Upon release from prison, women are forcibly handed over to their guardians. Most places of employment require permission from a woman’s guardian, and there are limited opportunities for women to travel.  Laws that have been passed to remedy these situations have not been implemented. Women are treated as perpetual minors. Ms. Aldosari finished my stating that the Saudi government should remove the guardianship system.

Sunjeev Bery began by discussing a 2014 Amnesty International report that documented the Saudi government’s crackdown on the Saudi Arabian Civil and Political Rights Association (ACPRA). ACPRA was formed by a group of human rights defenders in Saudi Arabia. They sought to ground their activism in Islamic principles, different from the approach of many other NGOs. ACPRA members encountered a heavy crackdown, and many now face lengthy prison sentences. Their crimes include disobeying the ruler and breaking allegiance with the ruler, which highlights the total authority given to the king. Mr. Bery then discussed what is next for human rights activists. He explained that it is important to remember that many of our governments are closely allied with the Saudi government. Despite Saudi Arabia’s crackdowns on human rights, there are signs that the government is sensitive about its international reputation and responds to international pressure. Clearly, the White House counts Saudi Arabia as an ally. However, there are examples of significant backlash within Congress to the close alliance with Saudi Arabia. Mr. Bery mentioned one occasion in March 2014 when 70 bipartisan members of Congress sent a letter to President Obama urging him to prioritize issues of human rights in Saudi Arabia. Additionally, following King Abdullah’s death, 67 members of congress sent a letter to his successor, Salman, critiquing the government’s restrictions on civil, political, and women’s rights. Mr. Bery closed by stating that the human rights community should identify members of Congress who would be receptive to raising Saudi issues, and determine what would be beneficial for the Saudi government to hear from the international community by speaking with activists within Saudi Arabia.