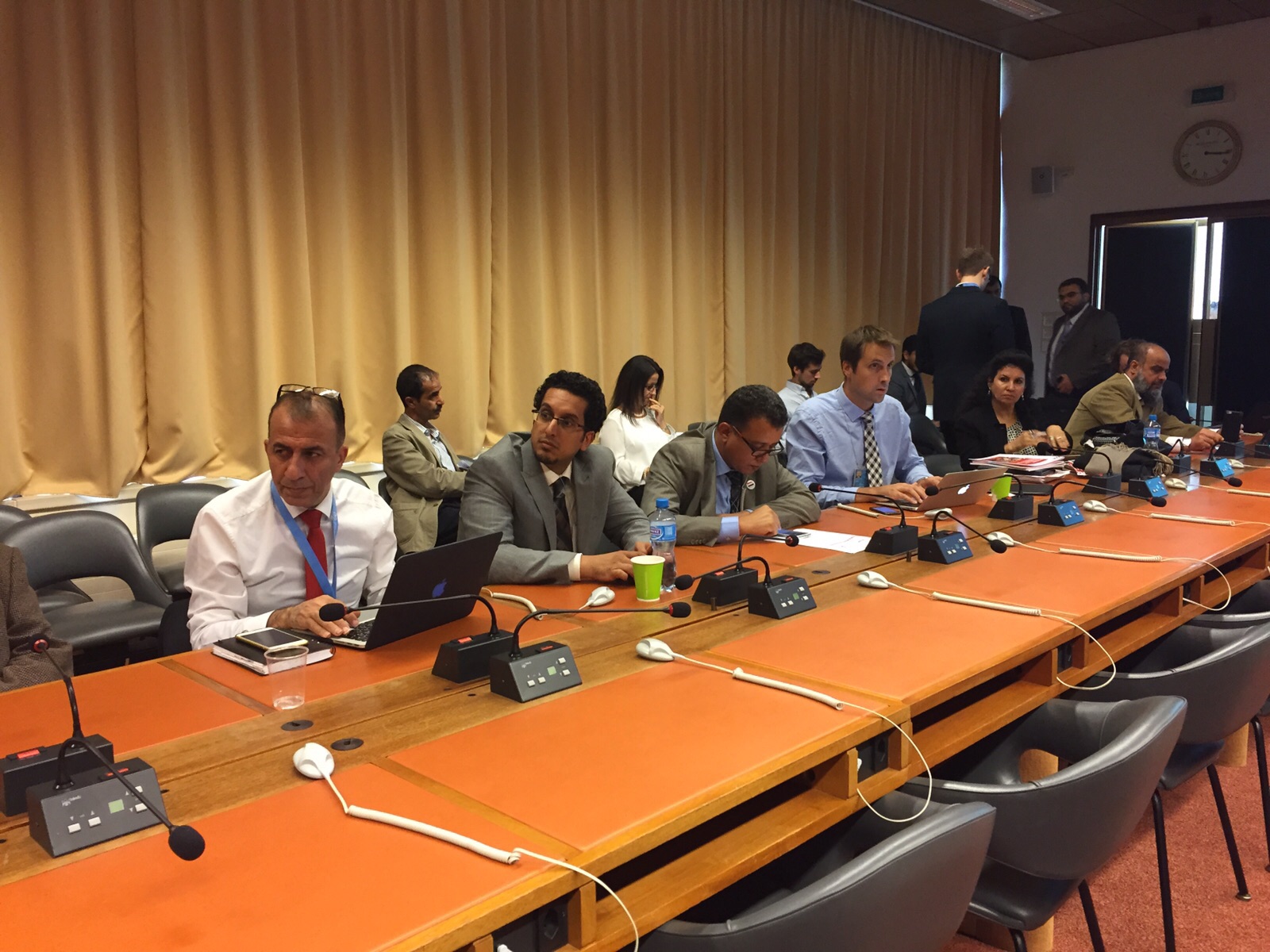 l, beginning the event by stating that little has changed for the better in Bahrain since the government assault on peaceful protesters in 2011. “Today, 2015 has clearly set highs in all categories of human rights abuse,” said Mr. Payne. He continued by welcoming international support for human rights. Referring to the joint statement issued at the Human Rights Council on Monday, he expressed hope that this public pressure would work to push the government in the right directions. “We’ve seen pressure work before,” said Mr. Payne. “Yet despite the steadfast efforts of Member States, Bahrain has proven adept at forestalling greater international pressure.”

Sayed Ahmed Alwadaei, the Director of Advocacy at BIRD, began his remarks by thanking the 33 States that joined the Swiss-led joint statement. “This recognition of the severe human rights violations means a lot to the people of Bahrain.” He continued by stating that he had recently seen personal tragedy as a result of his human rights work in the last year. “In January, the government revoked by citizenship. According to the government, I am no longer Bahraini.” According to Alwadaei, however, he is “among the lucky ones. If you look at 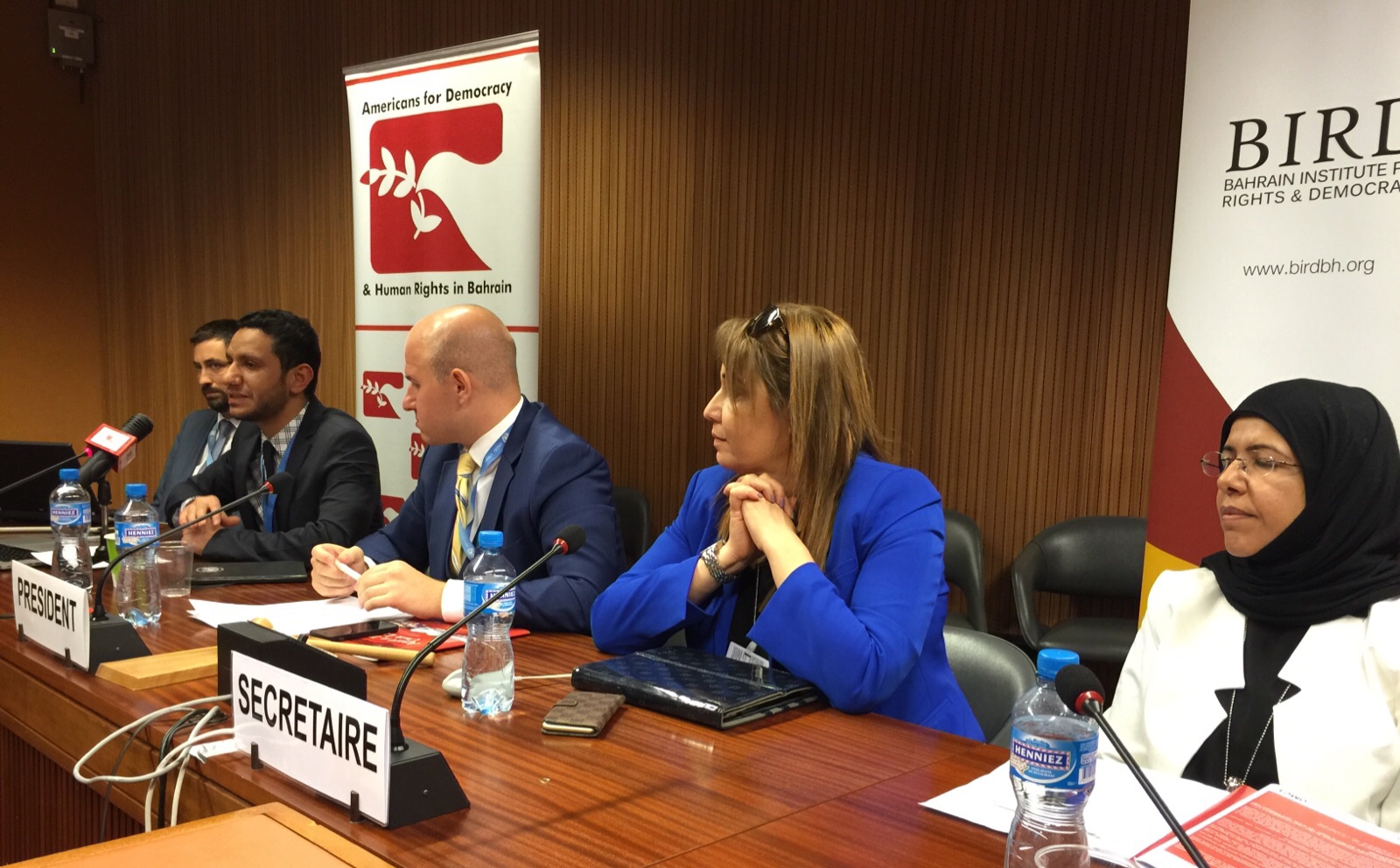 other human rights defenders, you can’t name anyone still on the ground that hasn’t been to prison, hasn’t been tortured.” He added that many of them are still there today. He continued by speaking of the actions of the international community, again praising the joint statement. “But at a time when we see the UN Working Group on Arbitrary Detention finding evidence of systemic torture in Bahrain… countries like the United Kingdom aren’t doing enough to help.” He closed by stating that “international pressure does work. Nabeel Rajab was released shortly after an EU Resolution demanding his release.”

Nuha Hassan, an advocate with the Bahrain Human Rights Society, continued the conversation by providing a perspective from the ground. “The Kingdom of Bahrain must comply with the International Covenant on Civil and Political Rights,” said Mrs. Hassan. She continued by stating that, despite their commitments, the Bahraini government continues to commit violations. “The Former Secretary-General of Wa’ad was arrested on charges of promoting to change the political system in the country using illegal means. The arrest and charges came after delivering a speech in a public forum calling for human rights and political reform.” Mrs. Hassan also named other prominent persons that had found themselves persecuted by the government, including Sayed Jamil Kadhim, Nabeel Rajab, and Nader Abdulemam. She later noted that the government had not yet completely implemented the recommendations of the Bahrain Independent Commission of Inquiry, and called on the government to “lift Bahrain up to a higher level of democracy.”

“Human rights defenders in Bahrain continue to be targeted just for doing their job,” said Nedal Alsalman from BCHR. She too, however, noted the efficacy of international pressure, stating that “Nabeel Rajab was released immediately following the European Union resolution.” She moved on to talk about the assa 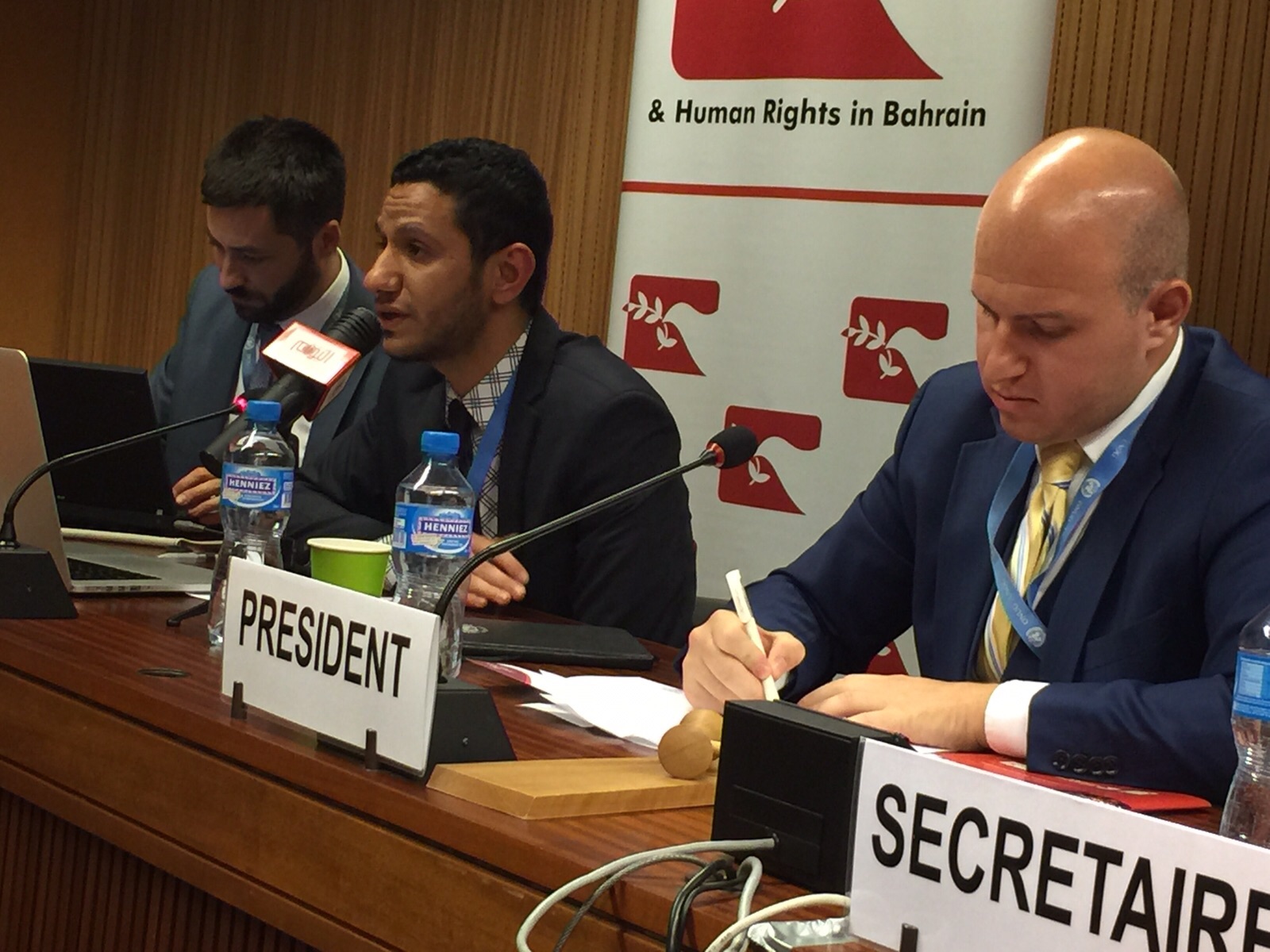 ult on the freedom of expression. “Insulting the king or insulting official institutions can lead to up to 15 years in prison,” Alsalman said. Human rights defenders were welcoming when the King accepted the recommendations of the BICI, she continued, stating that defenders had hoped that the BICI would mean the end of impunity. “This was just a public relations move,” Alsalman mourned. “We don’t need institutions that are mainly used for public relations. We need to see results on the ground. We need to insure that the right to protest is not restricted; we wish that the government would actually investigate torture… we wish that human rights organizations are able to carry out their work.”

Nabeel Rajab, the President of the Bahrain Center for Human Rights, later joined the discussion via Skype. He currently faces a travel ban in Bahrain after a court sentenced him to six months’ imprisonment on charges related to his freedom of expression. Nabeel expressed gratitute to state signatories of the joint statement raising concerns over the ongoing human rights crisis in Bahrain. He highlighted how state actions at the UN such as the joint statement have a positive effect on victims of abuse in the country. He also stressed the need to follow up on these joint statements through practical steps.

Phillipe Dam, the Deputy Director ofHuman Rights Watch in Geneva, closed the panel. “In spite of four years of repression, the human rights situation in Bahrain has been the subjected of debate at the Council for over four years. The benefits of joint statements cannot be overlooked.” He continued by stating that, in spite of continued repression, there is a space that Geneva can create for the work of human rights defenders. “Yet discussing the situation in Bahrain is more challenging today…” he said, stating that the Government of Bahrain has used new institutions like the Ombudsman’s office “like a smokescreen… in reality, the human rights situation has not improved.” Although the Government of Bahrain has tried to put itself in a positive image, “the fact that we had a joint statement yesterday showed that there is more that the Bahraini government must deliver.” Dam stated that he saw a “critical mass” of important players supporting the joint statement, but that a number of EU States “have failed to join the joint statement. Not seeing Italy, Spain, or counties like Finland join the fifth joint statement was very disappointing.” Other States “dragged their feet” in joining the statement; in this, Dam singled out the United Kingdom, who had “set up meetings” to advocate for the Bahraini government. “NGOs must keep the process moving forward,” Dam concluded