17 September 2015 – Geneva, Switzerland – The systemic practice of torture in Saudi Arabia was raised today in a parallel event at the 30th Session of the Human Rights Council. The event, hosted by Americans for Democracy & Human Rights in Bahrain (ADHRB) and co-sponsored by CIVICUS, the European Saudi Organizaiton for Human Rights, Index on Censorship, ALQST, the International Federation for Human Rights (FIDH), Amnesty International, English PEN, the World Organization against Torture (OMCT), and the Bahrain Institute for Rights and Democracy (BIRD). Gerald Staberock, the Secretary General of OMCT, chaired the panel, opening by thanking the organizers for hosting “the first event” specifically on torture in Saudi Arabia.

Eric Eikenberry, the Advocacy Associate at ADHRB leading the organization’s Saudi portfolio. “In 1997, Saudi Arabia accepted to the CAT. Yet the government delayed reporting to the treaty body over and over again.” Mr. Eikenberry continued by stating that the Committee against Torture has done “an excellent job” in detailing issues in Saudi Arabia, but that the government has often demurred instead of addressing the issues head on. “Cruel and degrading treatment in Saudi Arabia is legal, and disproportionately 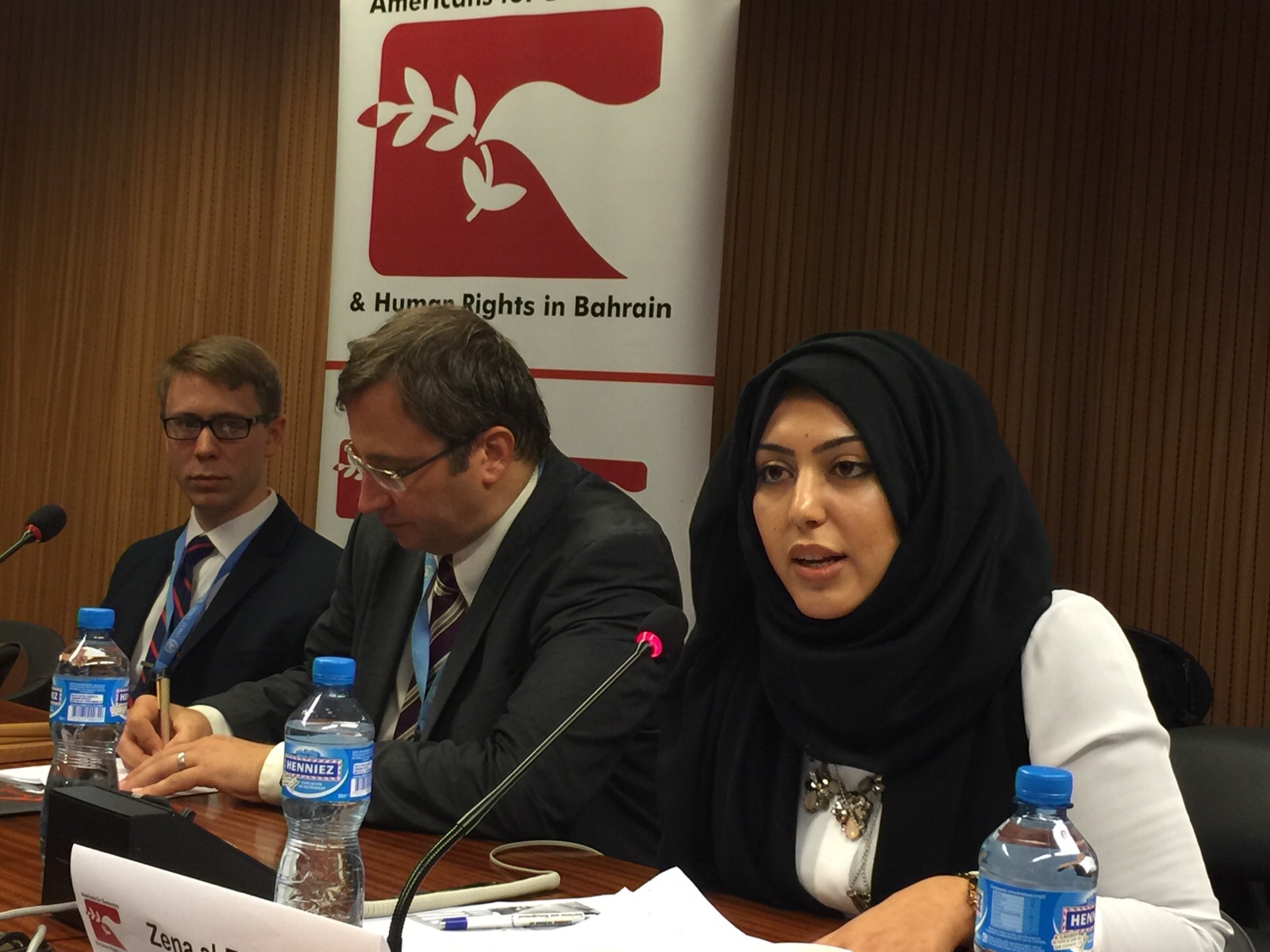 affects women, children, and even migrant labor, who are often punished for practicing ‘sorcery’.” He continued by highlighting a single case of abuse in which authorities “poured antiseptic fluid” down a victim’s throat. “Yet complaints of torture get swept under the rug,” Eikenberry continued, detailing how human rights mechanisms in the country only serve to cover up abuses. “The Saudi government has altogether failed to respect the treaty to which it acceded,” concluded Eikenberry. “Absent significant international pressure, the Saudi government will continue to ignore human rights abuses going on behind close doors.”

Zena al-Esia, a researcher at the European Saudi Organization for Human Rights, continued the discussion, stating that “recent reports of torture and ill treatment in Saudi Arabia have become deeply concerning.” She went on to explain how the government of Saudi Arabia uses the excuse of terrorism to commit human rights violations. “Saudi Arabia equates terrorism with non-violent activism; the laws are vague, and provide a platform for torture, as massive sectors of civil society are targeted for abuse.” She also explained how torture is especially employed in the eastern region, where protests shook the country in 2011. “What we saw was lots of violence at the point of protest… after arresting human rights defenders, Saudi Arabia uses torture to extract a forced confession, which it uses to obtain a death sentence.” Ms. al-Esia went on to describe how the government often uses these practices against children. In the case of Ali al-Nimr, for example, “government forces extracted a confession via torture. Ali was tried in a terrorist court at age 17… he had no access to his lawyer, and he was convicted and sentenced to death.” She added that his execution is imminent. According to al-Sinea, Ali al-Nimr represents what is quickly becoming a norm in Saudi Arabia, as the government increasingly uses torture against children in the country.

Yahya Assiri of ALQST joined the panel from Skype. According to Mr. Assiri, many people refuse to speak up against the government because out of fear for their lives. “One human rights defender was beaten with copper wire until he could see his own flesh on the floor. He was hung from the ceiling… he was stripped of his clothes and officers put out their cigarettes on his skin… When he complained to the Ministry of Interior, he was told that [current Minister of Interior] Prince Mohammed bin Naif had personally ordered his torture.” A recording of Yahya’s testimony can be found below:

Sevag Kechichian, a researcher on Saudi Arabia from Amnesty International, picked up the conversation at this point by discussing the abuse of the death penalty in Saudi Arabia. “Almost all of the cases that we documented were sentenced to death after grossly unfair trials,” said Kechichian. “Confessions extracted from torture are systematically used by th 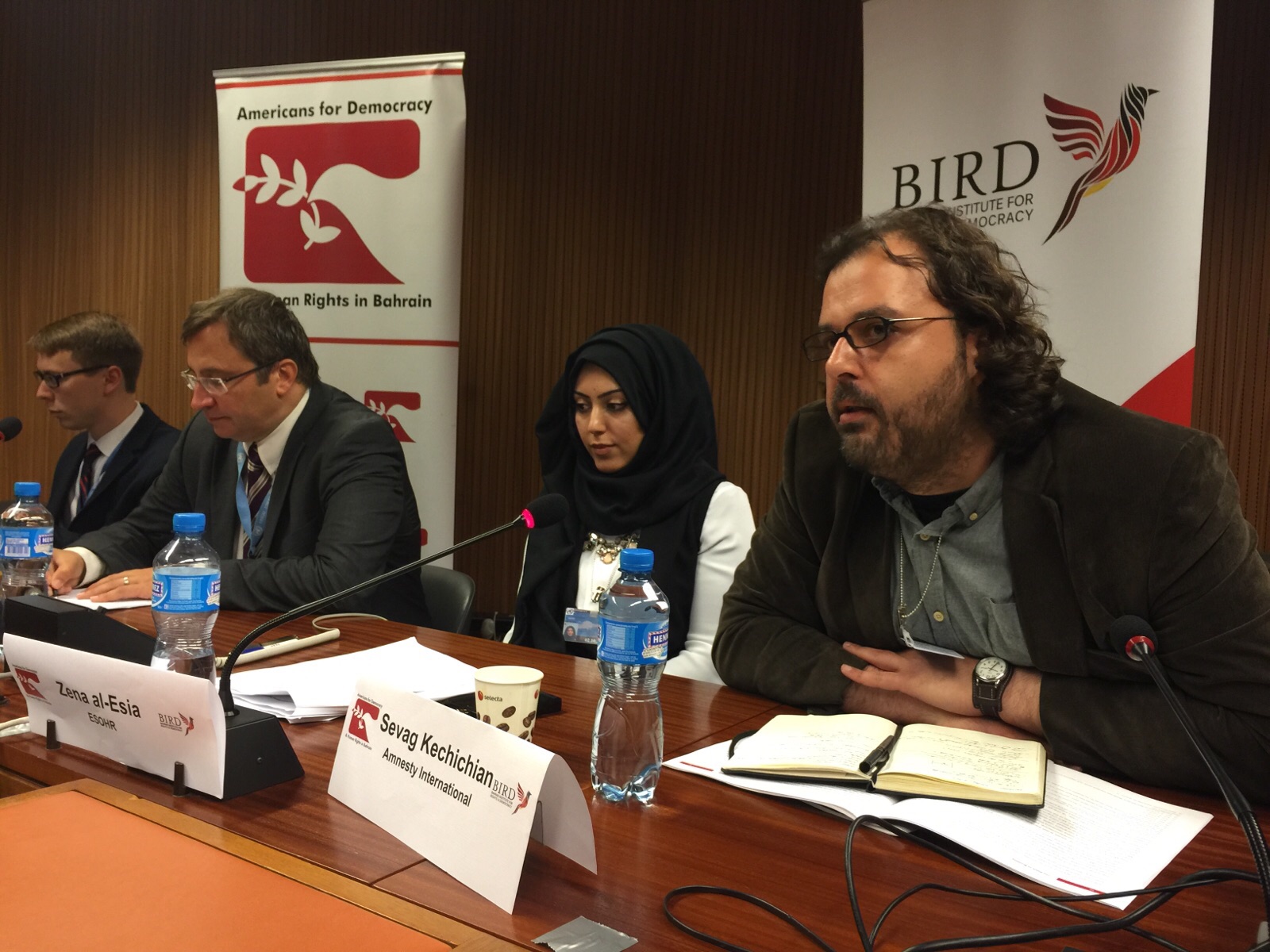 e government… and are often the only evidence.” Mr. Kechichian said that this problem especially affects migrants. “Poor domestic workers who don’t speak the language are not granted their rights.” He explained that the law often facilitates torture, adding that “incommunicado detention is allowed by law,” and that torture is often employed during periods of enforced disappearance. “Those that carry out torture do so with impunity,” said Kechichian. “Security forces have been accused of gross acts of torture, and they get away with it… judges cannot do anything that would negatively affect the Ministry of Interior.” “Torture is absolutely one of the most serious human rights violations in Saudi Arabia,” Mr. Kechichian concluded.

Ali al-Dubisy spoke briefly from the audience. “In 2011, from the first moment of my arrest, I was subjected to degrading treatment.” After being handcuffed, al-Dubisy described, “they put me in a dark cell in solitary confinement for seven days.” Al-Dubisy continued by stating that security forces eventually took him to the Saudi intelligence area, where he “was exposed to many types of violence and torture.” “Beating with hands, slapping, kicking legs, beating with hoses, standing for hours blindfolded… prevention of medical treatment, and increase of temperature in the cell,” were all practices that the Saudi security forces employed upon him, al-Dubisy recounted. “This is the type of torture in Saudi Arabia.”