1 October 2015 – Washington, DC – The FY 2016 National Defense Authorization Act (NDAA) conference report, released Tuesday by the Chairs and Ranking Members of the House Armed Services and Senate Armed Services Committees, would require the Department of Defense (DoD) to submit an assessment on the security situation in Bahrain within 120 days of the bill’s final passage. The report would include the security situation’s implications for US-based personnel in the country and provide options for the temporary relocation of US personnel should the situation become unsustainable. Americans for Democracy & Human Rights in Bahrain (ADHRB) commends and welcomes the decision to include the contingency plan requirement within the final NDAA.

This provision represents the first instance in which both houses of Congress have publicly called for a formal contingency plan for the US armed services currently serving in Bahrain and reflects broad congressional concern with ongoing unrest in Bahrain. With the escalation of violence and the increasing instability in the country, both houses of Congress have recognized the necessity of preparing for a potential relocation of the Fifth Fleet. 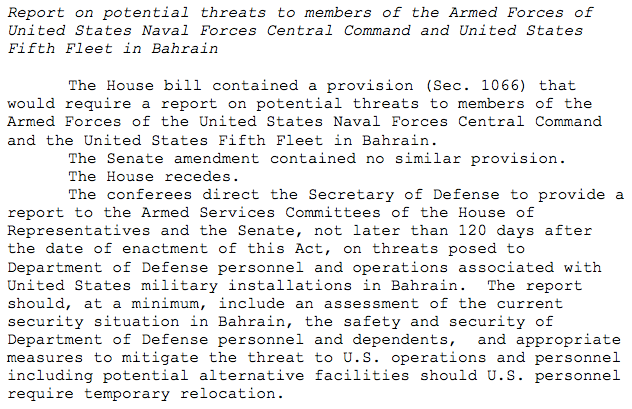 “Now that Congress has called for a plan for the Fifth Fleet should the unrest become untenable, it’s time for lawmakers to stop viewing the Fifth Fleet as a liability to push Manama to reform,” said Husain Abdulla, Executive Director of ADHRB. “Instead, the US government must use our substantial military presence as leverage to call for absolute respect for human rights.”

Bahrain’s continued antipathy towards human rights reform contributes to instability, calling into question the wisdom of maintaining a base without investigating other options. Abdulla continued, “The recent bombings must be viewed as a result of more than four years of institutionalized repression and political instability. This increased violence represents a potential threat to US personnel, and without meaningful reforms, it is only logical that the US begin looking for viable alternatives.”