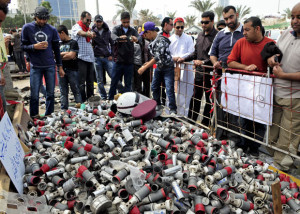 17 December 2015 – Washington, DC – Last month, the Government of Brazil blocked an independent investigation of the Organization for Economic Cooperation and Development (OECD) into the ethicality of a Brazilian company’s tear gas exports to the Kingdom of Bahrain. The decision, made by the Brazilian Ministry of Foreign Affairs, came after Americans for Democracy & Human Rights in Bahrain (ADHRB) requested that Brazil’s National Contact Point of the OECD investigate the business relationship between Bahrain and  Condor Non-Lethal Technologies. ADHRB calls on the Brazilian government to allow the OECD investigation to continue, and to hold its companies accountable for violations of business ethics and human rights.

Tear gas manufactured by Condor first appeared in Bahrain as early as 2011, when the government used tear gas and other riot control weapons in the suppression of the peaceful protest movement that swept the island nation that year. In 2012, the Brazilian government announced that it would investigate Bahrain’s alleged misuse of Condor’s product, later denying that Brazilian tear gas had been sold to Bahrain. In 2015, however, Condor tear gas re-appeared in Bahrain, as Bahraini security forces utilized the Condor product to suppress peaceful demonstrations. In January of that year, Bahraini security forces blanketed the entire village of Bilad al-Qadeem in tear gas in retaliation against peaceful protests staged in the area. As a result of their reckless use of tear gas, Bahraini citizen Abdulaziz al-Saeed asphyxiated in his home and died. Tear gas canisters manufactured by Condor were found outside of his home.

In September, ADHRB submitted a complaint to the Brazilian National Contact Point of the OECD, asking it to investigate Condor for potential human rights violations under OECD guidelines. The Contact Point decided that ADHRB’s complaint merited further examination, and requested that the Brazilian Foreign Ministry release information related to Brazil’s tear gas exports for verification. However, the Ministry refused to release the information, thereby blocking the OECD investigation and shielding Condor from accountability.

“The presence of Condor’s product outside of the home of Abdulaziz al-Saeed renders the company an accessory to his murder,” said Husain Abdulla, Executive Director of ADHRB. “The Brazilian government should investigate Condor’s involvement; instead, they’re shielding it from account.”

International pressure has in the past had a significant effect on Bahrain’s ability to obtain access to tear gas. In 2014, ADHRB participated in a “Stop the Shipment” campaign after discovering that a South Korean tear gas manufacturer planned to ship 1.7 million tear gas canisters to Bahrain. As a result of the campaign, the South Korean government indefinitely suspended shipments to Bahrain in the face of mounting evidence of systemic abuses, which it found to have resulted in civilian deaths. Earlier this year, the European Parliament also called for an end to European tear gas exports to the country, citing Bahrain’s failure to hold abusers accountable as justification for the ban.

“Brazil should be following the examples set by governments like South Korea and the European Union, but instead apparently condones the use of Brazilian products to murder innocent people,” said Abdulla. “As Bahrain continues to abuse tear gas to harm and kill its people, it falls on countries like Brazil to deny Bahrain access to their weapons.”