Five years ago this week, hundreds of thousands of people rose up in support of democracy and human rights in Bahrain. After enduring decades of structural inequalities, corruption, and repression, nearly half the country’s citizen population gathered to demand reform. The government responded swiftly, and severely. Riot police flooded the streets, employing excessive and indiscriminate force to disperse the demonstrations and suppress the movement. Assisted by a Saudi and Emirati contingent of the Gulf Cooperation Council’s (GCC) Peninsula Shield Force, Bahraini authorities violently put down the peaceful uprising, leading to thousands of arrests, hundreds of injuries, and dozens of deaths.

Still, despite constant pressure, Bahrain’s pro-democracy movement has endured. With the fifth anniversary of the original demonstrations fast approaching, Americans for Democracy & Human Rights in Bahrain (ADHRB), the Bahrain Center for Human Rights (BCHR), and the Bahrain Institute for Rights and Democracy (BIRD) would like to feature the pro-democracy movement itself – every person who risked his or her safety to work towards a better future in Bahrain – as February’s Champions for Justice. This month’s installment will trace the evolution of the movement since its inception in 2011, highlighting individuals who lost their lives or their freedom to government retaliation.

The Bahraini pro-democracy movement – in its current form – can trace its roots back to 2001, when the king promised to implement a series of political reforms through the National Action Charter, itself a response to the civil unrest of the 1990s. The National Action Charter was reportedly approved by 98% of Bahrain’s citizenry in a referendum on 14 February. But as years passed and the government failed to institute these reforms, popular dissatisfaction mounted.

By 2011, opposition groups and political activists in Bahrain were finding common cause with the massive demonstrations sweeping the Arab world.  For many in Bahrain, it seemed an opportune – and necessary – moment to revive the country’s longstanding pro-democracy movement; utilizing both social media networks and simple word of mouth, hundreds of thousands of Bahrainis coordinated peaceful protests on the anniversary of the National Action Charter referendum a decade earlier.

Notably, while the Government of Bahrain declined to make good on its promise of reforms in the interim, it had begun to tighten its restrictions on dissent and basic free expression. In the months prior to the first demonstrations, the authorities arrested 23 people on charges of organizing a ‘terrorist network’ to overthrow the government, including prominent activists like Abduljalil al-Singace, Sheikh Mohammed al-Muqdad, and Sheikh Saeed al-Nuri. Around the same time, pro-government media accused two well-known human rights defenders, Nabeel Rajab and Abdulhadi al-Khawaja, of having connections with a ‘terrorist network’ and spreading false news about Bahrain. The use of terror allegations to prosecute, intimidate, and discredit reform activists and human rights defenders, and the authorities’ general conflation of terrorism with non-violent dissent, would become a staple of government repression after 2011. 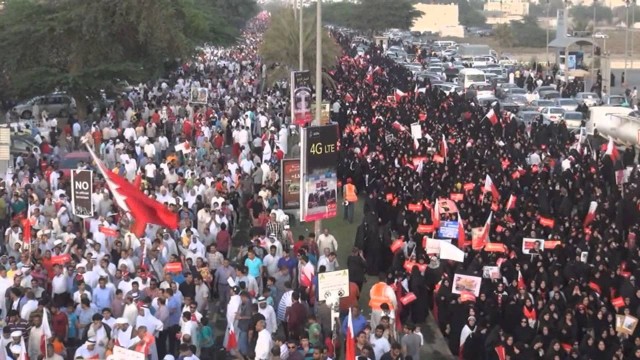 On 14 February 2011, the tenth anniversary of the National Action Charter referendum, almost half the country took to the streets of towns and villages across Bahrain to demand political reforms.  Peaceful marches and rallies called for limitations on the absolute monarchy of King Hamad bin Isa al-Khalifa, proposing the establishment of democratic institutions like an independent parliament with substantial legislative powers.

The government reacted quickly and violently. Though the protests were peaceful, security forces began firing on crowds with rubber bullets, tear gas, and reportedly even live ammunition. Ali Mushaima, a young protestor in the village of al-Daih, was the first demonstrator to be killed after witnesses say police opened fire on the crowds. The next day, security forces assaulted Mushaima’s funeral procession with tear gas and rubber bullets. The officers shot one of the attendees, Fadhel al-Matrook, who later died in the hospital.

As the authorities’ reaction turned lethal, tens of thousands of protestors gathered at the Pearl Roundabout in Manama, Bahrain’s capital, calling for a new democratic government and an end to the violence. In the wake of the demonstrators’ deaths, King Hamad delivered a televised speech expressing his regret and promising to launch an investigation. Still, on the night of 17 February, after the king’s speech, riot police violently attacked the protestors encamped at the Pearl Roundabout. Security forces employed tear gas and rubber bullets to forcibly disperse the demonstrators, killing five and injuring more than 50.

Ali Ahmed al-Moumen, an engineering student at the University of Bahrain, was among those killed by security forces during the raid on the Pearl Roundabout. Al-Moumen was helping medics treat wounded protestors when government forces shot him with rubber bullets. He later died of his wounds. The following year, on 27 September 2012, the Third High Criminal Court acquitted the police officer who killed al-Moumen, stating that the assault had been accidental.

Reports soon emerged that the authorities were also targeting any doctors or medical personnel who attempted to care for the wounded protesters, and were preventing ambulances from collecting the victims. Moreover, after many activists began to protest outside the Salmaniya Medical Complex, the authorities occupied the facility and harassed the staff. 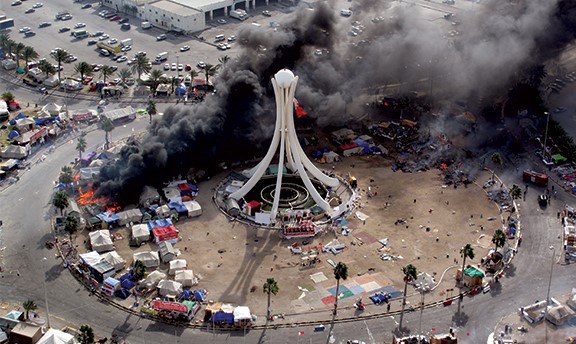 s the situation deteriorated, the king made several nominal concessions to the pro-democracy movement: three ministers were fired and the 23 people imprisoned in September 2010 on terror charges were released. Tellingly, however, the authorities re-arrested most of these same individuals after the king declared a state of emergency and requested assistance from the GCC Peninsula Shield Force in the form of Saudi and Emirati security personnel.

About a month after the first protests, the authorities demolished the monument at the center of the Pearl Roundabout as part of what The Guardian characterized as “a plan to revert central Manama to life before” the pro-democracy demonstrations. The government’s efforts notwithstanding, the Pearl Roundabout would go on to become a symbol of the reform movement in Bahrain.

Despite the government’s violent suppression of the uprising, pro-democracy demonstrations in Bahrain did not end in 2011. Protestors continued to call for reform all over the country, from the United Nations office in Manama to the Ministry of Labor. Those demonstrating at the Ministry of Labor were demanding the right to return to their jobs after being fired for participating in the protests, a subtler form of reprisal that affected Bahrainis in a variety of professions. 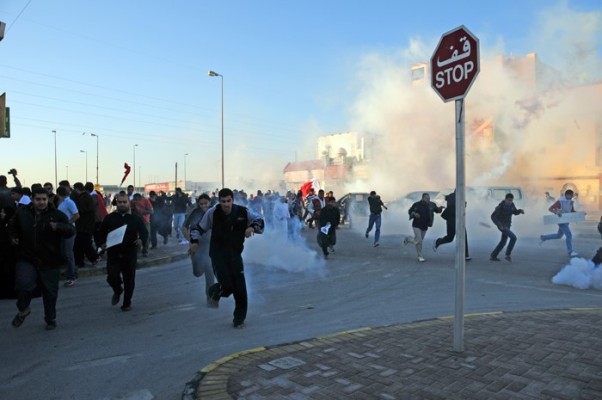 On the first anniversary of the revolution, security forces occupied the Pearl Roundabout and increased the number of checkpoints. The authorities continued to use excessive force to disperse protesters. They frequently effected arbitrary arrests of individuals suspected of participating in protests, or who were present in an area where protests were often held. Security forces also prevented journalists from accessing areas near ongoing protests and attempted to deny international media entry to the country.

Though the government established the Bahrain Independent Commission of Inquiry (BICI) to investigate human rights violations and provide recommendations for reform in the aftermath of the 2011 protests, the authorities continued to commit extensive abuses in their response to the unrest. Independent assessments of the country’s political situation in 2012 found that the government had fully implemented no more than five of the BICI’s 26 recommendations.

In October 2012, the Ministry of Interior announced a ban on all public rallies, claiming that even many authorized gatherings had violated the law of public assemblies by attacking public property and calling for the overthrow of the government.

Moreover, in the year since the previous protests, the authorities killed at least 60 people. On 1 March 2012, 22-year-old Fadhel al-Obeidi was protesting in the village of Diraz when riot police shot him with a teargas canister.  According to witnesses, the police officers proceeded to beat him after they wounded him. A week later, Fadhel was declared brain-dead. He died on 10 March 2012.

By the second anniversary of the original demonstrations, security forces had killed between 87 and 120 people in their campaign to suppress the pro-democracy movement, including 13 children. Still, on 14 February 2013, despite the ban on public assembly, thousands of peaceful protestors once again took to the streets. As in previous years, the government responded with excessive force; reports indicate that the authorities’ irresponsible and indiscriminate use of teargas and shotgun pellets resulted in large numbers of physical and respiratory injuries.

In the village of al-Daih, riot police shot and killed 16-year-old Hussain al-Jazeeri during a protest. Though the government launched an investigation into the incident, a court released the police officers implicated in al-Jazeeri’s death on bail several months later. By the end of 2014, the authorities announced that they had closed the investigation and were not pursuing legal action against the officers. 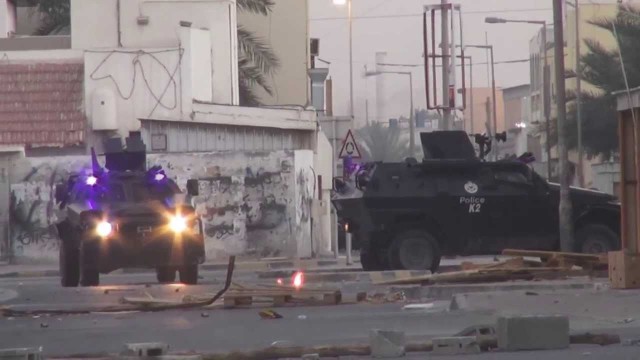 In February 2014, crowds of Bahrainis again defied the prohibition on public assembly and gathered to mark the third anniversary of the movement. Risking imprisonment and torture, activists braved the increased police presence and organized demonstrations near the site of the Pearl Roundabout, which remained under the control of the security forces.

The authorities effected at least 69 unlawful arrests and dispersed the remaining demonstrators by force, causing high numbers of injuries. Many of the wounded were forced to seek medical treatment at home and in underground clinics, as they feared they would be detained at public hospitals. In the years since the security forces first occupied Salmaniya Hospital in 2011, doctors alleged that the government had effectively militarized Bahrain’s healthcare system, using hospitals as a means of monitoring activists.

In 2014, the government also promulgated legislation that outlawed criticism of the king and further criminalized free expression. According to the law, insulting the monarchy carries a penalty of a minimum seven-year prison term.

Between just January and May 2014, security forces killed at least three people, including 14-year-old Sayed Mahmood Sayed Mohsen Sayed Ahmed. Sayed was attending a funeral when security forces fired on the procession. Officers shot Sayed in the chest with shotgun pellets, killing him.

The government also targeted women’s rights activists in 2014. In September 2014, the authorities arrested Ghada Jamsheer, the head of a women’s rights group called the Women’s Petition Committee, on charges of posting “insulting tweets.” Her arrest came after she posted messages about corruption in King Hamad University Hospital, which is run by a member of the ruling family. Though she was soon released, authorities later rearrested Jamsheer only hours later on separate charges of “assaulting a police officer.” Jamsheer has had twelve cases brought against her since September 2014. 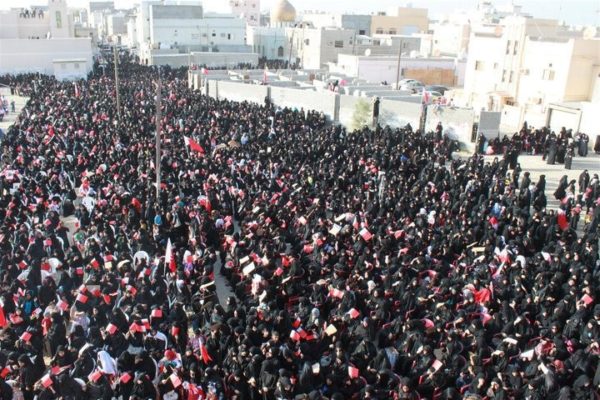 On the most recent anniversary of the uprising, even after four years of increased restrictions and an intensified police presence, demonstrators turned out in large numbers to protest government repression. According to prominent human rights defender Nabeel Rajab, more people may have gathered in 2015 than  in 2012, with some activists trying new forms of peaceful civil disobedience, such as placing teddy bears at the sites of previous protests in order to raise awareness for the movement and satirize the government response.

The authorities, however, applied the same heavy-handed tactics as they had in earlier years, firing tear gas and shotgun pellets into crowds and communities known to hold protests. Security forces unlawfully raided homes without presenting search warrants and effected scores of arbitrary arrests. In early 2015, the Bahraini government also revoked the citizenship of 72 individuals, including journalists and activists in the pro-democracy movement.

This Sunday is the sixth anniversary of the modern pro-democracy movement in Bahrain. Unfortunately, as documented in our report Shattering the Façade, the Government of Bahrain has failed to implement many of the political reforms or human rights protections recommended by the BICI half a decade ago. Instead, the authorities have demonstrated a consistent willingness to use intimidation and force in order to quell peaceful protests and silence dissent.

Yet Bahrain’s pro-democracy movement perseveres – and just maybe this 14 February will be different.