Sunday, 14 February 2016, marked the fifth anniversary of Bahrain’s peaceful uprising. Bahraini people took to the streets protesting injustice and demanding freedom and democracy. The authorities responded with extensive use of force which resulted in numerous injuries.

We followed up on the events leading up to 14 February and were on the ground documenting human rights violations, protests and more during the day of the anniversary.

On 9 February 2016, amid calls for protests on the anniversary of the uprising, the Chief of Public Security threatened anyone who “calls to disrupt security and public order in Bahrain.” He labelled any such acts as “illegal”, “terrorizing”, and “disruptive of public order.” Moreover, he requested anyone who witnessed this behavior to call an MOI hotline.

On 14 February 2015, and among the continued and intensified protests, the Chief of Public Security accused protesters of holding foreign agendas, stating that Bahrain “still faced security threats from Iran-backed elements and militants linked to Islamic State.”

The King, his family and government officials celebrated the 15th anniversary of the National Action Charter, which ministers and senior officials claimed “put Bahrain on the path of progress, freedom, democracy and justice, in line with the provisions of the constitution and the rule of the law.”  They hailed the Charter as the King’s “pioneering reform project.”

People organized peaceful protests in villages and towns all over Bahrain to mark the anniversary. Although there have been daily and nightly protests in many areas since 2011, the number of protests increased significantly from the beginning of February and more people took to the streets. From 11 to 14 February 2016, BCHR documented 157 protests, of which at least 33 protests were suppressed using tear gas and shotgun pellets. Security forces tried to prevent these protests by increasing security measures and putting areas under siege. 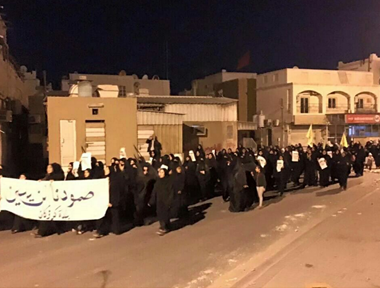 In  the week between 7 and 14 February, authorities arrested 89 individuals, including 30 children as young as 10 years old, which is an approximate 36% increase compared to the week before. Over 60% of arrests took place between 11 and 14 February. The highest number of arrests was recorded on 14 February. Moreover, most of the documented arrests occurred on the streets as a result of suppressing protests.

The Bahraini authorities also arrested four American journalists, who were covering protests in Sitra, an island near Manama. Bahrain’s Ministry of Interior stated that it had arrested one of the journalists with a “a riot group” in Sitra and the others were arrested at a checkpoint. The MOI said that they gave false information about the work they do and that they practiced unlicensed media activities. Bahrain has made it extremely difficult for journalists to legally cover protests and opposition activities. 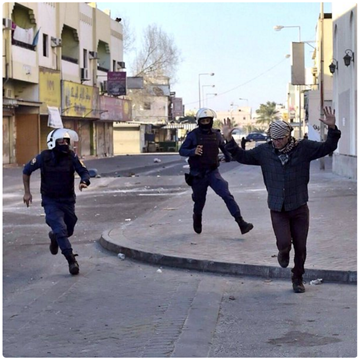 Arrest of one of the American Journalists in Sitra

Use of Excessive Force

Numerous cases of shotgun injuries and cases of near suffocation from tear gas were documented by activists on the ground. Videos and images went viral on social media of security forces firing at protesters and the injuries which resulted from this use of force.

Excessive use of teargas

The Bahraini authorities are in clear violation of basic and fundamental human rights according to international human rights laws. They have particularly abused the rights to free expression, opinion and assembly, as protected by the International Covenant on Civil and Political Rights (ICCPR), which Bahrain acceded to in 2006. They have jeopardized on many occasions protesters’ right to life by subjecting them to tear gas and shotgun pellets. The Government of Bahrain, with little protest from its allies, continues its path of escalation of human rights abuses rather than implementing reform and having constructive dialogue with its people.