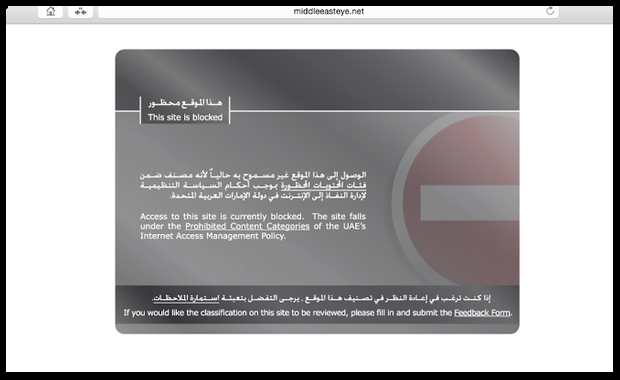 On 29 June 2016, various internet users in the United Arab Emirates (UAE) reported that Middle East Eye, an online news organization, was blocked by Emirati authorities. Internet users in the country receive the following official message when attempting to visit the website: “Access to this site is currently blocked.” Middle East Eye notes that it has reported “extensively” on the UAE, including the country’s engagement in the war in Yemen and its alleged human rights violations. The site now falls under the “Prohibited Content Categories of the UAE’s Internet Access Management Policy.”

The website is the latest addition to a growing list of websites that the UAE Telecommunications Regulatory Authority (TRA) blocks in the country. The TRA blocks websites that allegedly promote terrorist or criminal activities, contain pornographic material, or present any material that is offensive to religion. The TRA also targets any website that “offends against, is objectionable to, or is contrary to the public interest, public morality, public order, public and national security [of the UAE]”. The TRA uses the last category to block news outlets that are critical of the UAE government, such as Middle East Eye, as well as websites that call for political reform in the country such as the Islah political group website. The TRA also targets the websites of human rights organizations such as the Beirut-based Gulf Center for Human Rights (GCHR). In addition to blocking websites, UAE authorities filter internet content by blocking 500 search terms and political hashtags on Twitter, such as ones discussing political detainees in the country. Emirati human Rights activists and blogger, Ahmed Mansoor, started a twitter campaign using the hashtag #blocked_sites_in_uae to bring attention to websites blocked by TRA.

In parallel to the TRA’s ongoing effort to block and filter online content, UAE authorities also monitor and even prosecute internet users. Employing the country’s 2012 cybercrime law and its 2014 anti-terrorism law, the UAE security forces and judiciary have effectively criminalized a range of online activities related to free expression. On 14 March 2016, Marwan Mohammad Atiq bin Sufyan, an Emirati blogger, was sentenced to 5 years in prison and 1 million AED by the UAE High Federal Court for “insulting the state and damaging its reputation.” Twitter users who express criticism of the government are subject to detention and imprisonment by security forces as well. Emirati security forces arrested Osama Najjar, a human rights activist, on 17 March 2016 on charges of “instigating hatred against the state via twitter” and “spreading lies” about the torture of his father, Hussain Najjar. Hussain Najjar is one of the UAE94, a group of 94 activists prosecuted en masse by the Emirati government, and is currently serving an 11-year jail term for his political activism.

On 1 July 2016, the United Nations Human Rights Council (HRC) passed a resolution that condemned countries that “intentionally prevent or disrupt access to or dissemination of information online” and considers any attempts to do so as a human rights violation. By blocking internet access and monitoring internet use in the country, the UAE government violates Article 19 of the Universal Declaration of Human Rights (UDHR) which states that, “Everyone has the right to freedom of opinion and expression.” The UAE must ensure freedom of expression online by not restricting access to websites critical of the government or those that promote human rights in the country.