When the Arab Spring made its way to Bahrain on 14 February 2011, Bahraini authorities acted quickly to suppress the peaceful protests with violence. They detained, tortured, and killed protesters for exercising their rights to free speech and assembly. The Sunni al-Khalifa government specifically targeted leaders of the political opposition, which mainly consisted of Bahrain’s Shia majority and other human rights defenders.

While several men have risen to prominence for speaking out against the Kingdom of Bahrain’s human rights abuses, women also played a crucial role in the protests. Many have suffered consequences for their activism. The National Safety Court, Bahrain’s emergency military tribunal, has given sentences of up to 15 years in prison to women voicing their dissent. Women in prison routinely face torture and various forms of degradation, including, but not limited to, sexual harassment, rape, beatings, electric shock, and forced removal of the hijab.

The first woman arrested and detained in the 2011 uprising was Fadhila Al Mubarak. On 27 March, Bahraini authorities charged and convicted her of inciting hatred towards the regime by playing revolutionary songs in her car. The National Safety Court did not provide her with legal representation and sentenced her to four years in prison.

Bahraini authorities have also killed women for their activism. At the height of the Arab Spring protests in March, a 51-year-old woman named Bahiya Abdelrasool Alradi was shot in the head by the military while driving her car. While the Bahrain Independent Commission of Inquiry (BICI) concluded that Bahraini Defense Force members caused Alradi’s death, none of them were criminally charged for her killing.

The government also systematically silenced women doctors, nurses, and teachers who supported the uprisings through torture and imprisonment. For example, Rula al-Saffar, a nurse, and Dr. Nada Dhaif were both jailed for providing medical assistance to injured demonstrators in 2011. They reported suffering from torture, sexual assault, and threats of rape while in custody at Isa Town Women’s Detention Center. 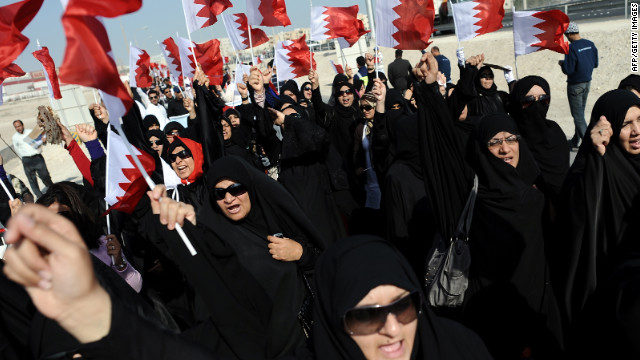 In June 2011, security forces raided girls’ schools in Bahrain and arrested dozens of teachers and students from classrooms and detained them for periods ranging from a few hours to several weeks. That same year, Bahraini security forces arrested five members of the board of the Bahrain Teachers’ Society, including three women, after they called for a strike. The National Safety Court sentenced Jalila Al-Salman three years in jail. Authorities charged her for inciting hatred and “attempting to overthrow the regime” after participating in peaceful demonstrations against the Kingdom.

Women have not only joined men in voicing their collective grievances against the oppressive government, but they have also organized campaigns on their own. In September 2011, women gathered in Manama to rally against the parliamentary elections occurring that month. Like the February and March uprisings, security forces used violence to repress this protest and arrested 45 women and girls. Similar incidents of arbitrary detention of women protesters are addressed in the United Nations’ special procedure communications to Bahrain between 2011 and 2016, revealing a pattern of targeting women advocates.

Ghada Jamsheer has been particularly outspoken regarding gender discrimination by the government. Her advocacy for family law reform and other women’s rights issues has made her a globally renowned figure, and she has subsequently been silenced through multiple arrests over the past decade. She is currently facing charges for writing about corruption in King Hamad University Hospital.

Like most Gulf Cooperation Council (GCC) countries involved in the Arab Spring, an increase in women’s participation in the Bahraini uprising has not necessarily translated into progress for women’s rights. Among the political opposition in Bahrain, calls for reform do not include legislating and implementing equality between genders. This is because some of the Shia spiritual leaders of the largest political opposition parties in Bahrain restrict women from leadership roles. This rejection, in conjunction with the Kingdom’s surface-level approach to gender equality, leaves little space for women to influence political affairs. Despite these barriers, Bahraini women continue to resist the systematic injustices the government has imposed on them and call for social progress throughout the country.