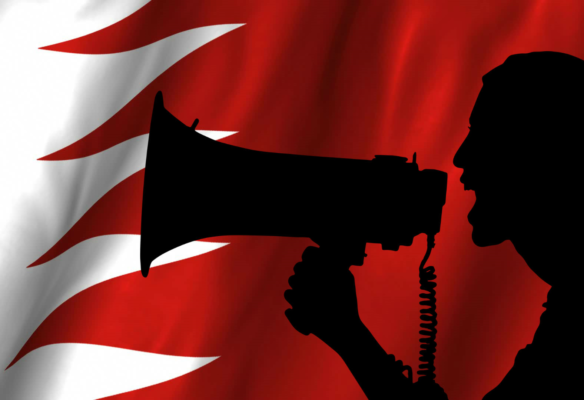 Since the 2011 Bahraini uprisings, there has been a severe crackdown from the government on the civil liberties of the country’s citizens. Years of mass incarceration, torturing political prisoners, and repressing the freedoms of speech and assembly have finally culminated in some of the largest protests seen since 2011.

The international community has watched all of these events unfold over the span of just two months. The United States Department has condemned Bahrain’s unprecedented attempts to silence dissent. The United Kingdom has shared these sentiments of concern. Americans for Democracy & Human Rights in Bahrain (ADHRB) and its partner organizations have been reporting on these events, ensuring that these aggressive attempts by the government to silence dissent are publicly known. However, it is important that the people of Bahrain share their own perspectives on what is happening in their country.

This installment of Voices from the Ground is comprised of interviews with Bahrainis currently in the country, in exile, and in diaspora. Although not all of these individuals are directly on the ground, they have a deep-rooted connection to Bahrain’s narrative. These personal stories are vital for keeping the spirit of the revolution alive. We encourage all of our Bahraini readers and Twitter followers to share their own stories with us, at @ADHRB using the hashtag, #BahrainSpeaks.

In your own words, can you explain what has been happening for the past few weeks?

In the last few weeks, civil society came under direct and open assaults by authorities and the government became bolder than ever in targeting religious leaders, human rights defenders and civil society organizations that expose corruption, highlight human rights violations, and demand democratic reforms. The international community only had a modest response to the alarming nature of the crackdown on civil society. The crackdown is expected to escalate to a complete blockage and ban on all nongovernmental activities
-Ebrahim Demestani, formerly imprisoned medic and human rights & labor activist

Basically the government is implementing new policies that will legalize oppression and make it a part of normal life. There are new laws and restrictions that include any dissent and any criticism of the government.
-Husain Abdullah, Executive Director of ADHRB

Right now there are unprecedented moves from the government to intensify their crackdown on the people. They have been shutting down all spaces for Bahrainis to express their political beliefs, taking away citizenships, and repressing human rights. This is a very dangerous exacerbation of the situation in 2011.
-Maryam al-Khawaja, Co-director of Gulf Center for Human Rights

The government is aware that economic challenges will hit everyone, including the Sunni minority. The government wants to convince the Sunni population that there are internal challenges by people who are not loyal to the state.  I do not believe the Sunnis will buy this argument. The Bahraini government is a major obstacle to change. It’s not about public opinion or sectarian issues; it’s the government that refuses to reform.
-Matar Matar, former Bahraini MP

Bahrain is continuing to prevent Shia-affiliated organizations from helping the people. The government has even taken money that is meant for the poor and for educational materials for Shia children, claiming that this money was obtained by illegal fundraising. They are taking away the people’s right to voluntarily give khums to the Shia clerics. In Diraz, a fence has been built so no one can move in or out. Internet has been severely restricted. They even cut the power and water supply sometimes. Ambulances are not permitted to go inside unless they get special permission. We are seeing people being detained if they make an attempt to enter or leave Diraz.
-Mohamed al-Tajer, Bahraini human rights lawyer

What are you feeling about the current situation?

I always thought studying outside of Bahrain would be better for me after what we experienced as a family in Bahrain. Unfortunately this is not the case. After being the UK for just a few months, my mother called me to say that police have surrounded my house and my father is being arrested. She told me to get on Twitter and tell the world what is happening to him. I hate that my family has to suffer alone; they are without me and without my father. But I know they are strong because they have a cause and they believe in it.
-student

I feel freedom of association will be completely banned soon, leading to civil unrest. The authorities are going to further constrain civil society to unprecedented level since 2002 and political opposition will be criminalized.  Everyone who defends the rights of citizens, challenges abuses of power, exposes corruption, and mobilizes peaceful public protests will land in jail or in exile.
-Ebrahim

I’m very worried. I’m extremely frightened that it’s not going to stop here, that is going to continue getting worse. I expect that the government will use violence against peaceful protesters, which may cause innocent protesters to lose their lives. I’m worried that the peaceful sit-in in Diraz will not be allowed to continue peacefully.
-Husain

I feel frustrated. As we look at the development of this situation for the past five years, Bahrain’s closest allies have been telling them that this would happen. There has been no accountability for the government and it is a direct result of the lack of international response. That’s the most frustrating part, that this situation could have been avoided if Bahrain’s allies and the international community had responded appropriately to their ongoing repression of human rights.
-Maryam

I’m very worried about the safety of the people. We had this experience with the Bahraini government when they tried to control the crowds in 2011. They go beyond just control and try to take revenge. In 2011, people who were already killed or injured were attacked again from the back. The policy was not to control but to punish. With such experience, I am worried for the safety of all those protesting. On the other hand, the government gave promises of reform, and promised to abide by BICI recommendations. It’s very clear that the government has failed to institute these reforms.
–Matar

Can you describe the overall atmosphere in your community right now?

Many of the Bahrainis who have been imprisoned there are my friends. We were all raised in the same neighborhood. The young people in prison are brave and strong and determined to see change. You’ll see these young guys at ages 16, 17, or 18 years old, but they seem much older because of the torture they have endured in prison. When you meet them personally, they are like teachers; they are very strong and will do anything for a better life for their children and grandchildren. But they are now starting to feel hopeless after 5 or 6 years of suffering. They also starting to feel helpless because the human rights organizations can’t do anything, and the United Nations won’t do anything.
-student

All the actions committed in the last few weeks demonstrate how the prejudice against Shia Muslims is systematic in Bahrain now. Shias feel Bahrain is unlivable unless the government stops the systematic practice of sectarian discrimination and marginalization. This has to stop immediately.
-Ebrahim

Bahrainis inside the country, activists and regular citizens, are resilient. They still hope that they can accomplish a free and just Bahrain where human rights are respected. They hope that all Bahrainis’ interests can be represented in this new Bahrain that they are fighting for. Bahrainis outside are worried about their families inside. They are disappointed that Western allies of Bahrain still have not used the serious leverage they have against this regime that is freely violating human rights.
-Husain

We know that things are going to get worse. We haven’t gotten to that point yet, but things are going in that direction. It’s a very slippery slope, it’s boiling under the surface. There’s this general sense on the ground that things are only going to get worse and that people are going to have to protect themselves. People feel an existential threat, and that their livelihoods are being threatened. Especially because the leading voices in the country that have advocated for peaceful resistance have now all been silenced by the government.
-Maryam

People in Bahrain surprise me with their energy and commitment to the cause. They take major risks when it comes to calling for reform. People insist on real, tangible outcomes in justice and equality.
-Matar

I think the major turning point for Bahrain is the revoking of Sheikh Isa Qassim’s citizenship. The country has erupted in sympathy for him. Hundreds of protesters are surrounding his house day and night. The people are denying any kind of attempt by the regime to expel him from Bahrain. No one knows how much Bahrainis are suffering except those of us living inside the country. Bahrain has turned into a cage where people can’t move, speak, can’t work. A lot of people have lost their jobs since 2011, and things are slowly taking over day by day by non-Bahrainis.
-Mohamed

How does this compare to the 2011 uprisings?

Before the 2011 uprisings, we did not have this many martyrs in our country, or nearly 4000 prisoners. However in 2016, people know what al-Khalifa can do, and how much torture and killing the government is willing to do. There are people that are now afraid to go to the streets. In 2011, we saw nearly half the country in the streets. But protesters know that something very bad might happen to them this time.
-student

The situation is very similar to 2011 however the number of killings and torture has been reduced due to the sophistication of repression tools used by authorities. However. things could get worse at anytime.
-Ebrahim

Unfortunately it is worse than 2011. In 2011, there were no laws that legalized violent behavior by the Bahraini government. Right now, they have the power of the judiciary, which is not independent, fair, or impartial. The oppression and dictatorship is now legalized in Bahrain.
-Husain

It’s very different. I don’t think you can really compare it because in 2011 the government was reacting to mass protests. Now they are taking repressive actions despite not having mass protests to respond to. They have taken it upon themselves to initiate a crackdown in order to send a message to the opposition.
-Maryam

In the 2011 protests, government punished all those protesting. People should be aware of what is coming. The people are protesting to show that they are not ready to give up. People are committed but they are also worried about safety. All efforts will lead to progress in due time. The government has continued to marginalize Bahrainis. They are restricting them in less bloody way today, but on a wider scale.
-Matar

We cannot say that Diraz has turned into another Pearl Roundabout, but has ignited a flame that causes everyone to start speaking out against the regime again. It seems that a new energy has been given to the revolution. This unrest has reappeared after months of people being afraid. It seems that now we are no longer going to be pushed into silence.
-Mohamed