On 25 October 2016, Americans for Democracy & Human Rights in Bahrain (ADHRB), along with Bahrain Institute for Rights & Democracy (BIRD), and Amnesty International co-hosted a panel at the United Kingdom Houses of Parliament. The event coincided with the release of ADHRB’s newest report, Living as Commodities: Human and sex trafficking in the GCC, and provided a corresponding discussion of the current status of human trafficking and migrant exploitation in all six countries in the Gulf Cooperation Council (GCC). 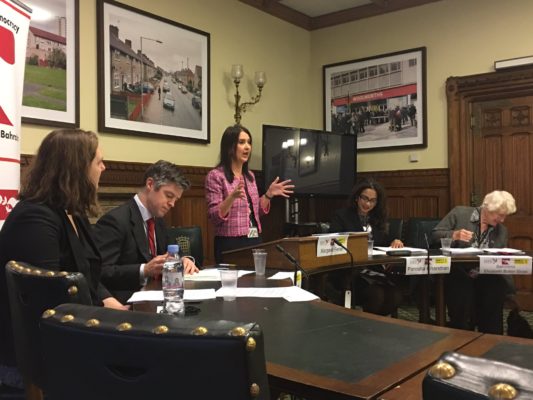 domestic migrant workers face in the GCC. She noted that the media has been silent on this issue across the UK, even when it comes to the migrant exploitation surrounding Qatar’s preparations for the 2022 World Cup. She listed examples of abuses that migrant workers face in their various lines of work, which are why migrant exploitation is considered modern day slavery. Ferrier finished her opening remarks by reiterating that this is a crucial problem that must be fixed, and an important first step is allowing the voices of migrant workers to be heard.

Ferrier then introduced Baroness Elizabeth Butler-Sloss, who commented on the development and impact of the United Kingdom’s Modern Slavery Act 2015. The baroness mentioned that the UK also has a human exploitation issue; it is a country of destination, transit, and origin for victims of trafficking. That is why Prime Minister Theresa May described modern slavery as the greatest human 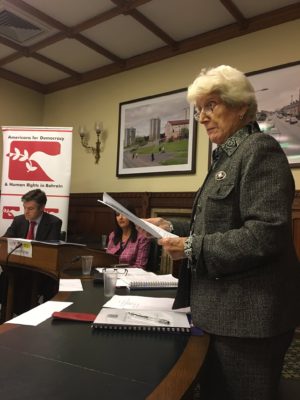 rights issue of our time, and created a high level task force to ensure that the government remains engaged in issues of human trafficking. The UK Modern Slavery Act, which was passed last year, brought all existing human trafficking laws in the UK under one piece of legislation and made additional protective provisions. According to Butler-Sloss, one of the most important provisions of the Modern Slavery Act considers transparent business practices, and aims to hold companies accountable for human trafficking that occurs in the delivery of services or goods at any point in their supply chains. The baroness conceded that it is very difficult to catch traffickers, and poor data collection prevents the government from filling in the gaps in victim support. However, there are UK officials who are committed to making these improvements.

Brittany Hamzy was then introduced and provided her remarks, which summarized the content of ADHRB’s report on human trafficking in the GCC. Hamzy first drew attention to one of the first advocates for migrant rights, Nabeel Rajab, who helped found one of the first migrants’ rights groups in the GCC in 2003. Rajab has been arbitrarily imprisoned and is awaiting trial, and the Bahraini government has played an ongoing role in suppressing his activism for migrant rights. GCC governments overall are not only unwilling to allow migrants’ voices to be heard, but they also fail to implement domestic legislation that is supposed to protect them. Hamzy noted that the lack of coordination between labor-importing and labor-exporting countries removes any oversight from the recruitment process, making foreign workers subjected to contract substitution and debt bondage, even before they arrive to the GCC for work. The GCC’s kafala system contributes t 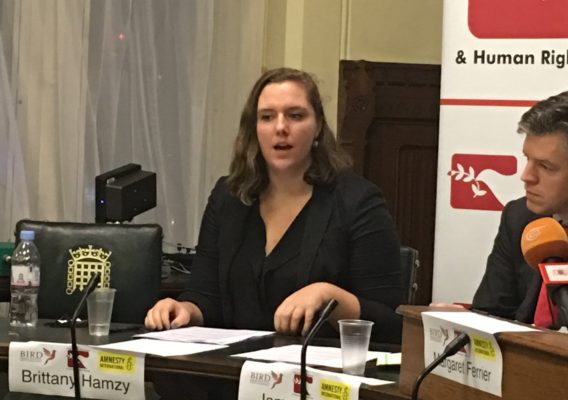 o the continuation of forced labor, which generally does not give legal rights to foreign workers who enter the GCC through this sponsorship system. She also described some of the extremely poor labor conditions in which migrant workers are placed, emphasizing that the mostly-female domestic migrant worker population is even more at risk of physical and mental abuse, due to being hidden in their employers’ homes. While GCC countries have some comprehensive anti-trafficking laws to prevent these abuses, convictions rates remain low due to officials’ inability to recognize primary indicators of trafficking. Hamzy implored Members of Parliament and other key players in the UK government to hold GCC government allies accountable for these human rights abuses.

Following this report overview, James Lynch of Amnesty International described his work regarding migrant labor in the GCC. He affirmed that GCC governments are willing to discuss human trafficking as a major regional issue, but are hesitant to expand the definition of trafficking to encompass not only the commercial sex industry, but labor exploitation as well. He noted that GCC officials are resistant to engage in conversations about male migrant laborers, because acknowledging them as trafficking victims would greatly expand the scope of their problem. Lynch also acknowledged the gap between state laws and implementation of those laws, which is exemplified by the large numbers of trafficking victims in foreign embassy shelters as opposed to official GCC government shelters. This shows that exploited individuals trust their country embassies, while official attempts to assist victims of trafficking are fruitless. With regards to domestic migrant workers in particular, there is an additional level of risk of trying to escape an employe 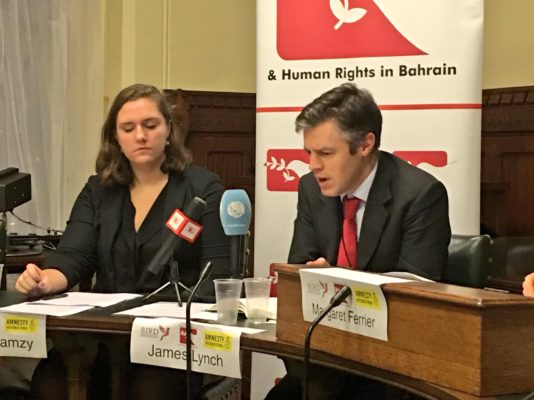 r’s home, as officials may return the victim to his or her employer and experience further abuse. If women report being raped by their employers, they may face a prison sentence for having extramarital relations. Lynch provided some illustrative examples of such cases that he encountered during his work in Qatar. He pointed out that this work resulted in two Amnesty International reports, one on domestic workers and one on construction workers. The report covering construction workers got significantly more media attention, indicating that we collectively need to pay more attention to unseen work forces.

The last speaker of the night was Parosha Chandran, who offered her thoughts on how best to combat human trafficking. She stated that the three pillars of human trafficking are prosecuting traffickers, helping victims, and implementing prevention strategies. She highlighted that something has to hold these three things together, and that is the partnerships between the state and civil society. Chandran cited a mistrust of authorities, as well as a deep fear from moving away from the exploitative condition, as underlying factors that prevent migrant workers from escaping abuse. These individuals often obtain massive debts to pay recruitment fees to agencies, beginning a process of ongoing indebtedness and vulnerability, and are then transferred to employers who create a situation of debt bondage. When these two circumstances collide, the trafficking victim in question has made a financial as well as a psychological investment in his or her situation. This allows trafficking and exploitation to flourish, Chandran explained. She also provided the legal definitions of human trafficking, and what conditions constitute a trafficking situation under the law. She stated that male sex trafficking is an unheard voice, as is the plight of men in general. Officials often fail to see this suffering, not just because it raises the number of acknowledged trafficking victims in the GCC, but also because society is reluctant to see male vulnerability. In closing, Chandran referenced anti-trafficking laws in the UK, and mentioned that only in 2009 did the UK fully criminalize forced labor and indentured servitude. Small, incremental steps had to be made in the UK, and the GCC must follow this same path to alter the culture, legislation, and lack of political will that leads to the success of human trafficking. 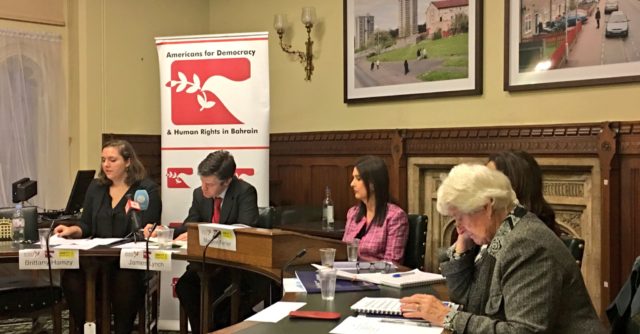